Media Exposure for Women’s Boxing Has Arrived
Written by: David A. Avila 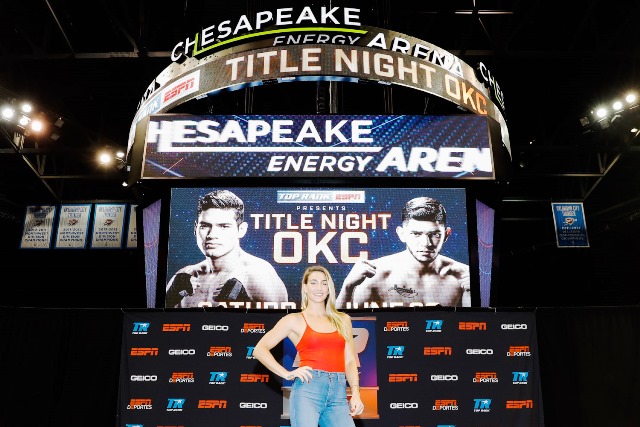 Watching Mikaela Mayer stretch her pro winning streak to six without a loss was a treat not offered on television or any other media outlet a mere two years ago.

Female prizefighting has gained footing in the sports universe and ultimately can remain a mainstay with the help of good promoting like Top Rank.

Mayer’s domination over Canada’s Sheena Kaine last Saturday was available on ESPN+ app and though it was expected to be a very close fight, the former American Olympian was simply too gifted and skilled for the gutsy foe.

Still, two other fights took place that begged to be seen on television or on streaming sites but were not.

In Maryland, a super flyweight clash between Tyrieshia Douglas and hard-hitting Helen Joseph took place last Friday. It was a female fight worthy of television but was not seen anywhere. The mere fact that both willingly accepted the fight without television showed their willingness to challenge themselves.

After 10 rounds the clash ended in a majority draw. Of course each side claimed victory but that’s expected in a close fight.

With all the available streaming apps available such as Facebook, Twitter and Instagram, it was not seen by many people anywhere. That’s a shame. Both fighters are extremely talented and America and the world need to see them.

Douglas, 29, a natural flyweight, has only one loss on her record and that took place in 2015 when she traveled to Argentina and fought the champion Leonela Yudica. The American has problems finding opponents especially with such a dearth of smaller weight women in the East.

Joseph, 29, packs power and two of her losses have come to world champions. The Nigerian native has fought as high as super featherweight and as low as super flyweight. Her height is an advantage and she has problems finding opponents too. Slowly her career is taking root.

Tiara Brown fought Brittany Cruz and stopped the Colorado boxer by technical knockout in the fifth round on Saturday. The lightweight fight took place at the Sphinx Club in D.C. and showcased the former US National Champion.

Brown, who usually fights as a featherweight, was recently signed by DiBella Entertainment. The featherweight division is pretty loaded in the East Coast and under her promoter’s umbrella expect to see her in the future on streaming sites.

One female fight that will be streamed live takes place on Saturday July 7, when two undefeated boxers face each other in the lightweight division.

Selina Barrios (3-0) faces Aida Satybaldinova (3-0-1) in an eight round lightweight clash at the American Bank Center in Corpus Christi, Texas. It will be streamed free on various web sites including our own www.thePrizefighters.com and other social media venues.

Both lightweights have had problems finding opposition especially in the western region of the U.S. Most of the female fighters in the west are 118 and smaller.

Barrios, 25, fights out of San Antonio, Texas and had an extensive amateur career. She is eager to fight anyone.

Satybaldinova, 30, fights out of Los Angeles, California but is originally from Kazakhstan. She also had an extensive amateur career and has fought four times in four times in three months. This will be number five.

Streaming this fight represents another notch on the belt for women’s boxing.

At press time, a fight card in Los Angeles was scheduled to feature undefeated light flyweight contender Seniesa “Super Bad” Estrada at the Belasco Theater in downtown. No opponent had been found as of Monday, but if one is discovered it will be shown on both RingTV.com and on Estrella TV.

So far Golden Boy Promotions which promotes Estrada, Marlen Esparza and Maricela Cornejo have been excellent about televising or streaming their female fighters. Cornejo is scheduled to fight next week on July 13 at the Novo Theater in L.A. The fight will also be streamed.

On Friday July 6, bantamweights Cherneka Johnson (9-0) and Siriphon Chanbuala (12-5-2) meet in a six round bout in Flemington, Victoria.

On Saturday July 7, super bantamweights April Adams (9-1-1) and Nurshahidah Roslie (8-1) meet in a 10 round contest in Mansfield, Queensland.

On Sunday July 8, middleweights Ema Kozin (13-0) and Mapule Ngubane (7-5-3) meet in a 10 round fight for the WIBA and WBF middleweight titles at Budapest.

On Saturday July 7, super featherweights Yareli Larios (13-1) and Magaly Rodriguez (18-5-1) meet in a 10 round clash in Guadalajara, Jalisco.

On Saturday July 7, super welterweights Alejandra Ayala (8-3) and Karen Garcia (2-0) meet in a six round fight at Tijuana, Mexico.

Aleksandra Vujovic (4-6-1) won by technical knockout in third round versus Marija Raznatovic (0-1) on Saturday June 30. The super lightweight fight took place in Budva.

Ellen Simwaka (7-3-2) won by technical knockout in the seventh round over Simangele Hadebe (4-2-2) on Saturday June 30. The bantamweight fight was held in Johannesburg.

Elin Cederros (4-0) won by technical knockout in round five against Klaudia Vigh (3-25-1) on Friday June 29. The super middleweight fight took place in Valencia.

Enerolisa De Leon (1-0-1) and Jessica Sanchez (1-5-3) fought to a draw after five rounds on Friday June 29. The featherweight fight was held in Madrid.

Urvashi Singh (2-0) won by knockout in round fourth versus Kanyanat Chotchun (0-1) on Thursday June 28. The bantamweight fight took place in Bangkok.

Jarusiri Rongmuang (2-0) won by majority decision over Sumalee Tongpootorn (8-10-1) after four rounds on Wednesday June 27. The super flyweight match was held in Bangkok.

On Sunday July 8, bantamweights Urvashi Singh (2-0) and Sumalee Tongpootorn (8-10-1) meet in an eight round contest at Bangkok. Also, light flyweights Jessebelle Pagaduan (9-1-1) and Saranyaphong Theinthong (1-11) meet in a six round fight.

On Sunday July 8, super featherweights Kallia Kourouni (9-1) and Kristine Shergold (5-6) meet in an eight round bout in Berkshire.

Kali Reis (14-7-1) was the winner by decision after eight rounds versus Paty Ramirez (11-6) on Saturday June 30. The welterweight fight was held in Uncasville, Conn.

On Saturday July 7, lightweights Selina Barrios (3-0) and Aida Satybaldinova (3-0-1) meet in an eight round clash at Corpus Christi, Texas.