Selina Barrios Wins Firefight in Texas by KO
Written by: David A. Avila 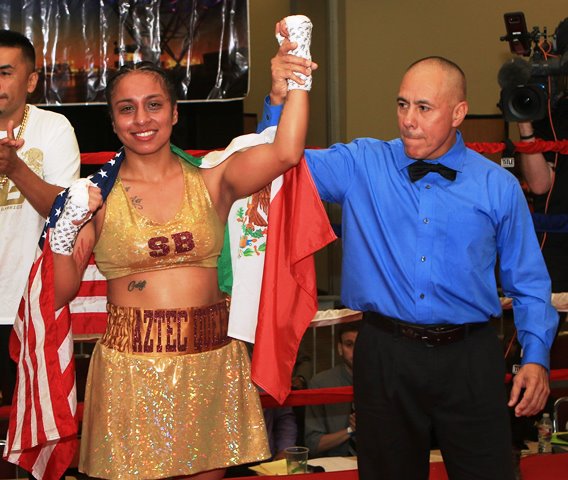 It was gasoline to fire as Selina Barrios won the battle of undefeated lightweights by surprise knockout over Aida Satybaldinova on Saturday.

Explosive is the key word.

Expectations were at the high octane level as Texas fighter Barrios (4-0, 2 KOs) handed Kazakhstan’s Satybaldinova (3-1-1) her first loss as a pro at the American Bank Center in Corpus Christi, Texas. The female clash was staged by Reyna Promotions.

As soon as the opening bell sounded the two lightweights attacked like junkyard dogs with punches flying and little regard for defense in the first round. Both connected but Barrios unleashed a three-punch combination at the 10-second warning to win the round.

Both fighters spent a lot of energy in the first round.

“To be honest I was just doing the combinations we were working on with my team,” said Barrios. “They said she was open.”

Barrios refused to sit down in her corner during the breaks and maybe it took a little of her energy as Satybaldinova seemed to connect more cleanly with right hands in round two. Though the punches never seemed to have serious effect, they did land. Barrios had her moments but not like in the first round.

“I knew from what I seen they said she was going to come straight forward she was an aggressive fighter,” said Barrios, 25, who holds the NABF lightweight title but it was not at stake in this fight. Nor was Satybaldinova’s WBF title.

In the third round Barrios quickly connected with a left hook that seemed to shake the Kazakhstan fighter momentarily. She quickly regained her senses and returned to exchanging freely with Barrios. But once again Barrios connected with a three-punch combination to finish the round.

“Like I told others, whatever I see open I throw,” said Barrios who lives and trains in San Antonio. “Sometime I just follow my instincts.”

Barrios seemed to find her timing and was looking to launch the left hook. Satybaldinova was swinging and ducking and trying to land her own big blows. The fighter known as “Lady Sparta” never stopped trying to connect with a big punch. After missing with one punch Satybaldinova pivoted and looked to land a blow when she ran into a Barrios left hook to the chin. Down she went for the count at 1:24 of the fourth round.

Barrios was the winner by knockout.

Her trainer Rick Nunez was happy with the result.

“She did exactly what we told her and she did it to the tee,” said Nunez.

After winning the battle of undefeated lightweights Barrios has eyes toward another undefeated fighter Mikaela Mayer who currently fights at the super featherweight division of 130 pounds. Barrios is fighting at 135 pounds. Still, Barrios wants the former Olympian.

“You can’t hide from me Mikaela,” said Barrios who was a former amateur champion.

“Actually I want to fight all the lightweights in my division,” she said. “I’m coming for you all.”

For Kazakhstan’s Satybaldinova it was a sad day. She had fought five times in four months after arriving in the U.S. It was her first time tasting defeat.

“I fought hard but didn’t get the victory tonight. Next time I will win,” said Satybaldinova, 30, who currently lives in Los Angeles. “I will continue to work hard and fight the best. I will never give up.”

The lightweight division can add two more to its growing ranks.