The Education of Seniesa Estrada: Boxing Savant
Written by: David A. Avila 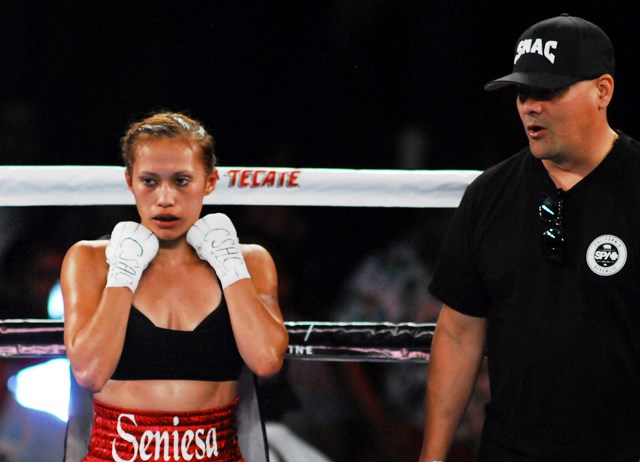 A quick glimpse of Seniesa Estrada walking in a hallway would lead most strangers to assume the petite figure might be a college student, a pharmaceutical salesperson, a young attorney, anything but one of the most dynamic prizefighters in the game today.

All those vocations are admirable, but fall short of quenching her thirst for conquest.

Since elementary school Estrada has zeroed in toward becoming one of the best female fighters on the planet. On Friday July 13, the undefeated Estrada (13-0) meets Ecuador’s Jhosep Vizcaino (7-6) in an eight round light flyweight fight at the Novo Theater in Los Angeles. ESPN will televise.

Combat is what Estrada lives to do and since childhood she’s been a sort of boxing savant.

“I can’t wait to get back in the ring,” she says adding that she knows little about her opponent.

“I saw about 20 seconds of her on YouTube,” Estrada said. “That’s all I need. I never know who I’m facing. It’s always been that way.”

Born and raised in East Los Angeles the diminutive Estrada at most weighs about 110 pounds. Since age eight, her lack of girth or height always presented a problem when seeking opponents to face in the boxing ring.

No problem, she just boxed the boys.

“When I first saw Seniesa spar she was about eight years old. I thought she was a boy with a pony-tail when I would catch her sparring and beating up boys,” said Sergio Mora, the former super welterweight world champion. “She would train with a southpaw kid named Frankie Gomez. I thought they were all special talent.”

During her amateur days finding opponents always was a challenge so bulking up to fight a bantamweight or featherweight would force Estrada and her father Joe Estrada to come up with last-minute adaptations.

“We did a lot of fighting of heavier girls because there were no other girls. I weighed in with keys in one pocket and cell phones in the other pocket. We did that so many times,” said Estrada, now 26, and still living in East Los Angeles. “Having that style and being aggressive it benefitted me a lot. But at the same time I had to move my head and use my natural instincts.”

Throughout the years her quickness and agility helped her compete with bigger and heavier opponents. Then she changed gyms from Boyle Heights to another in East L.A. on Whittier Boulevard. That’s where her team met Sergio Mora and his trainer Dean Campos. They had developed a different boxing style and it appealed to the Estradas.

“I would say Sergio Mora and I have a lot of similar movements. He’s more of a boxer than a puncher. I’m more of a puncher than a boxer,” Estrada says.

Campos has been Estrada’s primary trainer since 2008.

“When Dean started training her she adapted to our style pretty fast,” said Mora who like Estrada was raised in East L.A. “She was always agile and athletic, but Dean brought a professional element to it. More angles and body work.”

The change in Estrada’s style has brought criticism and applause depending on who you ask in the boxing world. But one fact remains, no one has figured out how to beat her.

“I can fight on the inside. I feel like when I use my boxing skills my style is more like Roy Jones, but I can fight in the inside,” Estrada says. “Inside fighting is what I do the best. Staying close to my opponent.”

Whether the opponent is heavier or taller the East Los Angeles fighter feels she has the advantage.

“One of my biggest strengths is intelligence in the ring,” Estrada says. “I can see what punches are coming and set up what I want to do.”

Adapting and dissecting opponents regardless of size has been a challenge the East L.A. millennial devours like others her age do when trying out a new Iphone. It makes her happy.

Against the bigger Carley Batey who walked in more than 12 pounds heavier than Estrada she lured the bigger girl and floored her.

“She fought Kaliesha West a bantamweight world champion and almost beat her,” said Estrada of Batey who she fought in 2015. “She was naturally much bigger. It was an overhand left that I used when I switched to a southpaw stance to drop her.”

Last September, at the StubHub Center, the undefeated Estrada met Mexican veteran Anahi Torres. It was expected to be a toss-up fight. Estrada dominated from the outside and picked her apart as easily as unraveling a banana peel.

Estrada won every round.

“I’ve always been a student of the game,” says the fighter also known as “Super Bad.” “I like to sit down and watch old tapes of fighters.”

Even as an eight year old Estrada would sit down and watch old tapes of boxing stalwarts such as Sugar Ray Leonard, Roberto Duran and Donald Curry.

“I still watch tapes of Willie Pep,” says Estrada with a chuckle.

It’s the kind of education that only a boxing savant could achieve.