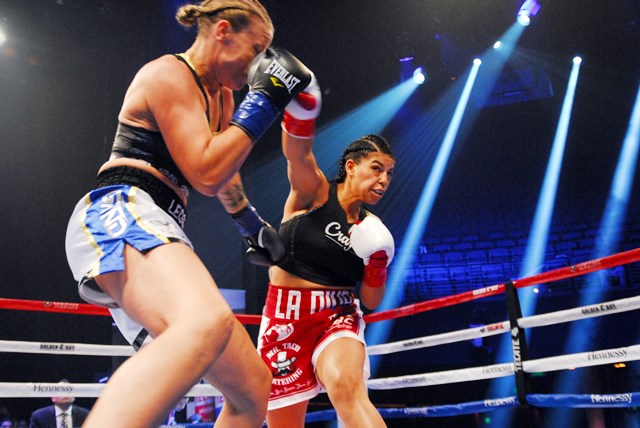 West Coast boxing finally had its turn to shine.

Light flyweight contender Seniesa “Super Bad “Estrada knocked out Jhosep Vizcaino of Ecuador in the third round with a body shot to the liver at the Novo Theater in downtown L.A. In an earlier bout Maricela “La Diva” Cornejo battered Samantha Pill until the fight was stopped in the third round of a super middleweight fight last Friday.

It was a showcase for female boxers but of course many were not satisfied.

After decades of fighting in the shadows, the fans of female boxing are impatient for contenders to face solid competition. They are eager to see East L.A’s Estrada fight Marlen Esparza or Kenia Enriquez. Or L.A.’s Cornejo fight San Francisco’s Raquel Miller or Claressa Shields. There’s nothing wrong with that.

But who is going to pay big money for them to fight?

Promoters would love to pit Cornejo against Miller in a middleweight or super middleweight clash, but those fighters don’t want to punch each other for a mere $3,000 apiece. Sure the fans don’t care but the fighters share after splitting that $3,000 with managers, trainers and nutritionists would amount to about $2,000 if that. Could you live on that for two months?

It’s a simple fact that fans don’t understand. Female fighters are not making money comparable to their male counterparts and the goal of promoters is to raise the fans awareness of women’s boxing. The more fights the better and the more televised fights better still. The end results will be bigger purses for female fighters.

Undefeated records alone don’t guarantee large purses and one or two fights a year won’t do it either. So far, promoters like DiBella Entertainment, Top Rank, Salita Promotions and Golden Boy Promotions have stepped up their game. But fans are still impatient with the building process.

The showdowns are coming you can count on it.

In less than two weeks Ireland’s vaunted Katie Taylor returns to the boxing ring to defend the IBF and WBA lightweight world titles against Kimberly Connor on Saturday July 28. The world title match takes place at the O2 Arena in London, England and will be shown on Sky TV in the United Kingdom. It’s a decent match but Connor was stopped by Amanda Serrano in the second round.

Napoleon, 32, was scheduled to fight a little over three weeks ago in a nontitle fight against Vashon Living, but the contest was scrapped due to last-minute problems. Now she’s in a bigger fight and against a solid fighter in Rankin. It will be Napoleon’s first defense of the title she won last March against Femke Hermans.

But this week another DiBella fighter takes center stage as Shelly Vincent fights Calixta Silgado on the super featherweight main event on Saturday July 21 at Foxwoods Resort in Mashuntucket, Conn.

Vincent fought Silgado last October and won by unanimous decision. The Rhode Island fighter is prepping for a showdown of immense proportions according to her promoter Lou DiBella.

“Must win fight for Shelly Vincent on Saturday,” said DiBella via Twitter on Monday. “With big announcement coming that will make boxing fans very happy.”

Could it be a rematch with Heather “The Heat” Hardy or a showdown with Amanda Serrano?

Actually there are a number of other options too for Vincent. She’s in a very talented division with boxers like Melissa St. Vil, Cindy Serrano and her sister Amanda living in training in the New York area. There are plenty of options.

On Monday July 16, featherweights Danila Ramos (5-0) and Alejandra Morales (2-16-3) meet in a six round fight at Buenos Aires.

Dolores Garcia (2-1) defeated Madison Blakely (0-1) by split decision after four rounds on Saturday July 14. The featherweight fight was held in a Belleville, Ontario.

On Saturday July 21, featherweights Dyana Vargas (4-0) and Diana Garcia (14-28) meet in a 10 round fight at Santiago de los Caballeros.

Elhem Mekhaled (10-0) was the winner by decision after six rounds versus Elise Bussiere (2-2) on Monday July 9. The featherweight took place at Vaulx-en-Velin.

Aniya Seki (34-3-2) was the victor by unanimous decision after 10 rounds at Csilla Nemedi (8-2) on Saturday July 14. The bantamweight title fight for the GBU and WIBF and WBC Silver titles took place at Offenburg. Also, Verena Kaiser (11-1) beat Mari Tatunashvili (4-5-2) in a super lightweight bout.

On Monday July 23, featherweights Kimika Miyoshi (13-10-1) and Wakako Fujiwara (5-2-2) meet in an eight round fight for the OPBF title at Tokyo. Also, minimum weights Kikuno Shinomiya (1-0) and Ageha Android (0-1) meet in a four round bout.

On Saturday July 21, welterweights Cecilia Braekhus (33-0) and Inna Sagaydakovskaya (7-0) meet in a 10 round world title fight at Moscow. Braekhus, 36, will be defending all the welterweight titles.

On Sunday July 22, bantamweights Sharadene Fortuin (10-1) and Asandiswa Nxokwana (6-2-1) meet in a 10 round regional title fight at Umtata.

On Friday July 20, featherweights Veronica Torres (1-0) and Kailyn Hansen (0-2) are set to meet for four three-minute rounds at Stockton, Calif.

On Saturday July 21, super featherweights Shelly Vincent (22-1) and Calixta Silgado (16-9-3) meet in an eight round contest at Mashantucket, Conn.

Stacey Copeland (5-0) was the winner by unanimous decision over Mapule Ngubane (7-6-3) after 10 rounds on Friday July 13. The super welterweight Commonwealth title fight was held at Harare.