Amaris Quintana Wins by KO Again in Tijuana
Written by: David A. Avila 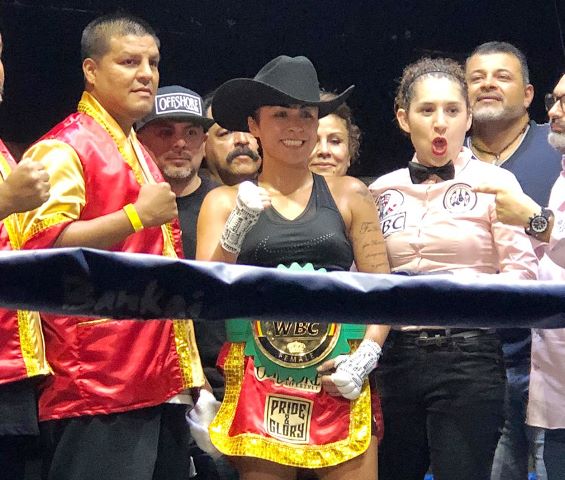 Last minute replacements, undefeated fighters, fighting across the border are just traps for other fighters, not for Amaris “Diamond Girl” Quintana who roared to a third consecutive knockout win.

Martinez, 37, walked in with a three-fight knockout streak and Quintana had a two-fight knockout streak. But immediately it was Quintana who forced the issue and used her experience of fighting world champions to work. It didn’t take long for the momentum to swing the San Diego fighter’s way.

After early exchanges a cut emerged over Martinez’s eye and when the second round culminated, the fight was stopped.

“She got a cut near her eye and they quit after the second round,” said Quintana, 28, who had her third fight this year.

Quintana claims her new team has helped work on her power and rebooting her fighting style that allowed her to compete with three world champions in the past including Sindy Amador, Melissa McMorrow and Kenia Enriquez.

“My biggest change has been my power,” Quintana said. “I have been working on my power and technique with my new trainers and it has been working.”

Her new trainers are Juan Estrada and Angel Estrada and along with her manager Alex Zamudio they have concentrated on carefully charting her comeback. Quintana looks at her last loss to Enriquez as motivation to return to the forefront. Winning a coveted title is a big start.

From 2009 to 2016 Quintana scored only one knockout after 13 pro bouts. Since her return she has fought three and all three ended by knockout.