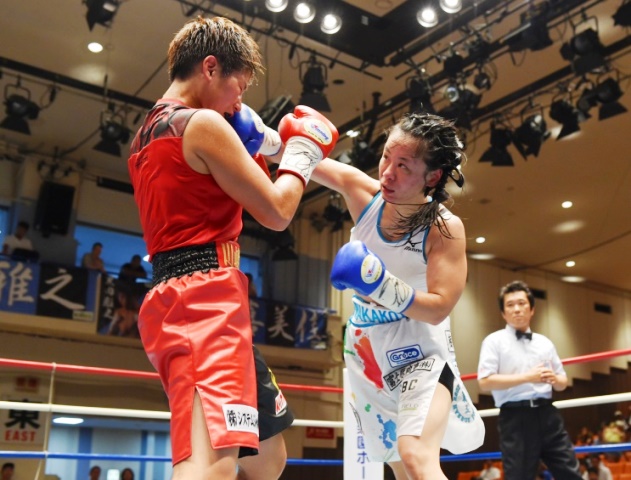 TOKYO, Japan-A 37-year-old mother of three kids surprised everyone including the defending champion at the famous Korakuen Hall in Tokyo this Monday night.

Many expected Miyoshi – whose career spans 10 years including three attempts for the world titles – to prove her superiority over Fujiwara who just started boxing for fitness six years ago. But it was Miyoshi’s first fight in 15 months, after two defeats in a row.

It was Fujiwara’s bold work that caught attention in the entertaining battle from the beginning. The defending champion started with heavy jabs to connect with right crosses and left hooks. The taller challenger, who appeared in the national mecca of boxing for the first time, watched for openings very well and used her advantage of longer arms to fire solid left hooks and right uppercuts with no hesitation.

While Miyoshi picked the pace up with her confidence with bottomless stamina and aggression in the second round, Fujiwara was never discouraged and kept winning rounds with powerful and accurate shots. Midway through the fight the scores were 39-37 by two judges and 40-36 officially announced after the fourth round according to OPBF rules.

Miyoshi dragged Fujiwara into a tougher fight to turn the tables in the later rounds, but the increased intensity could not slow the challenger down. The crowd-pleasing slugfest never faded until the gong sounded at the end of the contest.

“I am so relieved,” the new champion Fujiwara said with a green OPBF belt on her shoulder and unobtrusively smiled. She then proudly invited her children into the ring. The mother of two girls of 16 and 10, and a boy of 14, turned professional on October 2014 but lost her debut. She then won the first female national championship tournament by majority decision in the rematch with Asami Jinnari four months before, then upgraded her title this time with a big win over world level experienced Miyoshi.

“Coming to this point, I want to fight for a world title”, the old rookie Fujiwara declared.

On the other hand, this must be an unexpected loss for 34 year-old Miyoshi to put three black spots in a row on her record. She is known for her hard work and had won OPBF titles in three weight divisions in a 10 year career which started with 0-2 in the first year. After she took her first OPBF title at bantamweight from Riyo Togo, who had upset Mariana Juarez with a first round TKO, in 2013, she had challenged Yazmin Rivas, Shannon O’Connell and Hyun Mi Choi for their world titles. Her enthusiasm was still there to defend her OPBF title this time to aim for the fourth attempt at the top of the world. Her dream could possibly be taken over by the old newcomer.