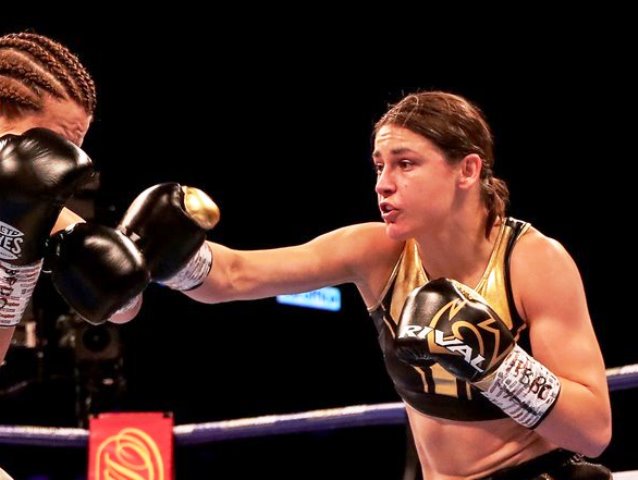 While Irish Katie Taylor vanquished American lightweight Kimberly Connor in England on Saturday, a battle between lightweight contenders in the U.S. saw Christina Linardatou edge Alycia Baumgardner by split decision. The sweepstakes are fully underway for who fights the IBF and WBA lightweight champion from Ireland.

American lightweights are lining up.

Linardatou, 30, lives in Greece, is a native of the Dominican Republic and currently trains in Philadelphia, Pa. She traveled to Louisville, Kentucky and faced 24-year-old Baumgardner whose promotion company staged the card. Linardatou won by majority decision in the eight-round lightweight clash.

The win by Linardatou puts her in the running as yet another possibility for the two-belt champion Taylor, who stopped Connor in the third round of their fight in London.

Next up for the speedy Taylor will be WBO featherweight titlist Cindy Serrano, the older sister of five-division world champion Amanda Serrano. Both will meet on Oct. 6 in Chicago, Illinois. The match will be streamed on the new DAZN apparatus.

Ironically, the Taylor-Serrano fight will be in the city where former Taylor foe Jessica McCaskill resides. The Chicago prizefighter nearly toppled the Irish champion with a left hook when they met late last year. More than a few would love a rematch of McCaskill and Taylor.

Serrano, 36, though she’s moving up two weight classes to meet Taylor for her world titles, is no slouch. After all, she spars with her sister daily and that’s about as good as it gets. She also has boxing skills.

Taylor, 32, has been carefully navigated by her promoters and management in facing boxers who lack speed or power with the exception of McCaskill. It’s been a carefully plotted course that has Taylor headed for a lucrative showdown against somebody. But who?

Amanda Serrano will be watching as both a fan and a potential foe when her sister Cindy steps into the boxing ring against Taylor. The younger sister Amanda already won the WBO lightweight world title back in 2014 when she knocked out Maria Elena Maderna in Argentina. Now Amanda Serrano is hunting for the super lightweight title and if things work out, that fight takes place in September. But Taylor chose Cindy Serrano for her next test.

So far Taylor has not faced an opponent who has a 50/50 chance of competing with her. In every fight so far the Irish boxer has been at least a 5 to 1 favorite. It’s why this boxing web site does not have her listed in the pound for pound list.

One foe who could possibly be a 50/50 fight is WBC lightweight champion Delfine Persoon.

Persoon, 33, is a police officer in Belgium and has held the lightweight title since December 2013. Taylor’s team has attempted to organize a unification bout with the Belgian fighter but so far no response. Not even a peep.

A Taylor versus Persoon clash would be a huge seller in Europe and makes sense. But Persoon’s team is tight lipped and not even the media can get a response.

Taylor has tremendous speed and footwork. She’s promoted by Matchroom Sport the British company headed by Eddie Hearn. The company recently signed a large contract with DAZN a streaming service. Money should not be a problem. But is Matchroom Sport willing to risk one of its stars?

One other fighter not mentioned before who poses a dangerous option is Southern California’s Mikaela Mayer. But at the moment, she’s looking for a world title in the 130-pound super featherweight division. Next year, however, it’s a strong possibility.

If Persoon can’t be found all Taylor’s team has to do is look to America the land of plenty.

Iara Cortes (5-2) was the winner by decision after four rounds against Adriana Maldonado (1-10-2) on Friday July 27. The featherweight fight took place in Quilmes.

On Friday Aug. 3, super bantamweights Nazarena Romero (2-0) and Marianela Ramirez (2-1) meet in a six round fight at Cordoba.

Deanha Hobbs (7-0) knocked out Aimee Addis (4-1) in the first round on Saturday July 28. The win gives Hobbs the Australian welterweight title took place in Newstead, Queensland.

Sarah Dwyer (3-4-1) won by knockout in the second round versus Donna Sadler (0-2) on Friday July 27. The super featherweight fight was held in Northbridge.

On Thursday Aug. 2, super middleweights Jasmina Merdic (3-2) and Stanislava Sinovec (0-0) meet in a six round fight at Kakanj.

On Sunday Aug. 5, featherweights Die Hu (7-1) and Olena Medvedenko (3-3) meet in an eight round fight at Macao.

On Saturday Aug. 4, bantamweights Yuko Henzan (6-6-4) and Fan Yin (3-0) meet in an eight round bout for a regional WBO title at Tomigusuku, Okinawa.

On Friday Aug. 3, super featherweights Sanjuana Vazquez (0-1) and Karina Jasso (3-2) meet in a four round bout at Matamoros.

Asanda Gingqi (2-0) knocked out Anele Ntsodo (2-3-1) in the second round on Sunday July 29. The featherweight bout was held in Eastern Cape.

Nozipho Bell (8-1-1) defeated Ndabayini Kholose (10-7) by decision after eight rounds on Friday July 27. The lightweight fight was held in Rustenburg.

Ireland’s Katie Taylor (10-0, 5 KOs) won by technical knockout in the third round over Kimberly Connor (13-4-2) on Saturday July 28. Taylor keeps the IBF and WBA lightweight titles. The match took place in London, England.

Christina Linardatou (10-1) defeated Alycia Baumgardner (6-1) by split decision after eight rounds on Saturday July 28. The lightweight match took place in Louisville, Kentucky. Linardatou, 30, fights out of Greece and has only one loss that was to WBC lightweight titlist Delfine Persoon by decision. Baumgardner, 24, fights out of Ohio and is promoted by Evander Holyfield.

Cristina Fuentes (9-9-6) and Briana Gonzalez (3-1-2) fought to a majority draw after six rounds on Friday July 27. The featherweight fight was held in Laredo, Texas. Also, Larizza Martinez (1-1) defeated Nina Gallegos (0-2) by decision in a four round super lightweight fight.

On Saturday Aug. 4, super bantamweights Shurretta Metcalf (3-3-1) and Mistery Neal (0-5) meet in a four round fight at Dallas, Texas.

On Wed. Aug. 8, super lightweights Elvina White (2-0) and Jasmine Clarkson (4-11) meet in a four round fight at Hollywood, California.

Yenifer Leon (9-0) knocked out Rosana Colmenarez (2-6) in the second round on Saturday July 28. The minimum weight fight took place in Turmero.