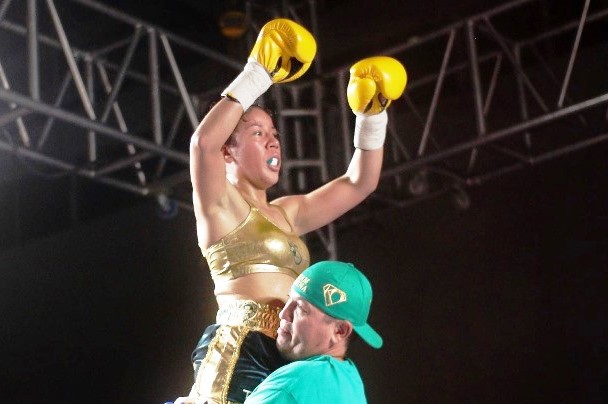 Urbina (7-0) returned to Tijuana where she made her pro debut two years ago and defeated Lesley Rodriguez (2-4-1) in a six round flyweight contest on Saturday, July 28. The former Mexican amateur champion showed off her new professional skills.

“Fighting in Tijuana is a great experience because many of the greats come from there and the crowd is so welcoming and loving I feel at home,” Urbina said.

At Tijuana’s Auditorio Municipal, the flyweight battle started slowly as Urbina probed and feinted slowly into firing range. Not many blows were landed except for the jabs by Urbina.

“In the first round I was just trying to figure out what my opponent had,” said Urbina, who lives and trains in Phoenix, Arizona. “I wanted to be smart and warm up.”

Like many Mexican fighters, Rodriguez had more fights than was listed on Boxrec or on other boxing listings. It’s a common factor especially with female fighters in Mexico.

The second round sparked the first real action as both fighters aggressively exchanged blows. After one skirmish Rodriguez emerged with blood dripping down from her nose. But the two female fighters were not shy about engaging.

Urbina moved in and out smoothly while punching with accuracy. She never stayed too long in the pocket and Rodriguez had problems countering. Body shots proved effective for Urbina.

“My first few fights the nerves would get the better of me. Now I am finally able to start controlling them and start adjusting my style, sitting down on my punches better and hunting down that body,” said Urbina.

As an amateur, Urbina was highly decorated with the Mexican national team. But the transition to the professional style can be a slippery slope for even the best amateur boxers. The smaller gloves, the lack of head gear and the increase in rounds has toppled many former amateur champions.

On Saturday night, Urbina was able to punch with power and snap while showing off defensive skills. It’s not an easy feat, but it’s the difference between an amateur and a professional.

“My husband (Andrews L. Soto) is my coach and he is very happy with how I fought,” said Urbina. “He says he saw a big improvement from other fights and I followed directions very well.”

Urbina kept the same recipe throughout the six round flyweight duel. Rodriguez had her best moment in the fourth round with left hooks to the body and a right to the head. But she never could find an antidote for the rapid combinations coming from Urbina.

“This is the first performance as a pro that I feel happy with, I feel I did my job well and dominated every single round,” said Urbina, 28. “However I always look for what I have to keep working on and there’s a lot more needed to win fights like these by KO.”

On Saturday, fans in Tijuana saw Urbina make the clear change from amateur boxer to prizefighter.