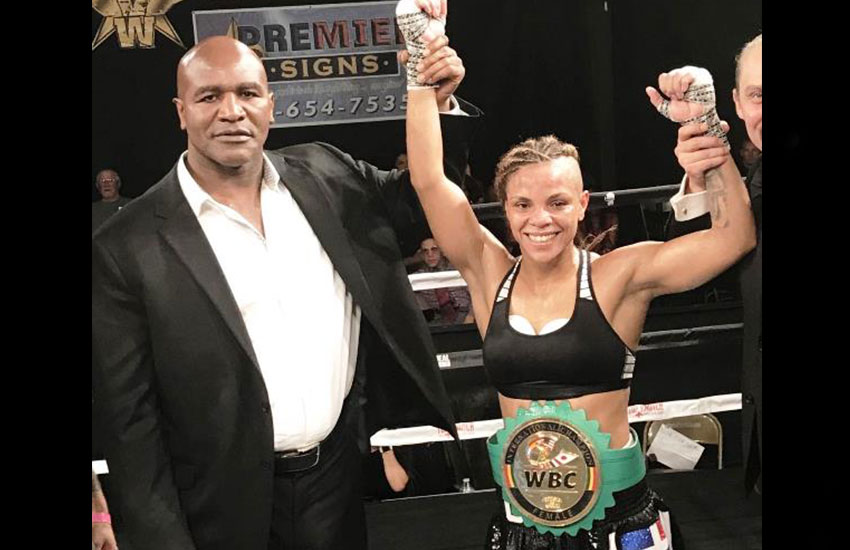 Greek fighter Christina Linardatou came, she saw and she conquered in her first visit to America.

Linardatou (10-1, 5 KOs) arrived from Athens, Greece with no fanfare and full of confidence to upset American fighter Alycia Baumgardner (6-1, 4 KOs) by split decision after eight rounds on Saturday July 28. She picked up the WBC International lightweight title with the win.

Though the lightweight title fight took place in Louisville, Kentucky home of the great Muhammad Ali and promoted by another heavyweight great Evander Holyfield, it was Linardatou’s moment and she took advantage.

It had been almost two years since Linardatou had fought and her team decided to make a move. The Greek team signed with American boxing manager Brian Cohen and arrived in Philadelphia to prepare for the title fight. No buffer fight needed.

“I signed with Brian because I wasn’t getting any fights. I had not fought in almost two years,” said Linardatou who was born in Dominican Republic but moved to Greece years ago. She speaks Spanish and Greek.

After spending several weeks in Philadelphia preparing for the fight, the team was confident. Linardatou had previously fought for the WBC lightweight world title against champion Delfine Persoon in 2016 and lost by decision after 10 rounds. She was believed in her own skills.

“I used to be a kickboxer but when I started boxing I learned I had many defects for a boxer especially in my defense,” Linardatou, 30, said. “I like learning how to throw three and four-punch combinations. It’s very complicated. It’s what I love about boxing.”

Baumgardner, 24, lives in Fremont, Ohio which is about 310 miles from Louisville and was basically the hometown fighter. She entered the boxing ring undefeated and with amateur experience that included winning national titles.

When the first bell rang Linardatou was on attack with her bob and weave style and Baumgardner was coolly using her jab and movement to keep her distance. That first round saw few punches landed but Baumgardner was effective with her jab.

As Linardatou returned to her corner she was given directions for the second round. It must have included using a jab to work her way into punching distance.

In the second round Linardatou began pumping out jabs that worked more than well and allowed her to connect with her sidewinder rights and lefts. Several punches seemed to shake Baumgardner and at the end of the round it was obvious that Linardatou had won the round.

For the next several rounds Linardatou attacked with her bob and weave style and Baumgardner looked to fend off the attacks with jabs and movement. But the jabs coming from the American fighter were merely touches and had no snap. That allowed the Greek-Dominican fighter to walk through the jabs and score at will. Baumgardner’s head snapped back many times from the blows.

The last three rounds saw Baumgardner trying to use a hold and hit tactic but she tired from the effort. Finally, in the eighth and final round, Baumgardner mustered up steam on her punches and managed to connect with clear blows. But was it enough?

One judge scored it 77-75 for Baumgardner and the other two 77-75 for Linardatou who showed immediate joy at the announcement. She was handed the green WBC belt and gleefully posed with the promoter Holyfield.

“She was a very strong fighter and fast. She fought me aggressively and I like that,” said Linardatou about Baumgardner. “It was my first time fighting in the US. Baumgardner was very good.”

Cohen, who along with Emmanuel Lavdakis co-manages Linardatou, said they plan to have her return within the next two months.

“She’s like a Tasmanian devil,” said Cohen about her fighting style.

“My goals are to win a world championship. I want to fight in as many divisions as I can,” said Linardatou adding that she can fight from 130 to 140. “I want to fight the best fighters in the world.”

She wants to conquer the fight world.