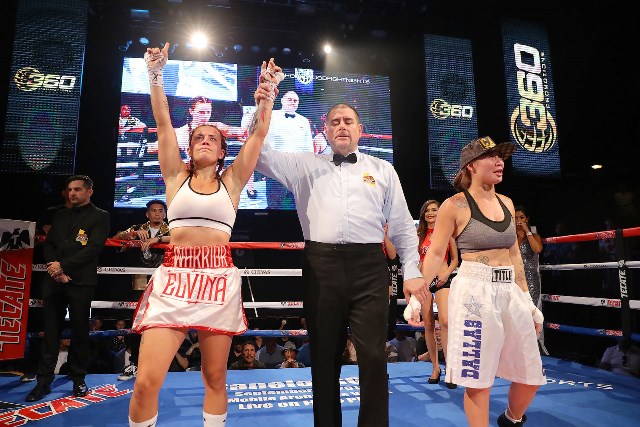 HOLLYWOOD, Ca.-It was another amazing show from 360 Boxing Promotions especially for women’s boxing.

Elvina White (3-0) made her return once again on Wednesday August 8th at the Avalon Hollywood and defeated Jasmine Clarkson (4-12) in four round super lightweight match. But it was much closer than the scores showed.

White had recently fought in June in defeating the much smaller Annette Pabello of Mexico on the previous 360 Boxing Promotions card. Tom Loeffler, the promoter, is one of the few who keeps supporting woman’s boxing by having at least one female bout on every card.

A native of Austria, 24-year-old White left her country four years ago in search of her dream of becoming a professional boxer and someday a world champion.

In her two fights in Los Angeles, the Austrian native has been the bigger looking fighter. Once again she entered the boxing ring with a physical size advantage against Dallas, Texas boxer Clarkson.

Clarkson, 23, fights out of a southpaw stance and a few hours before the fight she was already warming up and looking focused and ready to perform. And when the first bell rang that’s exactly what she did.

The left-handed boxer Clarkson was the busier fighter throwing more punches, coming forward, moving in and out and not giving an easy fight to White.

White had the stronger punches and every time she connected her power was evident. But she was unable to pinpoint more than one clean blow against Clarkson whose ability to slip and block was clear. And when White stayed in front, Clarkson landed quick combinations. It was a recipe that repeated itself throughout the four-round fight.

Clarkson was the quicker fighter, but had to be alert for White’s powerful blows. While Clarkson landed right hooks and jabs White was connecting with strong one-two combinations in the second round. Though not many blows connected, White’s were the more pronounced.

After two rounds of mostly defense and counters, Clarkson began moving in for more action and was pretty successful with straight lefts and right hooks. The uptick in aggression surprised White who froze momentarily trying to figure out what to do. It was Clarkson’s best round and showed that her experience against former world champions was valuable against the bigger White.

The fourth and final round saw both increase their aggression with White landing a hard right cross. Clarkson relied more on quick one-two combinations and right hooks. Though Clarkson clearly landed more blows than White, it was the bigger fighter’s power that impressed the three judges as all saw her the winner 39-37.

Overall it was a competitive fight that saw White remain undefeated so far. Clarkson was not happy with the decision.