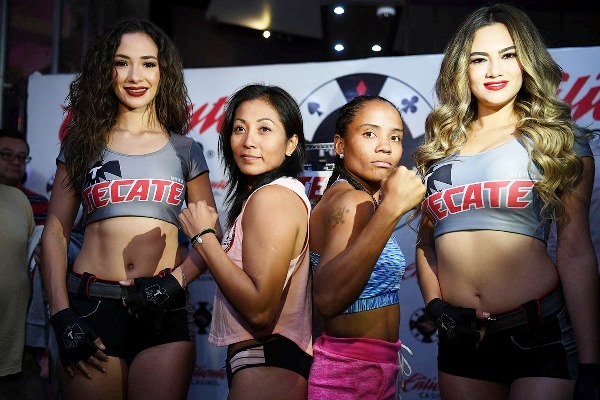 Ortiz vs Leon: “Avispa” Looks To Sting A Lion

For all of 2017 there were talks that long-reigning 105-pound queen Anabel “Avispa” Ortiz (27-3, 4KO) would be leaving her strawweight hive and jumping to the light flyweight division in hopes of another world title in a different weight class.

Now eight months into the current year and Ortiz is still is defending her WBA strap.  This Saturday night it will be against undefeated Venezuelan Yenifer “Negrita” Leon (9-0, 6KO) in the scheduled main event from Chihuahua, Mexico.

The ten rounder will be televised live in Mexico by the Azteca channel and presented by Zanfer Promotions.

The night will mark the 32 year-old Ortiz’s ninth defense of the title she won back in the summer of 2013 with a hard fought split decision against Japan’s Etsuko Tada but only her second fight of this year.  Since winning the title Ortiz has gone 15-0, 2KO, with eight of those wins title defenses against the likes of Nana Yoshikawa, Sandra Robles, Katia Gutierrez, Jolene Blackshear, Debora Rengifo and Nancy Franco.

Her current strap is the second one that Ortiz of Mexico City, by way of Tepic, holds previously capturing the WBC strawweight green and gold belt in 2010 in only her ninth fight in her first win in Japan, that time against Nanako Kikuchi.

Ortiz has fought outside her native Mexico five times going 4-2 on foreign soil.  Two out of her three losses have come outside of her native Mexico, the first against the great Naoko Fujioka in her first defense of her WBC title and the second against the legendary Yesica “Tutti” Bopp in a bid for the WBA and WBO light flyweight titles in Argentina in May of 2012.  Her first ever pro loss was against Ibeth Zamora in ’08.

The championship bout against Leon is Ortiz’s second of 2018 after going 3-0 in 2017 and 4-0, 1KO, in 2016.  In March Ortiz defeated another Venezuelan in Deborah Rengifo via a lopsided ten round unanimous decision in a non-title bout.  Ortiz boxed in the first half and pressured in the second.  In late 2016 Ortiz had defeated Rengifo via another unanimous decision.  The scores 100-90, 99-91 and 98-92.

“I am very motivated for what is next,” the mother of two stated at the last press conference before the event this Saturday night.  “First is this defense and then I want to win titles at 108 and 112 pounds.  I want to make history and I have a lot of plans but first I need to beat the Venezuelan.”

While Ortiz has gotten quite a number of stamps on her passport, Saturday night is her opponent’s, the 26 year-old Leon, first out of her native country of Venezuela.  The fight against Ortiz will be Yenifer’s first step up in competition since she has not fought anybody of note in a pro career that began in July of 2016 with a second round knockout of unknown Luisa Bello.

Since then the southpaw Leon has fought an array of first timers and no-hopers in padding her undefeated record with only 23 pro rounds under her belt.  Now she will challenge one of the longest reigning champions in the lower weight classes who had amassed nearly 40 rounds by her fifth fight as a professional.

“It is very clear Ortiz has a lot more experience than I do,” Leon said recently from her training camp.  “I do have some advantages, I am younger, I am fresher, I have power in both fists, I am a southpaw and the most important, I am hungry to be a world champion.  I will become a world champion and come back to Venezuela with the belt.”