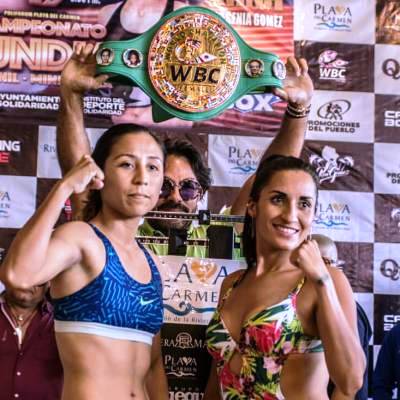 Moreno vs Gomez: Ready For Another War

It is hard to believe that at 31 years of age the current WBC light flyweight champion Esmeralda “La Joya” Moreno (35-10-2, 11KO) of Mexico City is a 13-year fight veteran with nearly 50 fights under her belt.

This Saturday night she will have one of her toughest as she looks to defend her green and gold belt against the younger Yesenia “Niña” Gomez (13-5-3, 6KO) of Cancun, Mexico, in the 10-round main event by the biggest terrestrial network in Mexico, Televisa.  The night is presented by Promociones Del Pueblo in Cancun, Mexico, hometown of the challenger.

“For me that is nothing new,” the champion said of fighting in her opponent’s backyard.  “The majority of my fights have been in the home of my opponents and with everything against me.  For me it is strange to fight in my home city.  I am not afraid and I like the fact the pressure is not on me, helps me focus even more.”

“When I won the national championship the fight was three streets over from my opponent’s house,” Moreno continued.  “The same when I won the super flyweight title. I am not intimidated by being in my opponent’s hometown.  I want to win the Cancun crowd over when I get my hand raised on Saturday night.”

In their last match last May, held as well in nearby Playa del Carmen and the last fight for both, they waged a no-quartered war for 10 hellacious rounds that ended in a majority draw.  One judge saw it wide for Gomez with a score of 97-93 but was overruled by the other two who turned in scorecards of 95-95 each.

“The pressure is on her,” Moreno continued.  “Her home crowd expect her to win and for her to look good doing it.  I only have to do my work.  I have to take advantage of the opportunities presented to me, win all the rounds clearly and if there is an opportunity for the knockout, take it.  It is a tough fight but my experience will be the defining factor.”

The veteran champion is now is looking to put any doubt to rest of why she is the rightful ruler of the 108-pounds while Gomez wants to prove that Moreno’s time is up.

Moreno is one of the most decorated current female fighters in Mexico having held the WBC Silver 108-pound title since 2011 when she captured it with a decisive win over Jessica “Kika” Chavez.  In 2012 the mother of one captured the full-fledged version with a win over Japan’s Noami Togashi.  Despite fighting nine times after a championship win, she only defended the title once before dropping it to Ibeth “Roca” Zamora in 2015.  Since that loss Moreno has gone 4-2-1, 1KO, scoring wins over Yesenia Martinez Castrejon, Eva Voraberger, Melissa McMorrow and Zamora.  With the wins over former champs McMorrow and Zamora, Moreno found herself in the final of the WBC flyweight tournament where she lost a war in the best fight of 2016 against arch-nemesis “Kika” Chavez.  In the rematch a little over a year later Moreno was bested via a unanimous decision while going down once in the 7th.

Against the younger Gomez she found herself an aggressive rival who wasn’t impressed or intimidated by her experience. Gomez attacked her older opponent while Moreno pulled out every skill out of her tool box to walk away with the draw.

“We both deserve this fight because neither one of us was happy with the last result,” Moreno explained.  “I think this is our best chance to get a winner.  It is going to be a great fight.”

Gomez, a pro since mid-2011, doesn’t come close to the world-class experience of Moreno.  In fact her first opportunity for a world title was against Moreno last year and before that her biggest claim to fame was a no-contest against Lourdes “Pequeña Lulu” Juarez in 2016 and two close draws against Jackie Calvo in 2017.  Her biggest win came in March of 2013 when she beat an undefeated Arely Valente for the WBC Youth title at flyweight, but lost a majority decision and the title two fights later in the rematch.

In preparation for the fight Gomez decided to change some aspects of her camp beginning with the location.

“I have trained for five weeks in Mexico City,” she explained.  “At first it was a bit tough because the change in altitude because I have always trained in Cancun.  Now if they told me the fight was tomorrow, I would be ready since my condition is great and my weight is on point.”

“It is an honor to face a champion that I admire,” Gomez said during her turn at the final press conference held in Cancun.  “This is my time and I have always wanted to be world champion.  In the first fight I learned I had certain skills that I didn’t know I possessed.  That wasn’t enough for me and I decided to get ready in Mexico City for this fight which is a guaranteed war.”

Being the home fighter and despite being the challenger, Gomez had the final word in front of the press, “This is my time and I am going to be a world champion.  I will do my work and what the champion says doesn’t affect me.  I like to box intelligently and whoever is more intelligent is the one that is going to win.  That belt is looking to look great around my waist.”