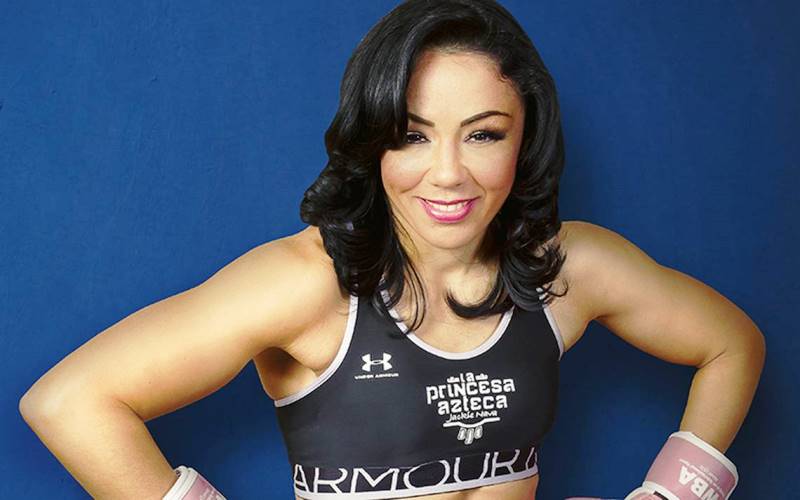 This past summer the female boxing world was dangled a carrot but as quickly as it was offered, it was pulled away.

Back in August Mariana “Barbie” Juarez (51-9-4, 18KO) and Jackie “Aztec Princess” Nava (34-4-3, 15KO) shared a bill in Mexico City as the first step towards an eventual match up this year.  After their victories that night it was made official they would square off on October 27th.

That day came and went.

Juarez of Mexico City did find herself in a ring that night but it wasn’t against Tijuana, Mexico’s Nava.  Juarez successfully defended her WBC bantamweight title against veteran Susi Ramadan via a unanimous decision over ten rounds live on Mexican mega network Televisa.

Soon after Juarez made the announcement her late October opponent was Ramadan and not Nava, promoter Zanfer unleashed the news the Tijuana fighter was going after her ninth title in her hometown Tijuana,Mexico against Venezuelan Carolina “Fiera” Alvarez (14-9-4, 9KO) on Saturday, November 10th, live on the Azteca channel in Mexico as the main event.

“All opponents are dangerous and Alvarez is as well,” Nava stated from the mountains of central Mexico where she held her camp.  “She has come to Mexico before, she has a lot of experience.  We need to do our job because any opponent who you give an opening to will look to take advantage of it and I expect for her to do just that.  She is strong but not too fast.  She might have studied me and might know what I will do but she won’t know when, that is the key.”

Featured in the semi-main event of the night Yazmin Rivas (38-10-1, 11KO) of Mexico will defend her legitimate 122 pound WBA world title against Cristina del Valle Pacheco (11-11-2, 2KO) of Argentina.

The title that has been announced that Nava and Alvarez will be disputing is a WBA bantamweight belt but what version has not been made clear.  As of this post the current WBA 118-pound champion is Mayerlin Rivas of Venezuela with Colombian Dayana Cordero as the interim title holder.

Regardless of the title Nava has achieved enough to be considered a legend in female boxing but not surprisingly, ever humble, Nava doesn’t see it that way. “I don’t consider myself a legend.  I still have some goals I need to achieve.  I do my work, I enjoy it, if fighters who are starting see me as one it surprises me, but it is good to know that my work motivates them.”

The scheduled ten-round bout on Saturday night marks the third fight in Nava’s comeback after a two-year hiatus to give birth to her second daughter and also make a successful bid as a senator in the Mexican government.

Many thought Nava, who also moonlights as an architect, was going to retire but she made her triumphant return in February of last year with a unanimous decision over Ana Maria Lozano for the vacant WBC International 122-pound title.  She stopped Alys Sanchez last August in seven to set up the fight with Juarez.

The 38-yearold Nava is no stranger to the limelight having won her first title back in 2004, ironically the same one she will be disputing against Alvarez, the WBA 118-pound belt.  She then went on to win the WBC version at 122 pounds and earning the distinction as the first female champion of that sanctioning body.  Wins over the likes of Yazmin Rivas, Chantall Martinez and Jennifer Salinas as well as losses to Alejandra “Locomotora” Oliveras and Marcela “Tigresa” Acuña only cemented her place as one of the best of her generation.

It wasn’t until two fights against fellow Mexican Ana Maria Torres that Nava, as well as Torres, were catapulted to atmospheric levels of fame at least in their native Mexico.

From then on Nava sold out any venue she presented herself and broke ratings records on the Azteca channel with wins over Edith Matthysse, Lisa Brown and Alicia Ashley among others.

Nava has not fought at 118-pound limit since 2006.  “I have felt better training at a lower weight.  We are faster looking to be more accurate, more movement, a lot more boxing and above all, a much bigger will to win.”

The fight Saturday night brings her back to her native Tijuana, a city she has not fought near since 2015 when she defeated Argentinean Mayra Gomez in Rosarito, Mexico.

“I am anxious,” she said with a smile.  “I am happy seeing the results we got from our training.  Everything is going well and our objective is to win that bantamweight title.  We want to achieve the most that I can before my body tells me to stop.  I do it for my own satisfaction and I’m not looking to be better than anybody else or break any records.”

In the 40 year-old Alvarez of Venezuela, Nava will not face anything she has not seen before and Carolina might be the easiest opponent she has faced in her comeback trail.  Alvarez owns nine losses with most of them against elite competition but at much lower weights than the 118 pounds she will be facing Nava this Saturday night.

Alvarez, a world traveler whose fights have taken her to numerous countries around the world, has dropped decisions to Maria Krivoshapkina, Arely Mucino, Gabriela Bouvier and Leonela Paola Yudica at flyweight, but was stopped by Susi Kentikian and Mariana Juarez at 112 pounds while Yesica “Tutti” Bopp knocked her out at 108 pounds.  Her latest loss back in March was against Carolina Rodriguez at 116.5 pounds.  She is coming off a win in her last fight, an eight round unanimous decision in Venezuela against Rosana Colmenarez last June.

“This is my second fight at bantamweight,” Alvarez said while training in Venezuela.  “I know I have a tough opponent in front of me but I have prepared myself well both physically and mentally.”

Despite the odds against her Alvarez says she only has one objective, to ruin Nava’s party in her hometown.  “Jackie Nava is a great fighter, a legend and a win against her will give my career a big push.  I respect her but this is a business and I am here to knock her out to avoid the judges giving her the win.”

As far as the fight against Juarez, Nava says she knows as much as the public why it didn’t happen last month.

“It was half way done,” she said at the final press conference before her fight this Saturday night.  “I don’t know exactly what happened with the negotiations.  I think it was a lack of respect them announcing she was having another fight before telling me our fight was off.  Maybe it happens next year.  Maybe in February or March but first I have to talk to my team.”