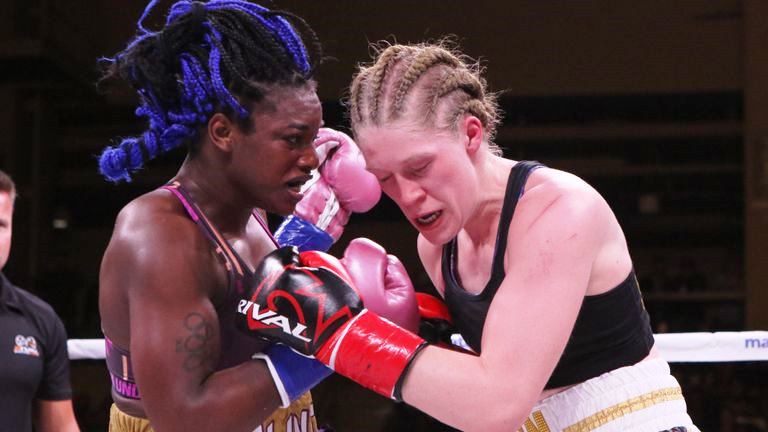 A sharp and poised Claressa Shields beat challenger Hannah Rankin in every round with powerfully placed shots in adding the WBC middleweight title to the two others already in her possession on Saturday.

Shields (7-0, 2 KOs) showed the Kansas boxing crowd just how she’s managed to accumulate so many world titles with a precision attack against the gritty Rankin (5-3) of Scotland. She now holds the WBC, IBF and WBA middleweight world titles.

“She was tough,” said Shields of Rankin. The world title fight was streamed by DAZN.

Next up could be former WBC champion Christina Hammer who had been scheduled to face Shields but was derailed by illness. It now looks like the two undefeated middleweights will face each other early next year.

In this fight Shields fought Hammer’s sparring partner Rankin and was very measured and calm instead of firing the frenetic combinations seen in her prior fights. She was showing the pro style learned under new trainer John David Jackson and she looked dangerous.

Instead of the dazzling blur of speedy combinations, Shields stalked the slightly taller Rankin patiently and when she fired punches they arrived with force.

“This fight I was able to explode when I needed to,” said Shields. “We worked on placing my shots.”

After a slow-paced first round Shields stepped up the tempo a tick in the second round and staggered Rankin with a well-placed overhand right. The blow came as the bell ended the round.

Shields also showed some powerful body shots throughout the fight and connected with more left hooks than ever before. It forced Rankin into a more defensive mode but the Scottish fighter never seemed inclined to quit, but was unable to find an antidote for the Shields firepower.

Despite only seven pro fights Shields has jumped to another quadrant in female boxing and it was never more evident than against Rankin. The two-time Olympic gold medalist has stripped away the amateur style and now looks like a deadly fighting machine.

Rankin showed a solid chin and gritty determination against Shields and though she was out-gunned in every round, the musician/fighter slugged it out when necessary. It was great preparation for Shields who looks to continue dominating the female fight world though only 23 years old.

“I’m happy with my performance,” Shields said. “I give myself a B-plus.”

It’s Hammer time and Shields looks even more ready than six months ago when she was knocked down by Costa Rica’s Hanna Gabriels and still won.

“She’s going to get worse than that,” said Shields of potential foe Hammer.

But of Rankin there was thankfulness for saving the fight date and allowing female boxing to keep going.

“She has a lot of potential. I respect her,” said Shields.

And for the rest of the world:

“I’m the greatest woman of all time,” said Shields. “If you can’t find a girl that can beat me, then, I am.”

The middleweight division is now Shields.