Claressa Shields Wins Fighter of the Year for 2018
Written by: David A. Avila 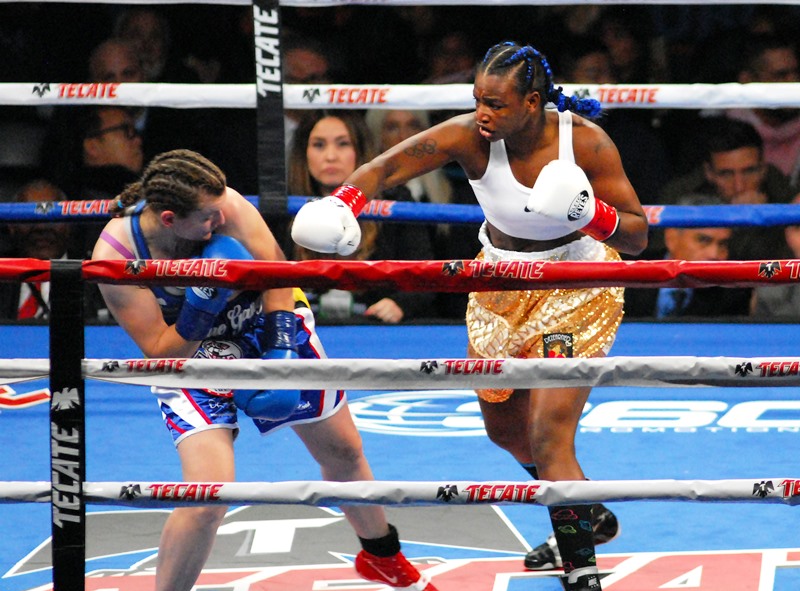 Fighter of the Year is Claressa Shields for ThePrizefighters.com

This has been the pinnacle year for women’s prizefighting. Never before has female boxing had as much exposure.

In the month of December alone we saw several of the top female boxers in the world show off their talent before wide audiences on television, streaming and big promotional boxing cards.

The one boxer who stood out is this year’s Female Fighter of the Year, the WBA, WBC and IBF middleweight champion of the world Claressa Shields.

Shields, 23, fought four times during the year including a defense of her super middleweight world titles. She then dropped down to middleweight where she met super welterweight world champion Hanna Gabriels, who moved up a division, and the two engaged in a spectacular shootout that left the television audience and those in attendance awestruck.

Despite getting knocked down for the first time in her boxing life, Shields rallied furiously to win the vacant IBF and WBA middleweight titles against the talented Costa Rican fighter Gabriels. Those who saw the fight finally saw the skillful capabilities of female prizefighting on fiery display.

She then fought Scotland’s Hannah Rankin in November and whitewashed the gritty and taller fighter to win by unanimous decision and add the WBC middleweight titles to her collection that includes the IBF and WBA versions. Then, a week later, Shields accepted another challenge to her titles weeks later at the StubHub Center in Los Angeles on December 8. On the final HBO boxing telecast, Shields thoroughly defeated Belgium’s Femke Hermans by unanimous decision to retain the middleweight world championship.

Her willingness to accept all challenges in two weight classes has driven women’s boxing in America to greater heights.

It’s fighters like Shields who show no fear and are eager to drive the sport of female prizefighting to bigger platforms that are important to the sport. She’s like a human hammer who relentlessly keeps pounding away at closed doors.

Shields is the 2018 Fighter of the Year for ThePrizefighters.com.

Others considered were: Norway’s Cecilia Braekhus who fought three times in the year including two fights on HBO. Her welterweight world championship fight with Kali Reis was a top contest in 2018 and saw her rally from her first career knockdown to win by unanimous decision. Her last fight against Aleksandra Lopes was HBO’s final boxing show.

France’s Maiva Hamadouche fought three times including a firefight last week against Brazil’s super tough Viviane Obenauf in a super featherweight clash. The fight ended in a stoppage after the fifth round but was pure action throughout. Hamadouche is famous for her relentless attacks.

Ireland’s Katie Taylor had a busy year with four fights in 2018. In her last two fights she defended the IBF and WBA lightweight titles and won every round against super feather titlist Eva Wahlstrom and featherweight titlist Cindy Serrano. She stopped lightweight Kimberly Connor in three and handled Argentina’s Victoria Bustos. It was a very good year that saw her perform in the United Kingdom and the United States.

But this year was the year of Claressa Shields. For this writer, watching her perform in in person was eye-opening. Her boxing skills are definitely on an elite level and once she’s fully adapted to the pro style she might be unbeatable for many years.

Marcela Acuna (49-7-1) knocked out Yenifer Rodriguez (9-3-2) in the fifth round on Saturday Dec. 15. The IBF super bantamweight world title fight was held at La Rioja. It was Acuna’s second defense of the title since re-acquiring the title after losing to Daniela Bermudez in April.

On Saturday Dec. 22, light flyweights Anyelen Espinosa (7-0) and Ayelen Granadino (3-0) meet in a six round fight at Buenos Aires.

Deanha Hobbs (8-0) beat Baby Nansen (7-4-1) by unanimous decision after eight rounds on Saturday Dec. 15. The super featherweight title fight was held at Brisbane, Queensland. Also, Jessica Retallack (2-0) knocked out Siriphon Chanbuala (12-8-2) in the first round of their featherweight fight.

On Saturday Dec. 22, lightweights Estelle Mossely (2-0) and Sylwia Maksym (2-5) meet in an eight round fight at Deauville.

Tina Rupprecht (9-0) was the winner by decision after 10 rounds versus Niorkis Carreno (9-1) on Saturday Dec. 15. The WBC minimum weight world title fight was held at Bayern. It was her first defense of the title.

Ilaria Scopece (8-0) beat Snezana Siljkovic (1-1-1) by decision after four rounds on Sunday Dec. 16. The flyweight bout was held at Lombard.

Anahi Zamora (2-0) won by disqualification in round one over Erica Cruz (9-2) on Saturday Dec. 15. The featherweight match took place at Distrito Federal, Mexico City.

Monica Cruz (1-0) won by knockout in the fourth round over Yaremis Reluz (0-2) on Saturday Dec. 15. The featherweight match took place in Colon City.

On Sunday Dec. 23, super flyweights Sofie Abraamyan (1-1) and Tamar Nazarashvili (5-5) meet in a six round contest in Moscow.