Knockout Puncher of the Year is Adelaida “La Cobra” Ruiz
Written by: David A. Avila 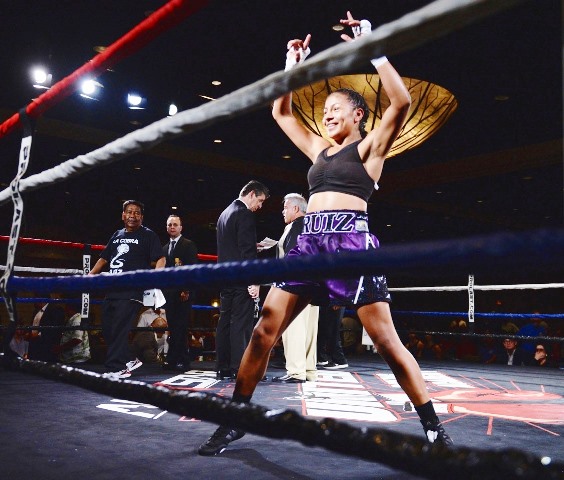 Knockout Puncher of the Year is Adelaida Ruiz; plus three best KOs of 2018

One of the main complaints boxing fans make about female prizefighting is the lack of knockouts.

A number of reasons are responsible for knockouts being rare in female boxing but the primary reason has to be the limiting two-minute round. Men’s prizefighting has three minute rounds and that extra minute means a world of difference. It also leads to a lot more knockouts.

Despite the two-minute round restrictions, a few women still possess the skill and innate power to show off their knockout capabilities.

Adelaida “La Cobra” Ruiz is one of those pure knockout punchers and she is this year’s Knockout Puncher of the Year. Two of her riveting knockout wins took place in March and April and head the list as the best knockouts this year. The super flyweight lives in Los Angeles and has quickly gathered an army of followers eager to see her put girls to sleep. This year she’s racked up four consecutive knockout wins.

Ruiz, 30, just recently surfaced after a 10 year absence. She had been an amateur boxing star but retired to care for her children. Then, last year in 2017, she got the bug to fight and returned to the boxing ring to see what she could do. She was pretty good after a decade of rust. But this year she was even better.

The first of Ruiz’s riveting knockouts took place at Commerce Casino on March 17, and she faced Brenda Enriquez in a super flyweight bout. Ruiz has very good boxing skills and quickly dissected Enriquez defense before going on full attack. At 53 seconds of the second round Ruiz connected with a left hook that sent Enriquez nearly out of the boxing ring. If not for a photographer sitting there to catch her fall, Enriquez might have ended up on the floor below.

A month later, Ruiz was matched against Mexico City’s undefeated Reyna Garcia Cotija who challenged her after reading about her accolades on the web. Both met at the Westin Bonaventure Hotel in downtown Los Angeles the site of Deontay Wilder and Tyson Fury’s recent press conference. At the ritzy hotel Ruiz and Cotija exchanged vicious blows for three rounds. Then, at 1:28 of round four Ruiz got the upper hand and connected with a left hook that sent Garcia Cotija down with such force her head hit the canvas hard. It was remarkable that Garcia Cotija actually got up from the blow wobbling. The fight was quickly stopped.

Ruiz fought two more times this year with all ending in knockout wins. So far she has a four-fight knockout streak. Whenever she fights the fans line up to buy tickets in the Los Angeles area. The mother of three has quickly become a boxing attraction.

Ruiz wasn’t the only boxer with a highlight knockout win.

Another sensational knockout that took place happened in Corpus Christi, Texas when lightweights Selina Barrios and Aida Satybaldinova met for the NABF lightweight title on July 7.

In that fight, both were trading blows with abandon when Barrios caught Satybaldinova with a left hook at 1:24 of the fourth round. It was a perfect blow and ended the night for Kazakhstan’s Satybaldinova.

All three of the knockout wins were spectacular and it was hard to determine which knockout was more impressive. We were not able to select the best knockout of 2018 from the three that took place.

Here are all three knockouts for your viewing via YouTube.com. You decide.

Knockout of the Year candidate videos: