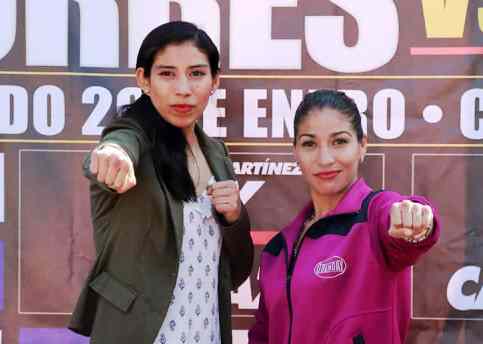 Torres vs Noriega For WBC Silver This Saturday Night

In every sport there are traditional powerhouses whether they are teams, regions or even countries. For female boxing there might not be a bigger one than in Mexico at least when it comes to their respect for the sport.

Last month’s Cecilia Braekhus unanimous win over Aleksandra Lopes broke down barriers on HBO as the first and only female boxing match to headline the network, but in Mexico that is a regular occurrence.  So much so that both major terrestrial networks in the country opened their 2019 season with female headlining the nights.

The Azteca channel did it two weeks ago with former interim WBA light flyweight champion Silvia Torres stopping Venezuela’s Norleidys Graterol in six while former WBC 115-pound champion Zulina Muñoz came back from a year and a half hiatus.  Now Televisa will feature super flyweights for the vacant WBC Silver title in Victoria Torres (9-0, 3KO) versus Jasseth “Plebita” Noriega (24-4-2, 5KO) in a scheduled ten rounder.

The championship bout will take place the Lienzo Charro of Ciudad Guzman, Jalisco, about sixty miles south of Guadalajara.

While the Azteca channel began their season with Silvia Torres, now Televisa will begin theirs with her sister Victoria.  Both of them are the younger sisters of the legendary Ana Maria Torres.  The multi-time champion is best known for her two wars against Jackie Nava but has not fought since 2012.

Silvia Torres captured the interim WBA light flyweight title in late 2017 so if Victoria captures a while title in the near future the Torres sisters would become the first set of three to capture world titles in the history of female boxing.  Silvia lost the title in her first defense to Jessica Nery Platas.

“It would be something historic,” Ana Maria said.  “Victoria, like Silvia, have dedicated themselves to the sport.  She started to train because she saw me box.  She had a very successful amateur career and now she is going after the Silver title.  If she gets to a world title it would be fantastic to be the first three sisters to be world champions.”

Victoria Torres, the local fighter, will be taking a step up in competition in Noriega.  After a successful amateur career in which she competed in the Mexican Nationals, as well as capturing a bronze medal at the 2015 Pan-American Games in Toronto, Canada began her pro career in 2016.  In her nine fight pro career Torres has only fought one opponent with a winning record in Elizabeth Chavez who was 3-2 last summer.  Torres dominated her with an eight round unanimous decision.

The only other notable name in Torres’ resume is Angelica “Magnifica” Vazquez, a relative of the great Israel “Magnifico” Vazquez.  Torres soundly beat her in early 2017 with a four round unanimous decision.

“I am very happy in starting up the year with a title fight,” Torres said.  “I am very proud to be fighting so near to my hometown. I am looking to give a great fight, one that will stay in the memory of the public as well as capturing such an important title as the WBC Silver belt.”

During the final press conference Torres stressed the fact Noriega has the advantage in experience.  “She has more fights than me and I respect what she has done but inside the ring it will be another story.  I will win the fight and the belt.”

Noriega has faced six world champions including Katia Gutierrez, Jessica Nery Platas and Ava Knight.  Noriega defeated Gutierrez, lost to Nery Platas and in her biggest fight to date scored a draw against the feared Knight.  In 2013 she traveled to Japan and lost a disputed split decision against Mari Ando for the WBC full-fledged 105 pound title.  Currently Noriega is the Mexican national super flyweight champion.

She has won seven in row.

At one time Noriega might not have had the opportunity to find herself in the position she is as she was tempted to go down a very different road but she says that boxing is what saved her life.

“I come from a family with a father who is an addict,” she said sharing that she has been tempted by drugs in the past.  “I didn’t want to follow his example so I chose boxing.  God put boxing in my life and it is the best thing that could have happened to me.  I love the sport and it helped get out of the streets.”

Noriega’s advantage in experience is nearly ten years long with her career starting in ’07 in her hometown of Mazatlán, Mexico.  She went undefeated in her first 17 fights with a draw against Cristina Fuentes in 2012 the only blemish.  She suffered her first defeat against the tough Anahi Torres the next year in a bid for the WBC youth 105 pound title in a closely contested ten-rounder in Torres’ hometown of Mexico City.

“We are conscious we have a hard tough fight in front of us,” Noriega stated minutes after finishing one of her last workouts.  “We are going with a positive attitude that we are going to win that title.  I have been a pro for years and always have looked for this kind of opportunity.  I think this opportunity is coming at the right time for me.”

“I am not going to take this opportunity for granted,” she continued.  “This might be my last shot.  I have worked very hard to get here and I must take advantage of it.”

The 28 year-old Noriega reiterated the fact that though Torres is younger, her experience will be the factor that will lead her to come out with her hand raised on Saturday night.  “I have the experience and she has youth.  I think the odds are in her favor.  There are a lot of people, dare I say it, that don’t believe in me.  That motivates me and makes me hungry.  I want to prove they are wrong and I can only do that with the belt in my hands.”

As far as what she is looking to do inside the ring come Saturday night, Noriega was very sure of the strategy she will employ.

“I am going to do a very intelligent fight,” she explained.  “I want to win every round very clearly.  My experience needs to be reflected inside the ring.  I can’t demerit her work, she is a good fighter and that is why she is getting the opportunity to fight for a world title, but I know what I need to do.”

The winner of the fight would be ranked in the top ten of the division by the WBC and would be near the top of the line to challenge current champion Guadalupe Martinez.  Martinez captured the title nearly two years ago with a surprise decision over long-reigning Zulina “Loba” Muñoz.  Since then she has defended the title three times with the last time against fellow Mexican Yulihan Luna in late 2018.