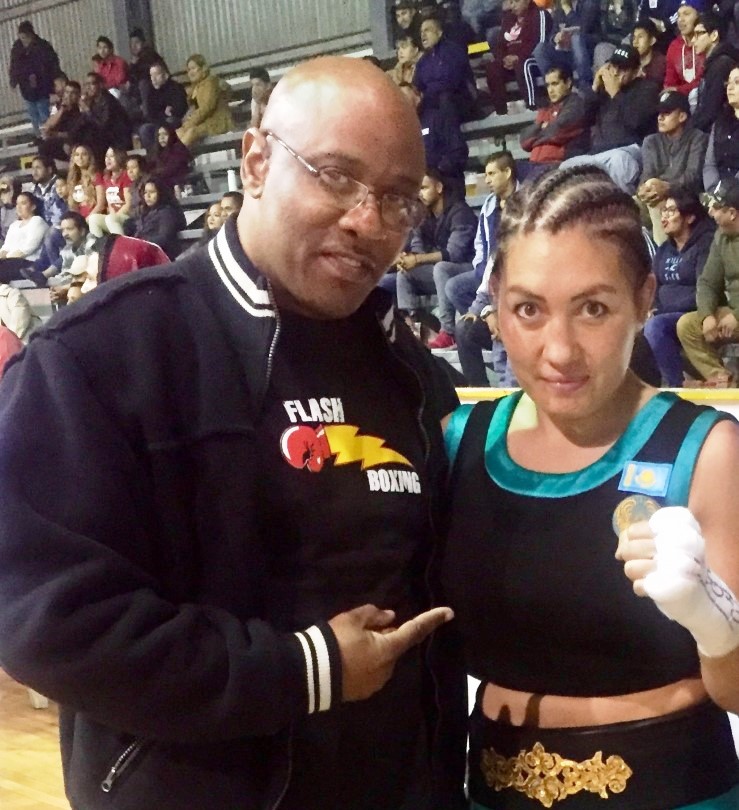 Just as you have your big name female fighters with elite promoters like Mikaela Mayer with Top Rank and Katie Taylor with Matchroom Boxing USA, there are countless fighters who battle it out in the trenches on club level shows throughout the United States.

The dream is to build a following and career to catch the eye of a major promoter who can put you on TV and on the road to bigger paychecks.  In the meantime, fighters hone their craft in front of smaller crowds and sometimes must even travel south across the border south into Mexico to find fights.

Ronald Cruz-Hunt, president of GM3 Promotions, has a big 2019 planned in Mexico with his star fighter lightweight Aida Satybaldinova of Kazakhstan.  The 31 year-old Satybaldinova carries pro ledger of 4-1-1 (1KO) with three out of the five fights contested in Tijuana, Baja California, Mexico.

Originally from the Bay area, Cruz-Hunt has a life-long association with the sport with his father a part of the Cuban amateur team before defecting to the U.S. And now, Cruz-Hunt works for CBS covering boxing among other sports.

Cruz-Hunt cut his teeth working with the late Dan Goosen and the bigger names of the latter’s stable including Andre Ward, Chris Arreola, Josesito Lopez, Paul Williams and Rico Ramos among others.

“When Dan passed away, rest in peace, I decided I was going to do things differently on my own,” Cruz-Hunt said recently in an exclusive interview with the 2-Minute Round, the all-female boxing podcast.  “Instead of marketing to all these gyms and things, let me do it on my own on a grassroots effort and then grow expeditiously.  I still work closely with some of the big promoters and some of the big champions.”

They want to fight

“From champions to contenders they all need to have their place,” he continued.  “I want to give them their place.  In Mexico I am taking female fighters as well as male fighters and to be direct with you, my fighter Aida Satybaldinova is the first female fighter I have ever worked with.  After her it changed my mind completely about working with female fighters.  They are so exciting and so proficient in their training.  They are not lazy, they want to fight.”

After an extensive amateur career back in her home country she went pro in the United States last year with a hotly contested four round draw against Lisa Porter in Los Angeles.  She strung together three wins in a row, two of them against Annette Pabello, before suffering her first defeat, a brutal knockout loss to accomplished Selina Barrios in Texas.   Satybaldinova got back on the winning track in September of last year with a second round stoppage of Viridiana Perez in Tijuana.

“When I was working with Dan Goosen we went to Kazakhstan,” he stated.  “We promoted a fight with Beibut Shumenov.  Aida found me on Instagram because all of her friends knew me from that promotion. She came here with $5,000 in her pocket, her life savings, to become a professional fighter.”

According to Satybaldinova professional female fighting in her country is nearly non-existent.  Christina Hammer, the undefeated former WBC middleweight champion, is also from Kazakhstan but fights out of Germany.

“The fire and her spirit has completely changed my mind about female boxing,” Cruz-Hunt said of his fighter.  “I have been helping her ever since.”

The fight that marked Satybaldinova’s short career so far is the devastating loss against Barrios.  In that competitive fight in Corpus Christi, TX, Satybaldinova was caught with a punch she never saw coming in the fourth round.  The fight was for Barrios’ NABF title as well as Satybaldinova’s WBF strap.

She was knocked out before she hit the canvas.

“Certain fighters will get knocked out and get up and be better,” Cruz-Hunt said of the knockout that took place last July.  “That is what I think about Aida.  You had a bad day. You got hit by punch you didn’t see.  Your style wasn’t good enough for Selina’s style tonight.  We went back to the drawing board.  After her knockout I had Paul Williams talk to her and I had Manny Pacquiao from the Philippines talk to her.”

“She can’t wait to fight Selina again,” Cruz-Hunt stated with excitement. “I am glad Selina’s manager and I, a good man, worked out a rematch clause and they will fight again.  I think that is what the sport needs, people who are not afraid to fight the best.  Selina is an awesome fighter but Aida, I have never seen anybody from the female ranks have that kind of tenacity and she can’t wait to get back in there with her.”

Cruz-Hunt mentions Satybaldinova has been honing her craft in the gym since the loss.

“Now I see an Aida who is poised but just as strong.  She is sparring where she is throwing punches in bunches and not trying to knock you out with only one or two punches.  Now she has an uppercut where she didn’t have one before.  She didn’t know what an uppercut was.  It is a different style, that Eastern European style. Now she is more of a well-rounded boxer.”

Satybaldinova is building back up from the loss with a win already in the books since then and another this past weekend in Tijuana.  She is crowd pleaser with her aggressive come-forward style. It’s a style that is revered in Mexico.

“She is a crowd favorite, people in TJ love Aida,” Cruz-Hunt shared.  “She is line an honorary Mexicana.  It’s like ‘GGG’ but not forced, it is natural and real.  When a woman comes to me and says she has $5,000, her life savings, I’m willing to do what I have to do, it says something.”

With the deep connections Cruz-Hunt has in the sport of boxing in the U.S., why venture into Mexico with his fighters, especially Satybaldinova?

“You have some serious fighters in Mexico who are synonymous with great fighting,” he explained.  “People are always saying if you go into Mexico you are buying the fight, paying to win.  That is so far from the truth.  I took another fighter into Mexico, a Japanese fighter, and she lost a decision.  I wanted to change the conception of Mexico.  American fighters going to Mexico and paying for fights and getting easy wins. That is not the case.”

“The best way to change is to have quality fights in a quality venue,” Cruz-Hunt said.  “As well as putting these fights on a stream so people can watch these fights.  I am working on getting my stream together for each fight that happens from here on out.  I think Mexico is a great hotbed of talent and especially Tijuana.”

To listen to the whole inedited interview please visit BlogTalkRadio.com/2MinRound