The Return of Hammer Time as Christina Hammer Wins by KO
Written by: Phil Woolever 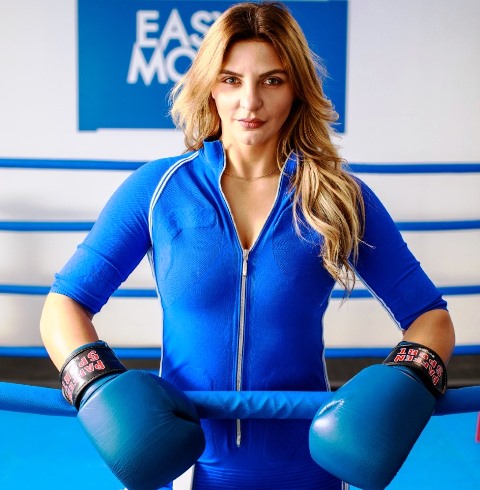 The Return of “Hammer Time” Christina Hammer Wins by KO

Sometimes a boxing match seems so easy people compare it to a sparring session. Christina Hammer’s wipeout of overmatched Elene Sikmashvili at Berlin’s Verti Hall was probably even easier than that.

Hammer, now 24-0 (11), scored a second round TKO without really taking a punch, to make a statement she is once again ready for the mega-fight against Claressa Shields.

“This comeback was a very important fight for me,” Hammer told the press. “I am glad for the chance to fight in front of my German fans before going to the US. I’m anxious for the fight against Shields.”

The bout was Hammer’s return after intestinal problems caused the cancellation of a highly anticipated unification match against Shields last November.

Hammer’s WBO middleweight championship was not at stake. She weighed in around 163 pounds (74 kgs).

While Hammer recuperated, she was deemed “in recess” by the WBC. Her vacated title was picked up by Shields, who now owns three of the four major middleweight belts.

The big question became not who would triumph in their encounter, but when that meeting would actually occur. Sikmashvili, now 8-8 (4), was recruited as an eight round measuring stick of where Hammer stood.

The most remarkable thing about Sikmashvili’s pro record was probably the seven- year gap between her 2006 debut and second appearance in 2013.

The good news was that she entered the contest undefeated, at least in her hometown of Tbilisi. Outside her native Georgia, however, Sikmashvili lost every time she fought and was stopped on six of those seven occasions.

It did not shape up as a long night for Hammer, but nobody claimed the event was supposed to be much more than an exercise for Hammer to re-acclimate to the ring and assess how she felt. Still, the visitor’s losses were all to generally solid fighters, most with championship credentials.

Overall, Sikmashvili was a legitimate opponent for the situation and she showed up to fight.

In the opening round, Hammer displayed solid movement as Sikmashvili pawed in with sloppy follow-up swings. When Hammer landed an early, stinging combination it looked like things could come down simply to how much work she wanted to get in.

Hammer darted in and out with multiple shots to begin the second round. She pounded her foe back into a corner with a left-right sequence, and poured it on as Sikmashili covered up.

Nothing really damaging landed, but the inevitable ending was so obvious it seemed referee Juergen Langos was correct in stepping between them and waving a stoppage. The official time was 35 seconds of round 2.

Hammer was barely warmed up and didn’t look winded at all, but she didn’t actually show anything to worry Shields.

The time and place of that oft-delayed collision remains uncertain.

Shields is currently under suspension until June by the California commission for a hand injury that occurred in her last bout versus Femke Hermans (UD 10) last December, but the minor suspension can be easily lifted upon medical clearance.

Hammer should seriously consider another, more difficult tune-up since it appears time will allow it.

Unfortunately, not only did Hammer’s illness cause issues in the planned, multi-fight series against Shields, it may also have affected Hammer’s best chances in the long run.