World is Watching Claressa Shields vs Christina Hammer
Written by: David A. Avila 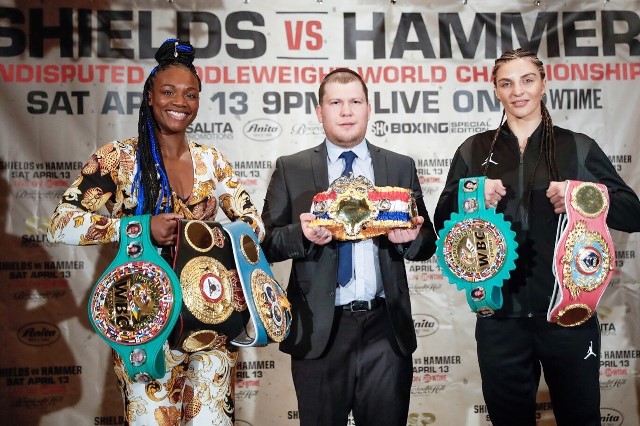 America’s Claressa Shields appeared on the prizefighting scene like a cyclone tearing down everything in her path including the old guard in a mere three years.

Germany’s Christina Hammer entered the professional ranks almost in secret and has been a world champion for nearly a decade.

The cyclone will meet the secret and will women’s boxing ever be the same?

Shields (8-0, 2 KOs) antes up the WBA, IBF and WBC titles against Hammer (24-0, 11 KOs) and the WBO title in their middleweight showdown on Saturday April 13. The battle of undefeated takes place at Boardwalk Hall in Atlantic City. Showtime will televise.

Talent oozes from both fighters.

Shields with her rapid fire combinations and super agility has zig zagged her way through the boxing landscape with ease as if the rest of the world is in slow motion.

Hammer has planted a deliberate course of using her jab like a rapier and daring any to cross the line at their own peril. The right cross is cocked like a crossbow at the ready.

Two distinct styles meet to decide not only the undisputed champion but the fate of female boxing itself. Both are fully aware of the extra burden. It adds to the drama about to unfold.

Together they are crashing the restraints that have kept women’s boxing in the underbrush. Together they are bringing not only notice, but edging female boxing toward possible million dollar paydays.

On Saturday all of this will be like 500 pound weights on their shoulders. Who will win and become the undisputed middleweight world champion?

World is a stage

Female prizefighters around the world are keenly aware and will be watching. All who replied to this publication are considered among the top female boxers pound for pound.

Poland’s Ewa Piatkowska, the WBC super welterweight titlist, will be serving as an analyst for a Polish television crew.

“Hammer is good but I don’t see her near the all-time best,” said Piatkowska. “I think Shields will win on points.”

Down in Argentina, the resident super star Yesica “La Tuti” Bopp is enamored with the showdown.

Japan’s Naoko Fujioka who is considered that country’s greatest female fighter likes the overpowering will of Shields, but says there is still room for improvement.

“She needs to punch through her opponent,” said Tokyo’s Fujioka of Shields. “Sometimes it’s hard to break amateur habits.”

Mexico’s super star Mariana “Barby” Juarez has been fighting since the late 1990s and keenly interested in what she sees in this matchup.

“I like this fight. It will be great,” said Juarez the current WBC bantamweight titlist from Mexico City. “I think both have a lot of experience. I know that Claressa is newer to the professional world but has a lot of fights in the amateur world against fighters from all over the world.”

Layla McCarter, a master boxer from Las Vegas, has been watching keenly the development of this showdown. She hopes that Hammer does not rely on holding tactics as in past performances and instead provides an action-packed fight.

“Styles make fights. If it turns into a clinch fest for example, women’s boxing will look bad. I expect Hammer to use her jab and lateral movement to frustrate Shields who will be trying to get to Hammer’s chin that has proven suspect in the past,” said McCarter who fights at lightweight to super welterweight. “Hammer boxes well but must let her hands go. She also gets hit but it’s lucky for her that Shields doesn’t have a punch like (Anne Sophie) Mathis. The intensity of Shields and the youth will be all Hammer can handle, maybe more.”

The unification match is set for 10 rounds.

“I’m interested to see how it works out. This is a good fight for boxing,” said McCarter.

Another interested in this fight for many reasons is Cecilia Braekhus the only female boxing undisputed world champion and the holder of all the welterweight titles. Many consider her the top female fighter in the world and a possible foe for the winner.

“Women’s boxing has been thriving outside the states but America is the motherland of boxing and the biggest for the boxing business. And for a fight getting this kind of attention and support from a big television network is new and people love it,” said Braekhus who is undefeated and fought in the U.S. twice. “With two completely different styles – American versus East European – this will be quite a treat for boxing fans all around the world.”

And who does she predict as the winner?

One person instrumental in helping bring female boxing to the forefront is Mark Taffet, the former HBO executive who manages Shields. It’s a proud moment for the man who invested in women’s prizefighting.

“It’s what you dream for and wake up for. I’m full of pride for Claressa Shields and Christina Hammer and women’s boxing. Saturday is going to be a great evening and a moment in history,” said Taffet. “It’s a significant increase in money for women’s boxing but there is still a long way to go. If they perform the way they can, it will bring women even closer.”

Shields and Hammer are venturing into uncharted territory for women’s boxing and each is staunchly confident.

“I’m glad Hammer is here and we’re really going to fight. She’s tough, but I’ve beat girls way stronger, faster and taller than her over and over again. I can’t wait to do it again on Saturday,” said Shields.

“I can’t wait to show everyone why I’m 24-0 and been a champion for as long as I’ve been,” said Hammer. “She can say whatever she wants here, because I’m going to show it in the ring. I don’t like to talk too much. I’m here to show my skills in the ring and get all these belts.”

The world is watching.

A battle for the interim IBF featherweight title pits Russia’s Elena Gradinar (9-0, 2 KOs) against Argentina’s Brenda Carabajal (15-4-1) in a 10-round contest on the under card of Shields-Hammer at Atlantic City.

Gradinar, 28, is promoted by Salita Promotions who also promoted Shields and Hammer. Most of her fights have taken place in Estonia. This will be her American debut.

Carabajal fights out of San Salvador, Argentina and has twice battled for world titles. She’s a scrappy survivor. Despite getting dropped in the first two rounds, she got up and survived against the hard-hitting Brazilian Rose Volante. She lost by decision.

It’s an interesting contest between featherweights from different parts of the world.