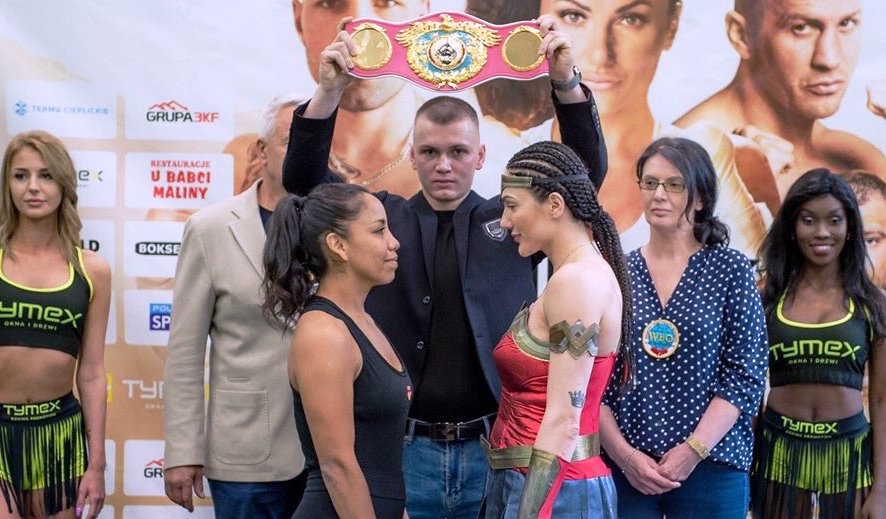 Anyone who may have doubted undefeated Ewa Brodnicka’s self-confidence or sense of humor didn’t have to look farther than the weigh-in prior to her victory over Janeth Perez to understand where the WBO Super-Featherweight titlist is coming from.

Brodnicka is known for social media posts that highlight her physique in minimal attire. She showed up at the scale wearing a Wonder Woman costume, obviously not shy about expressing immodesty.

Whether such provocation is primarily a ploy or not, her marketability keeps gaining momentum though much of the commentary about her has little to do with boxing.

Still, Brodnicka’s image was in the middle of the promotional poster, much larger than any of the male fighters, and it was Brodnicka, now 17-0 (2), who got the large majority of prefight press coverage.

Plenty of that was because of her title but some was due to her opponent Perez, who brought a strong resume to the main event at Jelenia Gora, Poland on Saturday night.

Perez is a two time, former (WBA, IBF) bantamweight belt holder from Jalisco, Mexico who rode a four-bout winning streak into the EU zone but had not been very active since dropping a majority decision to Carolina Rodriguez in December 2014, her second loss to Rodriguez that year.

With almost all but one of Perez’s bouts coming from Mexico it figures she’d had tougher tutorials than the Polish champion, who’s never fought outside her homeland. The fight was basically a pick- ‘em situation going in but Brodnicka proved she is a legitimate force, glamorous tendencies and all.

As the battle began Brodnicka, 129 ¾, used her 5’8 height to keep away as she circled Perez, 127 ¾, who stayed at ring center. Brodnicka had at least a five-inch reach advantage and used her extended left arm effectively to hold the 5’3 Perez back.

Perez followed Brodnicka around from a crouch but positioned her hands too low and never managed to cut the ring off during the first half of the contest. Neither fighter landed anything really substantial but Brodnicka maintained her composure and used the entire ring well while Perez tried to pick up the pace.

Perez was more effective during the second half. She pushed Brodnicka backward with short inside punches in the 7th session and looked more effective working the champion’s body in round 8.

Those two good rounds were not enough.

The 29-year old challenger is five years younger than Brodnicka but the local favorite seemed better conditioned for most of the fight.

Sometimes Perez missed by a wide distance with sweeping lunges from each side, which probably didn’t help her cause with the judges.

Brodnicka never got rattled and stuck to the game plan. She kept her jab busy, landing occasional right leads underneath to build a solid lead that held up down the stretch.

Brodnicka looked elated at the final bell, as if she knew she was in control on the cards, but that changed to a look of concern as the scores were read.

Bence Kovacs had the verdict even at 95-95 while Ingo Barrabas tabbed it 96-94 and Lester Jankowiak 97-94 for Brodnicka. Actually, a decent case could be made for any of those tallies.

“When I found out that one of the judges scored a tie, I was scared and wondered what the result was,” Brodnicka admitted afterward. “I’d give her two, maybe a maximum of three rounds in her favor. A lot of her blows didn’t hit me, and I scored regularly.”

Referee Manuel Oliver Paloma did a good job staying out of the way, breaking up clinches appropriately and only when he needed to. Both women got to fight in the style they preferred.

The most important thing about the scoring was that although much of the action was close and Perez, now 24-5-2 (6), was more aggressive, it didn’t appear she had done near enough to capture the title.

“My intention was, precisely, not to get in a total war with her and keep her at a distance, and that worked,” Brodnicka, now 17-0 (2), told Mateusz Borek of Polstat Sport. “I didn’t want to exchange punches for the entire fight, maybe just the last two rounds. My trainer kept me firmly in check and I stayed on my toes.”

Each boxer was basically unmarked after the fight, but it was a fast paced, entertaining affair and there didn’t appear to be any hard feelings. As she waved to the cheering hometown crowd Brodnicka smiled more broadly, looking more and more relaxed, like maybe she was ready for some selfies.

It was kind of how she looked at the weigh-in.