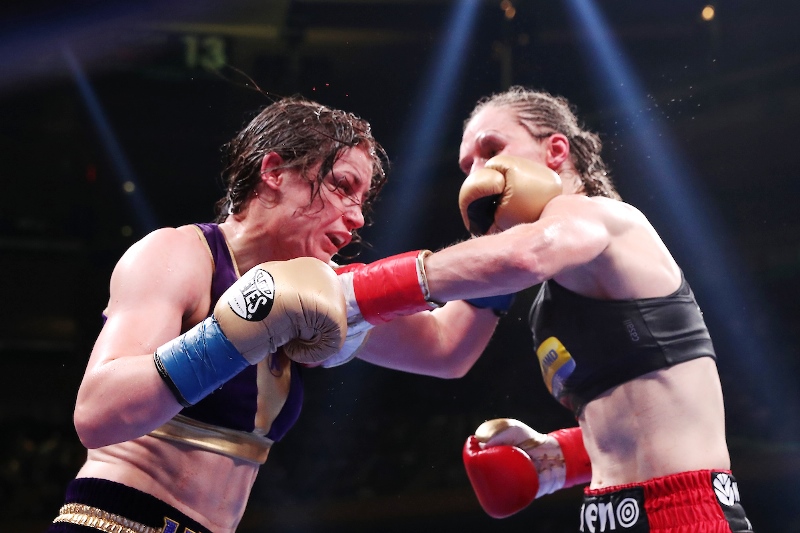 Katie Taylor emerged the winner after 10 brutal rounds against punching machine Delfine Persoon to win by majority decision. It gives the Irish fighter all four major world titles but does it give her the title of undisputed world champion?

Though many observers felt Persoon had won the fight, one thing not disputed was that the two female prizefighters walloped each other for 10 rounds in one of the best fights of the year.

Let’s do it again.

If you were looking for pretty it wasn’t in this fight. Though the former Olympic gold medalist opened up the fight by moving and hitting, once Persoon got the range and maneuvered in close with her crazy mauling style, everything changed.

Those last three rounds were brutal and mesmerizing.

Fans who love female boxing have seen this before. But for many fans not familiar with female boxing, watching on DAZN or in Madison Square Garden was their first time encountering the power of female prizefighting. Both champions bludgeoned each other looking for an advantage and neither would give in.

You have to love their grit.

Watching Persoon stalk Taylor with a crazed look on her face while absorbing the Irish fighter’s combinations was captivating. And Taylor’s refusing to run and hide while taking big blows was proof of her fighting spirit.

Now Taylor has all four major titles and can go any direction she desires. Should she fight New York’s Amanda Serrano? Should she rematch with super lightweight world titlist Jessica McCaskill? Or should she immediately step back in the boxing ring with Persoon who departed Madison Square Garden while wagging her finger negatively at the judge’s decision.

Taylor holds all the belts now and with her promoter Matchroom Boxing can go in any of the three directions. She now joins Claressa Shields and Cecilia Braekhus as champions holding all the belts. But is she undisputed?

After the fight Taylor demanded a rematch be made. Good on Katie.

Speaking of Serrano, the Puerto Rican prizefighter who has won world titles in a record seven weight divisions was named “Athlete of the Year” by the Puerto Rican Day Parade Committee. She will be participating in the festivities on Sunday June 9 in New York City.

This is the 62nd annual parade that is held on Fifth Avenue in Manhattan with an estimated 3 million expected to watch the popular event.

“The Puerto Rican Day Parade in New York City is the biggest day of the year for me to celebrate my homeland. For many years, my family and I have attended and to be recognized in this manner for my accomplishments means a great deal to me,” said Serrano.

Linardatou, 31, is the first female Greek world champion and makes her first defense of the world title since defeating Kandi Wyatt last March. She’s a hard charging fighter and gave Delfine Persoon a difficult fight when they met three years ago.

“I wasn’t ready for Delfine when we fought before,” said Linardatou when she spoke to thePrizefighters.com last year following her win over Alycia Baumgardner a year ago in Louisville, Ky. Is she ready for Persoon now or current WBA, WBC titlist Jessica McCaskill?

This is an important test for Linardatou.

On Saturday Jun 15, Mikaela Mayer (10-0) defends the NABF super featherweight title against Argentina’s Lizbeth Crespo (13-4) at the MGM Grand in Las Vegas. The Top Rank card will be televised by ESPN.

This is Mayer’s third defense of the NABF title.

Yanina Lascano (4-1) beat Maria Santana (1-3) by unanimous decision after four rounds on Friday May 31. The lightweight fight was held in Concordia.

On Friday June 7, bantamweights Augustina Rojas (0-0) and Catalina Alvarez(0-2) meet in a four round fight at Santa Fe, Buenos Aires.

On Saturday June 8, featherweights Djemilla Gontaruk (14-5-2) and Karina Kopinska (12-29-4) meet in a six round affair in Herstal.

On Saturday June 8, super lightweights Jessica Camara (5-1) and Dalila Velazquez (5-1) meet in a six round clash at Montreal. Also, welterweights Marie-Pier Houle (0-0) and Maria Duran (1-2) meet in a four round bout.

On Saturday June 8, flyweights Laetitia Arzalier (13-1) and Anne Sophie Da Costa (28-5) meet in a 10 round contest for the WBF title at Herault.

On Friday June 7, super lightweights Christina Linardatou (11-1) and Deanha Hobbs (8-0) meet in a 10 round clash for the WBO world title at Athens.

On Saturday June 8, flyweights Ewelina Pekalska (3-0) and Nina Radovanovic (14-2) meet in a 10 round title fight at Buk. Also, bantamweights Dorota Norek (3-0) and Marina Dekic (2-6) meet in a four round match.

Saida Bukvic (3-0) won by unanimous decision after six rounds versus Snezana Siljkovic (1-4-1) on Friday May 31. The super flyweight match was held in Belgrade.

Matshidiso Mokebisi (10-8-1) won by knockout in the fifth round over Sindiswa Ncube (3-4) on Saturday June 1. The super featherweight match took place in Johannesburg.

On Saturday June 8, super bantamweights Naiara Olmedo (0-0) and Enerolisa De Leon (2-2-2) meet in a four round bout at Bilbao.

Aniya Seki (35-4-3) was the winner by unanimous decision after eight rounds versus Ivanka Ivanova (1-11-2) on Saturday June 1. The bantamweight fight took place in Berne.

Chika Mizutani (15-7) knocked out Jasita Yotawan (0-3) in the first round on Friday May 31. The lightweight fight took place at Chachoengsao.

On Friday June 7, lightweights Nicole Reinhart (0-0) and Khadija Sanders (0-4) meet in a four round contest at Detroit, Michigan.