Adelaida Ruiz and Lorraine Villalobos Both Win in So Cal
Written by: Felipe Leon 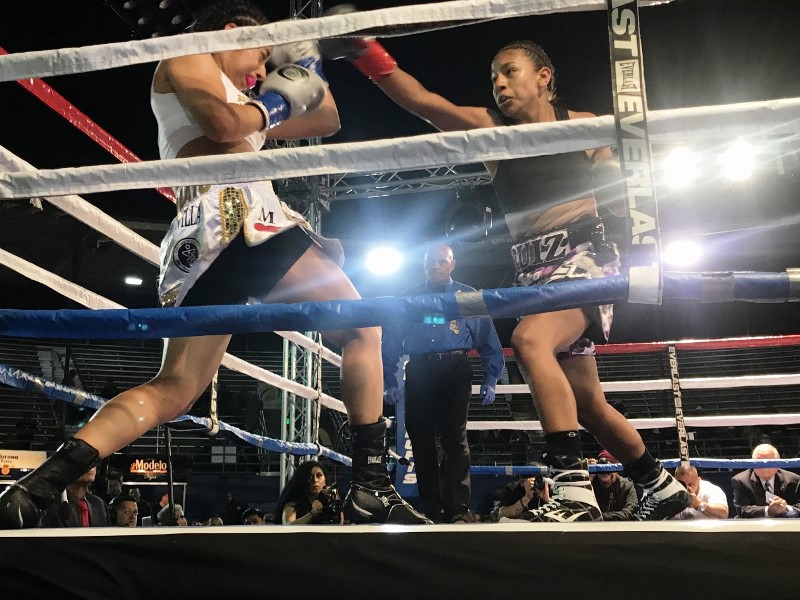 Adelaida Ruiz Comes Back with Win; Villalobos Wins Too

Red Boxing International presented the event at the Pico Rivera Sports Arena with not only fights, but also musical performances were sprinkled in between some of the bouts.

The 30-year-old Ruiz was in her first fight of the year after fighting four times in 2018.  Undefeated as a professional, she was riding a four-fight knockout streak by the tough Tijuana Aguayo, who despite only in her third fight and first in the United States, was able to survive the six rounds.

Aguayo won the right to fight the much more experienced Ruiz with her recent win, a four round split decision nod over the then 11-4 Tomomi Takano in April.

As usual in female fights, no round of study was needed with the action getting hot and heavy seconds after the opening bell.  The southpaw Aguayo was game willing to stand in the pocket with the heavy-handed Ruiz and exchange bombs in the center of the ring.

The taller and rangier Ruiz, who showed no signs of ring rust after a little more than a seven months out of the ring, was the faster and stronger of the two but Aguayo had success countering with straight punches in between Ruiz’s two-fisted attack.  Starting in the second Ruiz fell into a pattern by pawing with her jab to gauge the distance and then unleashing of barrage of punches.  Many of them landed with Aguayo standing her ground and firing back but not as often.

“We had a hard camp, I’ve been doing new things,” Ruiz said minutes after her win in an exclusive interview with ThePrizefighters.com.  “Started with a new coach which is my dad, started with a strength and conditioning coach which I have never done before.  I had a good nutritionist for this camp so I felt really, really strong.  I was more mentally into the fight versus going out there and just throwing.”

Ruiz, mother of three, began to turn up the heat and adding more punches to the combos.  Aguayo’s best punch didn’t come with her fist but with an unintentional head butt as she leaned in to punch that caused a good-sized mouse under Ruiz’s right eye.

Although it didn’t seem possible Ruiz found yet another gear and opened up the fifth with what seemed a 15-punch attack with Aguayo’s back to the wall.  Ruiz came on strong looking to force the stoppage but like a cat Aguayo not only showed good defense when caught in a corner, but also was actually able to snap Ruiz’s head back with sporadic left hands.

“After the fourth round I was really trying to get the knockout,” Ruiz said of the second half of the fight.  “She was a strong opponent.”

By the sixth round the mouse under Ruiz grew to a size of small rat but it didn’t deter the local fighter to look for the knockout to keep the streak alive.  Through out the two-minute round Ruiz attacked, planting her feet in front of Aguayo and throwing big power punches.  By this time Aguayo, who was in her first scheduled six rounder, wasn’t too interested in exchanging as fatigue began to set in and for the first time in the fight looked to survive until the final bell.

In the other featured female bout of the evening, local favorite Lorraine Villalobos (3-2, 1KO) got back in the winning column scoring the first knockout win of her career with a fourth round stoppage of Danielle Saldanha (2-3, 1KO) of Fort Collins, Colorado.

The end came at the one-minute mark of the last round in a fight in the strawweight division.

Villalobos of Whittier, CA, was coming off two straight losses but the last one was current WBC interim atom weight champion Louisa “Bang Bang Lulu” Hawton last December.  According to Villalobos she took the fight on a ten day notice.  Hawton stopped her in five rounds.

Saldanha was also on a two-loss streak.

Saldanha, the taller of the two, looked to establish her jab early on scoring crisp ones in the first half of the round.  Once Villalobos got warmed up she made it her business to score a lead right hand and she almost did it at will despite staying on the outside.  Soon Villalobos began to score two punch combos as her punches were faster than her opponent.

Villalobos kept pushing in the next couple of rounds as she turned up the intensity of her attack while taking away Saldanha’s advantage in height in reach.

They exchanged big punches in the third going toe-to-toe near the end of the round with Villalobos’ punches getting there harder.

With Saldanha clearly fatigued and motivated by her hometown crowd Villalobos went for the kill scoring a devastating right hand that sent Saldanha down hard.  The Fort Collins fighter beat the count, but the third man in the ring, referee Daniel Sandoval called off the action once he got a closer look at her.