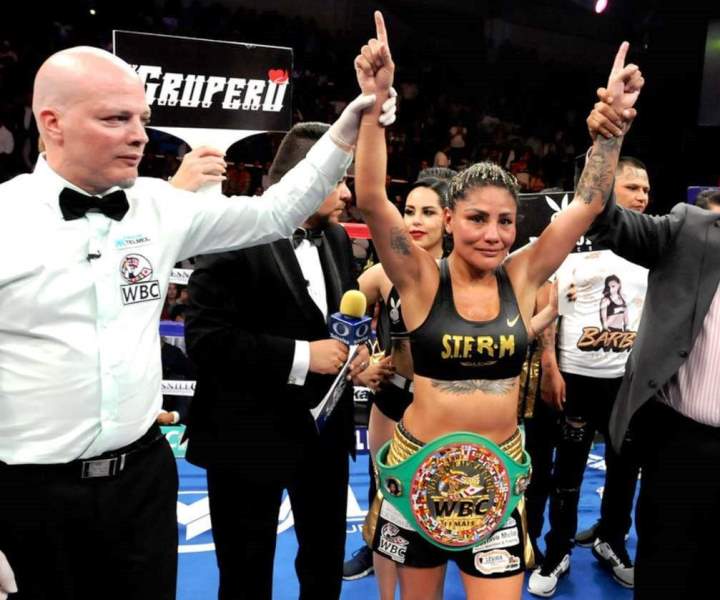 One of the best known fighters in the world, Mariana “Barby” Juarez, showed us why she still also belongs among the top pound for pound lists with a strong performance against one of Mexico’s new wave of fighters.

The older guard showed the youngsters once again just how it’s done.

Behind an accurate jab, whether from an orthodox stance or southpaw side, Juarez (53-9-4, 18 KOs) snapped challenger Diana “La Bonita” Fernandez’s (20-3) head back throughout their 10 round WBC bantamweight world title fight in Juarez.

It was a master’s class in poise, distance and accuracy.

Juarez has been fighting since 1998 in both the USA and Mexico. She has learned her craft throughout those years and has amassed more than 66 bouts, not including the fights she had illegally when female boxing was banned in Mexico.

She started as a woman sought after to be a fashion model but yearned to trade blows. When she was based in Southern California she could often be seen sparring with anybody who wanted it, regardless of weight.

The Mexico City brunette won her first title in 2004 when none of the major sanctioning groups like the WBC, WBA, IBF or WBO gave titles to women. Juarez won the WIBA super flyweight title in Korea.

Only a few prizefighters from that era are still in the profession. Few fighters, male or female, have more than 50 prize fights like Juarez.

Part of the reason for the discrepancy has to do with earnings. Men make much more and need not fight as often. A female fights to make money so that’s why Mexico’s most famous female fighter continues to fight often. Juarez remains one of the highest paid female prizefighters in the world.

Imagine the punishment she has absorbed over the decades both in actual prize fights and in the many wars engaged in sparring. That’s plenty of hits.

Against the very aggressive 24-year-old Fernandez the future Hall of Fame fighter Juarez displayed the importance of accuracy. Throughout their ferocious 10-round battle Juarez slipped and countered or busted up a Fernandez attack with a simple stiff jab. It was the art of prizefighting at its best.

Juarez has always been worth watching. Fighters like Juarez, Marcela Acuna, Jackie Nava, Layla McCarter, Alicia Ashley, Naoko Fujioka, Melissa Hernandez and a few others still remain from that era when female fighting was illegal. They all have accumulated priceless knowledge inside the boxing ring that will be gone forever when they retire.

The “older guard” remains the greatest generation of female boxing. Take advantage and watch them perform.

Back in the late 1950s a new style of film hit the motion picture industry called “New Wave” cinema. It was headed by filmmakers like Francois Truffaut and Jean-Luc Goddard who introduced the world to a new style of non-traditional motion pictures that featured realism, long takes and social commentary.

Today, in boxing, we have a new wave of prizefighters who have been trained extensively in the amateur boxing world. They arrive with plenty of boxing experience and training.

France has re-emerged with this new wave of female prizefighters and are rapidly taking to the professional boxing rings.

America’s new wave took to the boxing ring last week with three of its top showcasing their skills in the West Coast.

First, we saw Seniesa “Super Bad” Estrada bludgeon Philippine’s Gretchen Abaniel to submission with a body attack that had people squeamish from its brutality in Hollywood. Estrada, 26, arrived with a lengthy amateur career including international experience but who also has a mean streak. She grabbed her fifth straight knockout win.

Speaking of mean streaks, Mikaela Mayer showed her’s with a savage attack after being intentionally butted by Argentina’s Lizbeth Crespo last Saturday in Las Vegas. After the butt Mayer unloaded some murderous uppercuts and combinations that forced Crespo to “duck and cover” like one of those 1950s atomic bomb advertisements. Mayer is a fiery super featherweight itching to tangle with any of the world champions. Nobody wants to play with her. I wonder why?

The other who fought is Adelaida “La Cobra” Ruiz who defeated Mexico’s Myrka Aguayo by unanimous decision with a withering attack in Southern California last Saturday. Ruiz was seeking her fifth straight knockout win but was facing a strong fighter in Aguayo. She settled for a unanimous decision and won every round.

Ruiz, Mayer and Estrada are part of America’s new wave of prizefighter reared through the amateur boxing world and now adapting to the pro circuit. It would not be a surprise to see all three become world champions very soon.

Iara Altamirano (6-0-1) was the winner by unanimous decision after six rounds against Antonella Molina (0-6) on Saturday June 15. The bantamweight fight was held at Rafael Calzada.

Rachel Loder (4-0) knocked out Rebekah Radley (0-1) in round two on Saturday June 15. The lightweight bout took place at Tweed Heads.

On Saturday June 22, featherweights Jelena Mrdjenovich (38-10-2) and Italy’s Vissia Trovato (12-2) meet in a 10 round bout for the WBA and WBC world titles at Edmonton. Mrdjenovich, 36, turns 37 next week and will be defending both titles for the fourth time. Also, bantamweights Mikenna Tansley (0-0) and Perla Rojas (1-5) meet in a four round bout.

Li Ping Shi (5-2) was the winner by unanimous decision after 10 rounds versus Yuko Henzan (8-8-4) on Tuesday June 11. The WBC Asian super flyweight title fight took place at Xi An.

On Sunday June 23, super middleweights Ema Kozin (16-0-1) and Edita Karabeg (2-10) meet in an eight round bout at Kastel Kambelovac.

On Friday June 21, super featherweights Jelena Jelic (0-0) and Anja Jankovic (0-6) meet in a four round bout at Koge.

On Saturday June 22, super bantamweights Dina Thorslund (13-0) and Australia’s April Adams (11-1-1) meet in a 10 round clash for the WBO world title at Horsens. Thorslund, 25, is making her second defense of the title. Also, lightweights Joanna Ekedahl (8-0) and Jelena Janicijevic (2-1) meet in a six round match.

Aurelie Froment (2-0-1) knocked out Anja Jankovic (0-6) in the third round on Friday June 14. The lightweight fight took place at Servian.

On Saturday June 22, welterweights Jessica Schadko (3-0) and Valeria Kovacs (2-2) meet in a four round match at Baden-Wurttemberg.

On Saturday June 22, super bantamweights Yazmin Rivas (39-10-1) and Venezuela’s Ana Lozano (15-8-1) meet in a 10 round contest for the WBA world title at Ahualulco del Mercado, Jalisco. This is Rivas second defense of the WBA title. She is also a former bantamweight world champion.

Floryvic Montero (5-7) knocked out Joan Ambalong (6-13-1) in the first round on Saturday June 15. The Philippine light flyweight title fight took place at Manila. Also, Dipika Tiwari (1-1-3) and Rica Aquino (0-0-1) fought to a draw after a four light flyweight contest.

Seniesa Estrada (17-0) won by knockout at the end of the fourth round versus Philippines Gretchen Abaniel (18-11) on Thursday June 13. The WBC Silver light flyweight title fight took place at Hollywood, Calif.

On Thursday June 20, Franchon Crews (4-1) and Kayla Williams (0-2) meet in an 8 round non-title fight at Atlantic City, New Jersey. Crews fights out of Baltimore, Maryland is the current WBC super middleweight world titlist. She recently signed with Golden Boy Promotions.