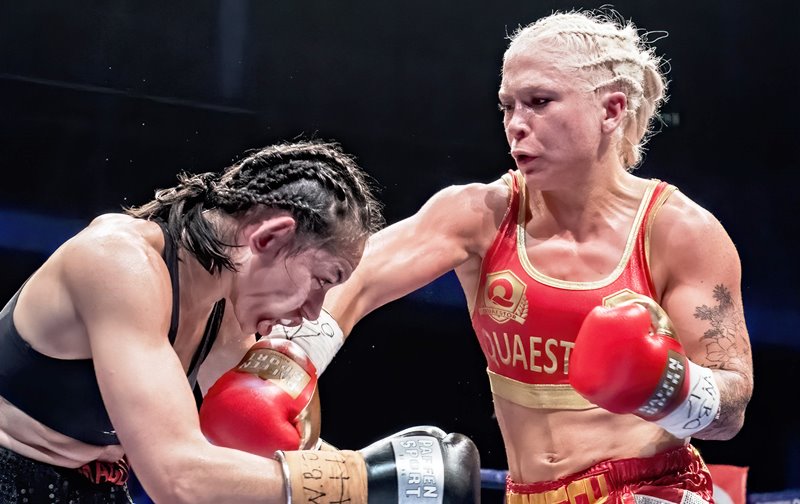 After all the heavy leather Dina Thorslund landed against her Australian challenger April Adams, it was those punches the WBO Super-Bantamweight Champion didn’t throw that seemed the most significant.

When a huge series of shots wobbled Adams with a few moments to go in the final frame, it suddenly looked like Thorslund might actually get the knockout she had repeatedly talked about before the contest.

Instead of pouncing for a dramatic finish, Thorslund, 121 ¾, ceased her attack and backed off. A slight smile seemed to say that though Adams, 121, was outgunned all the way, Thorslund felt the visitor had earned the right to finish the battle on her feet on Saturday.

It was a classy, proper ending to what had been a spirited, if one-sided affair.

“I feel like I was in control for the whole time,” said Thorslund, now 14-0 (6), who looked ready for another ten rounds. “I feel good and I’m very happy to have defended my belt in such a good fight.”

Except for a few brief intervals, it was a skillful, fast-paced punch out from beginning to end. Thorslund charged from the opening bell and quickly connected with both hands. Adams, now 11-2-1 (4), landed counters but Thorslund picked off or blocked most punches and started to shake Adams up at the end of round four.

The 5’4 Thorslund controlled the distance better but Adams didn’t concede anything and stayed unruffled while Thorslund forced her taller opponent backward. There was solid two-way action in the 5th, as Thorslund staggered Adams for the first time with a big left hook.

They took a bit of a breather in round six, and the 7th session was fairly even as the pace picked up again. Despite frequent infighting there were few clinches during the entire bout.

Referee Manuel Oliver Palomo properly stayed out of the way and didn’t need to get involved much beyond replacing Adams’ mouthpiece when it was dislodged twice, maybe by punches, maybe not.

In the final round, Thorslund got on her toes more in cruise control mode and mainly fired left uppercuts, almost as if she was protecting her right hand. Whatever the case, she was still strong enough to blast Adams into deep trouble.

By the end of the fight Adams’ corner understood the obvious,   reminding her not to worry about the result and be glad for the learning experience. Good advice.

All judges (Agapito Gomez, Leszek Jankowiak, Frank Maass) saw it at 100-90. ThePrizefighters.com wouldn’t disagree with a shutout but scored 100-92, giving Adams even credit for a couple very close frames.

“There wasn’t one second where I felt in doubt,” concluded Thorslund. “It was a hard physical battle. April is a tough girl. She came here to win.”

Thorslund’s hometown of Struer is around 100 miles away from tonight’s location at the Forum in Horsens. That translated to a number of empty seats, but the crowd still made a decent amount of noise for Thorslund during her second successful title defense.

Meanwhile, if her promoters get their way, Thorslund will be in higher profile situations soon. After the fight, Nisse Sauerland indicated a move up to featherweight was imminent, with very formidable Heather Hardy as a target.

“I want to be the best and that involves moving up in weight and collecting more titles,” added Thorslund. “I’m ready to face anyone, and that includes Hardy.”

If that matchup does occur soon, the more experienced Hardy would have to be considered the favorite wherever the match took place.

Still, if 25 year old Thorslund keeps improving and continues to rumble like she has recently, she’ll be a very tough assignment for anybody under 130 pounds.

If Thorslund doesn’t hold anything back, every future foe definitely better watch out.