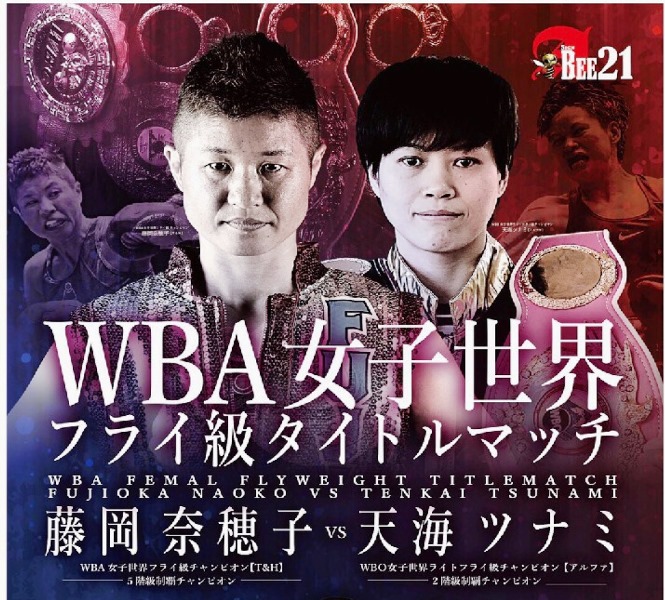 One of the greatest national derby matches in the history of Japanese female boxing has been set for July 12th at the Korakuen Hall in Tokyo.

Naoko Fujioka (18-2, with 7KOs) owner of five weight division world championship belts and Tsunami Tenkai (26-12, 15KOs) with two of her own will battle for the WBA flyweight crown which Fujioka holds currently.

It was a kind of surprising announcement.

Team Fujioka was planning a mandatory defense fight but no contender would take the shot. Then they offered Tenkai who was going to defend her WBO light flyweight title in Mexico at the end of June. Tenkai took the chance with all effort to cancel her tour to Mexicali. “I have been thinking I would fight Fujioka someday. Now I got it. I cannot wait for the day.” Tenkai said in the press conference two weeks ago.

Fujioka vs Tenkai can be the best of them in terms of quality.

Forty-three year old Fujioka has 10 years of a professional career. And the nine years younger Tenkai has fought as a pro for 14 years. Both legends are still in their prime.

This pair could have had chances to fight each other before, but now it’s finally happening.

Tenkai is, in a sense, a true pioneer of female professional boxing in this country. She started fighting in 2005 when the JBC had not yet admitted female boxing. So, she was already experienced when she was licensed by JBC in 2008 and won the WBA super flyweight title by defeating Xiyan Zhang of China by unanimous decision in February 2009. Fujioka with an amateur pedigree turned professional seven months later.

Fujioka won the WBC minimumweight championship with a TKO victory over Anabel Ortiz of Mexico in her sixth professional fight in May 2011. Tenkai failed in her 5th title defense by controversial unanimous decision to Naoko Yamaguchi in 2012. Then, Fujioka took over the WBA 115 lbs. title from Yamaguchi in 2013.

In years after that, Fujioka was adding three more world championships to become the first Japanese fighter with world titles in five weight divisions. No Japanese fighter whether man or woman had accomplished the feat.

Tenkai was struggling on the road to obtain a world title again. While it took six years and many dark marks on her record to accomplish it, she proved that she was still in her heyday when she stopped prospect Chaoz Minowa in the eighth round for the vacant WBO light flyweight title. It could possibly be her best showing in her 13-year career as she used superb skill and speed to overwhelm Minowa who had obtained countless amateur national titles. It was a complete domination.

“I thank Tsunami for accepting our offer and saving the event as scheduled. She is not only simply strong, but she has great skill and strategy. I am looking forward to dealing with her tactics”, Fujioka said.

A lot pressure will be on Fujioka’s shoulder to take such a challenger. But such big pressure could pull out the best performance from the queen when looking back on her history. She is known as the biggest name of all time in Japanese female boxing not only because she has five world champion belts, it is because she impressed people with great performances especially against compatriot talents; Yamaguchi, Tomoko Kawanishi, and Shindo. So, she is willing to do it again and not leave any doubt of being the best in the country before heading to her final dream: fighting in America.

“We will make the fight great, more than people’s expectation. And I will win”, Fujioka puts it into words.

“I will win and become a three division champion…no, I don’t care about that. I am excited only to fight Fujioka in the ring,” Tenkai said.

The battle of female titans is set. It’s the power and boldness of Fujioka versus the speed and precision of Tenkai. This is a true 50-50- fight for dignity.

Catalina Alvarez (1-3) was the winner by split decision after four rounds versus Roxana Bermudez (2-1-1) on Saturday June 29. The super flyweight bout was held in Perez.

Nazarena Moreno (8-0) knocked out Valeria Almiron (2-19) in first round on Friday June 28. The featherweight bout took place at Recreo.

Desley Robinson (1-0) knocked out Leah Plumpton (0-1) in the third round on Friday June 28. The super welterweight match was held at Acacia Ridge, Queensland.

Marie Eve Dicaire (16-0) beat Maria Lindberg (17-5-2) by unanimous decision after 10 rounds on Friday June 28. The IBF super welterweight fight took place at Montreal. Dicaire, 32, was making her second defense of the title. Also, Marie-Pier Houle (2-0) knocked out Veronica Diaz (0-3) in the fourth of a welterweight match.

Eva Voraberger (25-6) was the winner by unanimous decision after six rounds against Evgeniya Zablotskaya (8-18) on Saturday June 29. The bantamweight fight was held at Znojmo.

On Thursday July 4, flyweights Alicia Holzken (4-0) and Xenia Jorneac (10-3) meet in a 10 round title fight at Aabenraa.

On Friday July 5, middleweights Augustina Markelionyte (0-0) and Gintare Steiblyte (0-0) meet in a four round bout at Parnu.

Ribaraoi Tekiera (1-0) won by technical knockout in the fourth round over Maureen Chand (0-1) on Saturday June 29. The super lightweight bout took place at Nadi.

Anissa Benyoub (3-2) won by unanimous decision after eight rounds on Friday June 28 versus Victoire Piteau (2-1). The super lightweight fight was held at Puiseaux-Pontoise.

On Saturday July 6, flyweights Laetizia Arzalier (14-1) and Cintia Cinjel (6-1) meet in a six round clash at Beziers.

On Saturday July 6, featherweights Bilgenur Aras (2-0) and Nino Gviniashvili (1-4-1) meet in a four round fight at Hessen.

Mizuki Chimoto (2-0) defeated Chie Higano (9-8-1) by technical decision in the sixth round on Tuesday June 25. The Japanese minimum weight title fight was held at Tokyo.

Yesenia Gomez (16-5-3) was the winner by unanimous decision after 10 rounds versus Ana Victoria Polo (8-5) on Saturday June 29. The WBC light flyweight world title fight took place at Cancun. It was her second defense of the title.

On Saturday July 6, featherweights Laura Grzyb (1-0) and Vanessa Caballero (1-5-3) meet in a four round fight at Rzeszow.

On Saturday July 6, super lightweights Sam Smith (9-3) and Vaida Masiokaite (1-5-1) meet in a four round bout at London.

Shelly Vincent (25-2) defeated Simone Da Silva (16-13) by unanimous decision after eight rounds on Saturday June 29. The featherweight fight was held in Providence, Rhode Island. She announced her retirement after the fight.