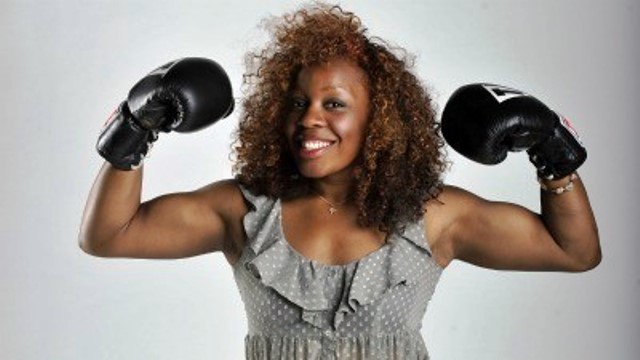 Catching Up with Franchon Crews-Dezurn

Despite female boxing really coming into its own in the last half-decade, it has taken the bigger promoters of the sport time to catch up.  Lou DiBella of DiBella Entertainment has been one that has believed in female fighting for quite some time, keeping a number of female fighters in his stable at all times, but the bigger names, Top Rank and Golden Boy Promotions, have been slower getting there.

“I don’t want to mention any names but I had two (promoters) that were interested,” Crews-Dezurn said in an exclusive interview with the 2-Minute Round podcast regarding other companies that were chasing her for her signature.  “What I liked about Golden Boy is that they followed up on their word. When they said they were ready, they were ready.  I just like people that act on what they say they are going to do.  You say you are going to do something, do it, because that is the type of person I am.  I was pursued by a few but they weren’t right for me at the time.”

Crews-Dezurn (5-1, 2KO) of Baltimore, Maryland, is only a few weeks on board with Golden Boy Promotions but already has fought on one of their fight cards.  She scored a fifth-round technical knockout against late-sub Kayla Williams last month.

“Every time I step into the ring, I look to get the job done,” she explained.  “It was very nice, they were very hospitable to me, I felt like a world champion.  Fighting in Atlantic City, everything was nice.  The energy was great, I was happy some of my supporters from Baltimore came up and I made some new fans in Atlantic City so that was an amazing feeling also.”

As the current WBC super-middleweight champion, a title she won last September via a majority decision over Maricela Cornejo, the 32-year-old understands it is not easy to find opponents for her especially in the sparsely populated 168-pound division.

“I wasn’t like that because I can fight.  I have always been at an elite level,” she responded to the question of why she is willing to fight anybody.  “I know I can fight and I believe in myself and the people around me.  I am blessed now because they believe in me wholeheartedly.  At the end of the day liken myself to a throwback fighter, like my husband teaches me a lot of stuff, we watch a lot of old-school boxing.  The fighters back then, they fought.  Win, lose or draw, they fought.

“The greatest had a loss on their record.  Bernard Hopkins he was inducted into the hall of fame and he lost his first fight,” she continued.  “Oscar De La Hoya lost.  At the end of the day you have to learn.  If you aren’t getting fights you aren’t going to learn, win, lose or draw.  Losses will prepare you and teach you lessons for your next fight.  Even if you win you can look at things you can improve on. So, I just like to fight and I am here for a long time and a good time.”

One of the perks to signing with such a high-profile promoter is the fact you have mentors that have been there and done that.  One of them is former multi-divisional champion Bernard Hopkins who is in charge of the company’s east coast promotions.

“Bernard (Hopkins) told me a lot of things,” she said of her recent encounter with the living legend.  “I respect him as a fighter and I am sure if and when Oscar is ringside at my fight, I want to pick his brain too.  I am not in it for just fame and things.  First and foremost, I am in it for legacy and of course I want to provide for my family.  I do want to improve and now I have a platform.  In my last fight I got to see Eric Gomez, the president of Golden Boy, and he was pleased with my performance.  I believe they have the tools to move me in the right direction, to groom me into a better fighter.  When it is time for me to do what I need to do, I want to be the best at it.”

Crews-Dezurn is aware her new promotional company is not best known for their women’s division as well as being criticized for their work with African-American fighters but she is sure she can help change that.  “Golden Boy gets a lot of flack for them not supporting black fighters and for me I have two strikes against me, I’m black and I’m a woman, so for them to take me on being the third woman currently signed to Golden Boy it shows that they are making strides to support talent.”

Although Crews-Dezurn really jumped into the boxing consciousness since her pro debut against Claressa Shields back in late 2016, she has been a big part of the female boxing scene for quite a while.

“I got the girls together and we fought for it,’ she explained.  “The women are getting allocated now.  I have been doing my part and I am transitioning to the pros at the right time to continue to push the narrative forward for female boxing.”

One name that is always mentioned with hers is of the current undefeated, unified and undisputed middleweight champion Claressa Shields.  Their history obviously goes back to their amateur dates but as mentioned before they debuted against each other in the pro ranks on the undercard of the first Andre Ward vs Sergey Kovalev fight in a four rounder than many considered the best fight of the night.

“Me and Claressa, I always say in all my interviews that our legacies are intertwined,” she said of Shields.  “Before Claressa came on the scene, I was the big dog at middleweight consecutively from ’05 to 2011.  I was the person to beat.  We have a rich, competitive history.  I believe we bring the best out of each other.  I know she is going to bring; I know she is going to bring it.  Now we are in the business of punching for pay, we have helped raise the level of female boxing.”

“We are both establishing ourselves,” she continued.  “She is the undisputed champion; I have platform and I am looking to unify so possibly be an undisputed champion as well.  It is only right, for our fans, for our legacies and for profit also.  A lot of females say the money has to be right, this, that and a third, but for that fight, the money has to be right.  We should get what we deserve because that is going to be a high-quality fight.”

To listen to the full unedited interview, please visit BlogTalkRadio.com/2MinRound