Women’s International Boxing Hall of Fame Class of 2016 and More News
Written by: David A. Avila 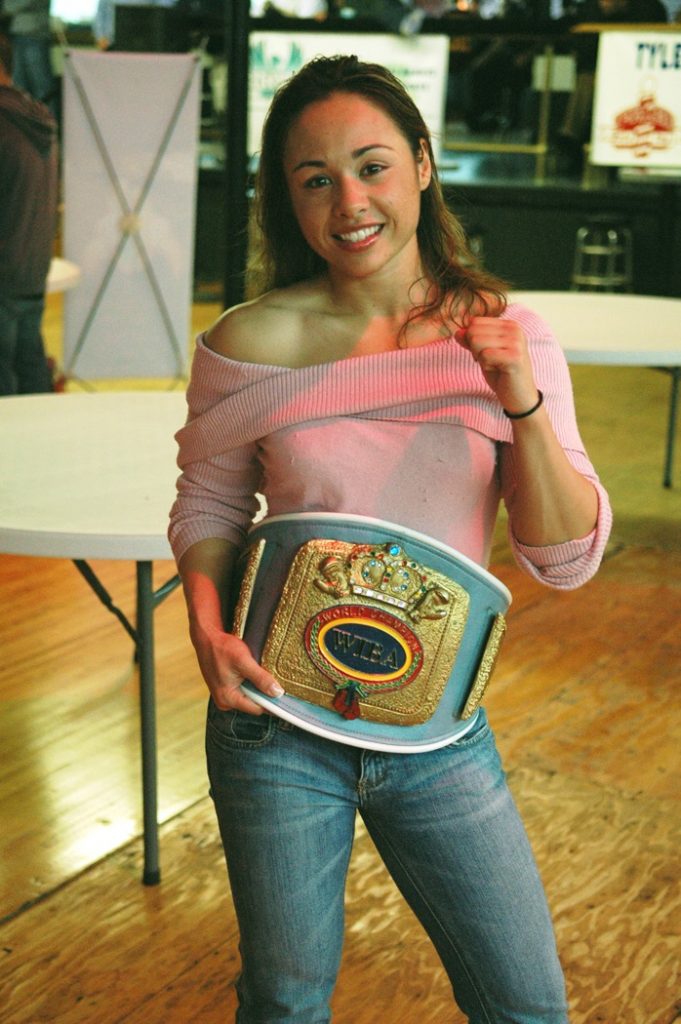 Led by a squad of female prizefighters from the 90s and early 2000s a dozen will be inducted to the Women’s International Boxing Hall of Fame at the end of this month. It’s the class of 2019.

World champions from minimum weights to heavyweights will take their bows on Friday August 30th at the Doubletree Hotel in Brisbane, California. A number of other contributors to the world of female boxing will also be recognized.

It’s a day worth noting.

Women’s prizefighting has endured despite decades of non-recognition and assistance. Former fighters like Sue Fox, who heads the WIBHF and Women’s Boxing Archive Network, have maintained the sport through journalism and other forms of assistance. Where would the sport be without Sue Fox?

Today, fighters like Claressa Shields, Katie Taylor and Mikaela Mayer are cracking through the final barriers that held women’s boxing in near extinction. Until they performed in the Olympic no television network had shown a female prize fight in prime time for nine years until Heather Hardy fought Shelly Vincent in 2016.

Fox began the Women’s International Boxing Hall of Fame on her own with minimal assistance. Though it began in 2014 an actual ceremony has not taken place since 2015. A number of recognized fighters were selected for induction but never formally recognized in a ceremony.

For the next few weeks this web site will briefly introduce these fighters from the last three years. Many will be in attendance at this year’s ceremony.

Sumya Anani (25-3-1, 10 KOs) – mostly fought in the Midwest so it was a number of years before I actually saw her fight in person. It happened in April 2003, at the Palace Indian Game Center in Lemoore. That day there were four female fights. Anani battled against Fredia Gibbs an extremely talented fighter too. The match ended in a technical knockout win for Anani when Gibbs could not answer the bell for round two. Six days later Anani was back in the boxing ring at the Staples Center defeating Lisa Holewyne by decision in a welterweight match. She would retire two years later but was unable to garner a match against Lucia Rijker. That was a match many wanted to see.

Jane Couch (28-11, 9 KOs) – fought out of Great Britain and was famous for stubbornly forcing that country to allow female boxing. She almost singlehandedly broke down that barrier in the United Kingdom. It’s hard to fathom today with female prizefighting now enjoying immense popularity over there. She was a fearless fighter and very strong. The first and only time I saw her perform was against the great Lucia Rijker at Staples Center in June 2003. Though she lost by decision she showed her grit in trading blows whenever the speedy Rijker attack. The fighter known as the “Fleetwood Assassin” spent 13 years as a prizefighter and retired in 2007.

Elena Reid (19-6-6, 5 KOs) – arrived in the professional boxing world with no amateur boxing experience. The former high school cheerleader did have a background in martial arts and a lot of guts. At age 18 she moved from her native Phoenix to Coachella in California, then eventually to Las Vegas. What most people could not see was she was virtually fearless. In the beginning she fought opposition much too big and lost. But once she discovered her weight class she took off. Her most notable early fight was in June 2003 when she faced a relatively unknown Mariana “Barby” Juarez on a nationally televised fight. At first fans did not take them serious. Juarez looked like a model and was indeed pursued by fashion magazines to model. “Baby Doll” Reid was a former cheerleader and together they looked harmless. But when the bell rang an explosion occurred and audiences watching on television were mesmerized. It ended in a draw but both fighters would go on to successful careers. Reid would win two world titles at flyweight and proved to be much more than a pretty face.

Ann-Marie Saccurato (15-6-2, 6 KOs) – was famous for her nonstop pressure and fought many of the best in her era. Sadly, I never saw her fight in person but I did meet her 10 years ago in a female boxing camp in Coachella. Saccurato was one of the few professionals who showed up at this camp comprised of young budding amateurs in their teens and a few early professionals. She engaged with the boxers and taught them some of her training techniques and how to maintain high intensity in their workouts. It was an illuminating experience watching her work with the youngsters. Some of those in that camp proceeded to become top notch professionals and one became an Olympian. Saccurato was an important contributor to that camp and those that attended. She was also a high intensity prizefighter who fought Holly Holm, Jelena Mrdjenovich and others.

Britt VanBuskirk (9-17-2, 5 KOs) – fought from the 1970s to the 2000s with a 13-year time out. She had three wins in three fights and stopped in 1983. When she returned to boxing in 1996 she discovered that female boxing world had improved. I saw her fight in 2000 at Pechanga Resort and Casino where she handed Daisy Ocasio her first loss after six fights. Despite a negative-looking record VanBuskirk was indeed very professional and fought anyone anywhere. She was 42 when she retired.

Jackie Kallen – is one of the most famous non-boxers not only in women’s boxing but in the men’s game too. A Hollywood movie based on her life starred Meg Ryan in 2004 called Against the Ropes. The Beverly Hills-based manager/promoter has been a big proponent of women’s involvement in the prizefighting business. She’s also one of the nicest people you can meet. But she’s also very astute in picking talent and guiding their careers. I’ve known Kallen for more than 20 years now and she continues to break ground.

Tyger Trimiar – Sadly, I never met nor do I know much about Giselle Salamandy and Tyger Trimiar. I do know that Trimiar was the first female to apply for a boxing license in New York. She fought from 1973 until1987 in more than 25 bouts. She won the Women’s lightweight world title in 1979. The Smithsonian Institute requested some of her boxing equipment to save for posterity. Most definitely she was a pioneer and one of the first female prizefighters to be recognized.

Next week we will present the Class of 2017.

When next month brings the Heather “The Heat” Hardy and Amanda Serrano clash at the Hulu Theater Madison Square Garden in New York City, despite being the alleged semi-main event, it will actually be the marquee fight that sells the most tickets and generates the most television interest from viewers.

Serrano and Hardy will sell five times as many tickets as the other bouts combined and will also ignite interest worldwide. Truly it’s the real main event. It might have to be moved from the smaller theater to the actual arena.

On Saturday Aug. 17, bantamweights Florencia Juarez (4-0) and Juliana Basualdo (1-1) meet in a four round bout at Buenos Aires.

Cherneka Johnson won by technical knockout over Arasa Nimnoi (4-4) on Friday Aug. 9. The bantamweight fight was held in Flemington, Victoria.

On Sunday Aug. 18, super featherweights Taynna Cardoso (4-0) and Mayra Gomez (18-9) meet in an eight round bout at Sao Paulo.

On Saturday Aug. 17, lightweights Katherina Thunderz (11-0) and Monica Gentili (6-10) meet in an eight round bout at Ludwigshafen. Also, featherweights Sophie Alisch (3-0) and Vanesa Caballero (1-5-3) meet in a six round bout.

On Thursday Aug. 15, flyweights Ruqsana Begum (0-1-1) and Jacqueline Ortega (0-0) meet in a four round fight at Tijuana.