Countdown to Women’s Hall of Fame and Female Fight News
Written by: David A. Avila 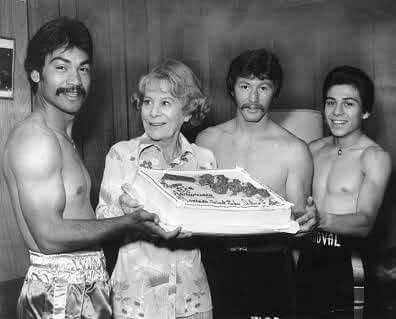 Aileen Eaton – though she passed away many years ago the Olympic Auditorium boxing promoter firmly established the city of Los Angeles as a boxing powerhouse. She brought many of the best fighters to the forefront such as Salvador Sanchez, Armando Muniz, Carlos Palomino, Danny “Lil Red” Lopez, Bobby Chacon, Jerry Quarry and Irish Art Hafey to Southern California. She began working in the boxing business in 1942 with her husband Cal Eaton. When he passed away in 1966 she took over the promotion business and dominated the boxing scene until she passed away in November 1987. She is survived by her son Gene LeBell a hall of fame wrestler and mixed martial artist.

Holly Holm (33-2-3, 9 KOs) – there are still many today who do not know the MMA fighter from New Mexico began as a professional boxer. It’s been six years since the strawberry blonde dominated the welterweight division with her speed and athleticism. From 2002 to 2013 the Albuquerque prizefighter was a major boxing draw and held various super lightweight and welterweight world titles. Now she’s a major MMA star and was the first to defeat UFC’s Ronda Rousey. Many still remember her boxing performances in wins over Ann Saccurato, Mia St. John, Chevelle Hallback and Myriam Lamare.

Daisy Lang (19-3-1, 7 KOs) – She was part of a dynamic duo that propelled female boxing into must-see status in Germany. Lang along with Regina Halmich launched female boxing and proved that women fighters could attract major interest. Lang fought in the super flyweight category from 1996 to 2004 and sold out arenas with her fights against Reka Krempf, Silke Weickenmeier, Galina Ivanova and Regina Halmich. Though born in Bulgaria, she made her name in Germany and helped make women’s boxing a major attraction for decades.

Ria Ramnarine (14-4-1, 2 KOs) – the minimum weight was born and raised in Trinidad and Tobago where most of her fights took place from 1999 to 2012. During her career she fought against Yvonne Caples, Dee Hamaguchi, Leona Brown, Regina Halmich and Olga Julio to name a few. Though she rarely fought outside of her island home she was a good one.

Ana Maria Torres (28-3-3, 16 KOs) – many consider the Mexico City native one of Mexico’s greatest female fighters of all-time in a country that breeds so many great female boxers. Her numerous wars with Mariana “Barby” Juarez including those held in underground battles are legendary. She also had two incredible wars with Tijuana’s Jackie Nava that remain two of the most violent female fights ever seen. It’s no wonder they called her “La Guerrera.”

Ada Velez (20-5-3, 6 KOs) – Born in Puerto Rico the southpaw bantamweight fought many of the top fighters in her era and held her own including wins over Rolanda Andrews, Jackie Chavez and the only one to defeat the talented Melinda Cooper. The Puerto Rican fighter was one of the smartest boxers in her era and now trains fighters in Florida. They didn’t call her “Ace” for nothing. She had the ability to fight on the outside or take it inside. A very underrated fighter.

Myriam Lamare (22-4, 10 KOs) – fought out of Marseilles, France and was not shy about fighting the best. It was the dark ages of women’s boxing in the U.S. but European boxing still kept American fighters busy. Lamare fought a number of the best American and European fighters and was very successful with wins over Belinda Laracuente, Loli Munoz, Jane Couch, and Ann Saccurato. She also fought Holly Holm and Cecilia Braekhus and though she lost those fights, she was the common link to those welterweight queens.

Belinda Laracuente (26-28-3, 9 KOs) – The Puerto Rican boxer burst onto the public eye when she fought Christy Martin in 2000 on the Felix Trinidad-David Reid world title fight in Las Vegas. The boxing ability she showcased that night was rarely seen from female prizefighters and her impressive showing against the great Christy Martin opened eyes. Though she has more losses than wins, her boxing ability has never been questioned and she was one of those that helped female boxing gain a foothold. She was a fearless boxer and fought the best of her era including Sumya Anani, Mary Jo Sanders, Kara Ro, Chevelle Hallback, Layla McCarter, and Nicole Woods.

Jessica Rakoczy (33-3, 12 KOs) – A Canadian fighter who mostly fought out of Las Vegas, Nevada and captured world titles in the lightweight division. She fought from 2000 to 2013 before moving into MMA and had wins over Belinda Laracuente, Ada Velez and Terri Blair. During her last years in the sport she dropped down to super bantamweight. Rakoczy was always a very polished fighter and knew how to use her height and length.

Mary Jo Sanders (25-1-1, 8 KOs) – a talented super welterweight who fought from 2003 until 2008 before retiring after a mercurial career. Based out of Auburn Hills, Michigan, she defeated most of the best fighters though it was difficult to find welterweights back then. But those that did challenge her were Chevelle Hallback, Layla McCarter and Melissa Del Valle. It was Holly Holm that gave Sanders her first and only loss. The rematch four months later ended in a draw. Sanders never fought again and retired at age 34.

Vonda Ward (23-1, 17 KOs) – at 6’6” in height she easily is the tallest female fighter in history. She was a former basketball star and played for the University of Tennessee. It was in 2000 that she made her boxing debut with a first round knockout of Faye Steffen. Ward racked up 13 knockout consecutive wins before winning the heavyweight world title by decision against Monica McGowan in 2002. She had several memorable battles including wins over Martha Salazar and Cassandra Giger. Many also know her for her crushing loss to Ann Wolfe by knockout that is now a highlight reel for many female boxing fans. But on most occasions Ward was the one doing the knocking out.

Julie Lederman – Through the years Ms. Lederman has become the best boxing judge in New York. Her father is the much beloved and departed Harold Lederman of HBO fame. But Ms. Lederman has established a reputation as being an excellent judge and is often recruited for world title fights. Based out of New York City she has overseen fights such as the Andy Ruiz’s knockout win over Anthony Joshua and scored the Mikey Garcia win over Sergey Lipinets. She is a very talented judge.

Belle Martell – a former entertainer in the vaudeville era, she later became the first female granted a license as a referee in the state of California. She also worked as a trainer and promoter. Along with her husband she organized numerous amateur tournaments in the Los Angeles area. She passed away in 1972.

Bernie McCoy – One of the few journalists to cover female boxing on a regular basis and one of the best in the fight game. McCoy is based out of New York and was a strong contributor to WBAN from 2003 to 2017 when he retired. He’s covered many of the top female fighters of the last dozen years or so including Laila Ali, Christy Martin and Holly Holm. He is the first male to be inducted to the International Women’s Boxing Hall of Fame.

Florencia Juarez (5-0) knocked out Jualiana Basualdo (1-2) in the third round on Saturday Aug. 17. The bantamweight fight took place at Buenos Aires.

Maria Roman (15-4-1) was the winner by unanimous decision after 10 rounds versus Julieta Cardozo (12-4) on Friday Aug. 16. The bantamweight fight took place at San Juan, San Juan. Also, the Leonela Yudica versus Isabel Millan fight was declared a no contest after Yudica suffered a gash due to an accidental clash of heads in the fourth round.

On Friday Aug. 23, flyweights Jennifer Meza (0-0) and Catalina Alvarez (1-3) meet in a four round fight in Buenos Aires.

Tayla Harris (5-0-1) knocked out Renee Gartner (0-1) in the second round on Wednesday Aug. 14. The middleweight fight took place at Sydney.

On Saturday Aug. 24, heavyweights Annie Mazerolle (7-3) and Giovanna Gonzalez (3-2) meet in a six round clash at Richibucto. Also, flyweights Jani Babineau (1-2) and Brenda Balderas (0-1) meet in a four round fight.

Katherina Thanderz (12-0) was the winner by unanimous decision after eight rounds versus Monica Gentili (6-11) on Saturday Aug. 17. The lightweight match was held at Ludwigshafen. Also, Sophie Alisch (4-0) beat Vanessa Caballero (1-6-3) by decision after a six round featherweight bout.

On Saturday Aug. 24, bantamweights Iris Contreras (3-0) and Rebecca Light (1-4) meet in a four round fight in San Mateo, Calif.

On Saturday Aug. 24, super flyweights Amy Salinas (2-0) and Samantha Salazar (6-5-2) meet in a six round fight at Pojoaque, New Mexico.