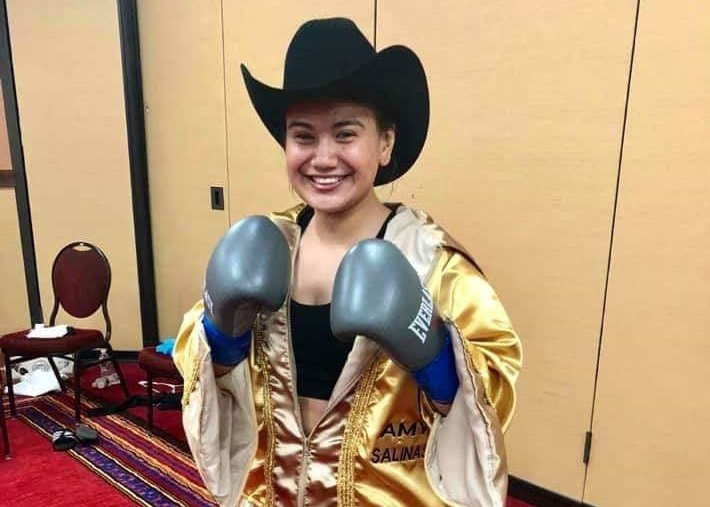 It would only be natural for you to box when your whole family does as well. For 18-year-old super flyweight Amy “Picosita” Salinas (2-0) of Las Cruces, New Mexico, it could have gotten a little bit more complicated but it only took a talk from her father, former amateur Ben Salinas, to convince her mom to let her train at the age of seven.

“My dad has always been supportive, he has always like for me to do it,” she said. “My mom at first was a little nervous, she would turn her head when I would fight but now it is something we are used to, it is not a big deal anymore.  My dad had to ease her into it but she understood it was something my brother and I wanted to do or at the time I wanted to do so she never tried to stop me from training or fighting.”

Her younger brother Vicente, 14, also fights as an amateur.

Salinas (2-0) is set to meet Samantha Salazar (6-5-2) in a six round super flyweight match on Saturday Aug. 24, at the Buffalo Thunder Casino in Pojoaque, New Mexico.

Inspired by her pro boxer uncle Jose “Shorty” Salinas, found herself in a ring a year later in her first amateur fight at the age of eight but didn’t get the result she wanted.

“I have always been smaller and I remember I was way shorter than my opponent,” the now five-foot fighter reminisced about her first fight.  “I was under weight and I remember her having to jump rope to get to the weight I was at.  I did lose my very first fight.  I fought her again in I think it was my third or fourth fight and then I beat her.”

How did an eight-year “Picosita” get back on that proverbial horse again and continue her fighting career after losing her first fight?

“My coach (former amateur boxer and uncle Hugo Salinas) always motivates,” she explained.  “It was never ‘I lost, I don’t want to do this anymore’, it was more of I lost but we are going to train harder to get her back.  That is what I remember.  He kept telling me, ‘it’s ok, it’s your first one, we are going to go home and we are going to do better so we fight her again and we can beat her.’ We did.”

That fight began an extensive amateur career of about 100 fights with Salinas and her family traveling all around the United States for her to compete.  In late 2017 Salinas made it on the USA Boxing female team and found herself at the World Championships in India. Unfortunately Salinas fell short against Gloria D’almeieda of France in the tournaments third day of competition.

“I think I learned a lot from my amateur experience,” she said.  “I learned I need be up working out, getting ready, training hard because if I’m not doing that then whoever I am going to fight could be doing that.  The person working the hardest is going to be the one at the end of the day who wins.”

“I learned from the first fight to never give up,” Salinas continued.  “I learned there is always going to be people who tell you shouldn’t be doing that, it is a male-dominated sport, and that is going to be hard for some people to understand.  This is what I want to be doing, this is what I like.  There is always going to be people telling you that there is always somebody better than you and you are not going to beat them.   It always comes down to how you train and how your mentality is set up.  I think thanks to my family my mentality is strong and I am thankful for everything they have helped me achieve and supported me through.”

Despite having aspirations for an Olympic run, Salinas and her team instead opted to go pro earlier this year.  “At first that was our plan to try for the Olympics.  I think we realized I had more of a professional style. My style is a little bit different than what the judges were looking for as an amateur.  We talked about that and decided that was what we were going try.”

Known for her toe-to-toe aggressive style, in her first fight as a pro Salinas took on quite an undertaking by going six rounds and facing the then undefeated in four fights Leanna Martinez in January of this year.

She won a unanimous decision.

“We knew that getting me a fight was going to be a little big tough because of my amateur experience,” she explained.  “We knew we weren’t going to get somebody doing their pro debut as well right off the bat.  My coach always thinks highly of me, we train hard, we fight hard, everything we do we put everything into it.”

“The six rounds wasn’t much of, it wasn’t something we were too worried about,” she stated confidently.  “I was actually excited to do the six rounds. I think the more round the better I do.”

When asked about what she knew about the much more experienced Martinez, at least as professional, before their fight, Salinas admitted it wasn’t much.

“I personally don’t like to look into whoever I am fighting,” Salinas said.  “I think that is my coach’s doing, he trains me for them so I trust whatever he has to say and whoever he wants to fame me against.  I go with it.  I just knew that she was older and she had more experienced.”

Since then Salinas defeated Danielle Saidanha in a four rounder last March.

Only 18-years-old and at 2-0, Salinas has her whole career ahead of her so where does she see herself in five years?

“Still boxing, hopefully signed with somebody good, well known,” she hoped.  “Hopefully if it is possible a world champion.  Have my name out there, have Salinas out there.”

Outside of the ring Salinas is a recent high school graduate and is waiting for her 19th birthday this fall to join her local police academy to pursue a career in law enforcement.  “I think I like hands-on things and I think being a police officer helping people is something I would like to do.”

To listen to the interview in its entirety, please visit BlogTalkRadio.com/2MinRound