San Francisco Shines with Boxing Hall of Fame and Tourney
Written by: David A. Avila 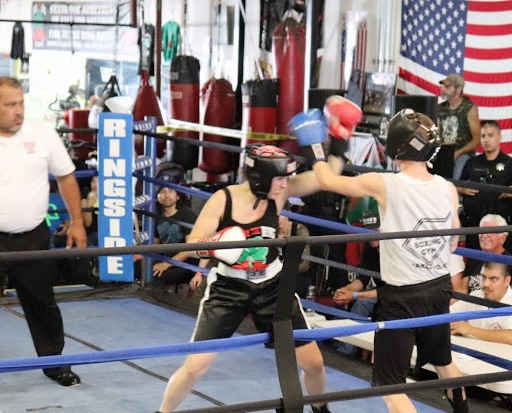 They came from Hawaii, San Diego, Utah, and other parts of the USA to compete and compare in the Beautiful Brawlers amateur tournament in San Francisco.

More than 60 female boxers showed their talent in two boxing rings on Saturday Aug. 31, with ages spread out from eight year olds to 28-year-olds looking to engage in the competition.

Usually we concentrate on professional boxing but on this day www.thePrizefighters.com desired to take a peek into the future of women’s prizefighting.

Female boxing has grown and continues to influence not just other women, but men into its fold. It was never as evident as seen in this tournament that was filled with proud parents, uncles, aunts and friends watching women in the boxing ring.

The future of women’s professional boxing looks extremely bright as was seen in the warehouse located in Brisbane a small town south of the city of San Francisco. Female boxers shined and none were shy about entering the boxing ring especially with several current and former world champion prizefighters watching.

Numerous female stars of the past were inducted into the International Women’s Boxing Hall of Fame on Friday. It was a one-day gathering of champions at the Doubletree by Hilton Hotels in Brisbane, Calif.

More than 100 friends, family members and journalists gathered at the IWBHF ceremony that saw fighters and non-fighters of the past three years receive recognition for their contributions to the sport of female professional boxing.

The president of the IWBHF Sue Fox was instrumental in creating the organization to honor those currently and previously involved in women’s prizefighting. She spent her own money and time to keep the women’s hall of fame dream alive for the past five years. Women’s boxing has benefitted greatly.

Women fighters have been ignored for decades by the media. It’s only recently that interest in female boxing has finally gained traction. Until the late 1990s women were mostly ignored.

Fox’s Women’s Boxing Archive Network or WBAN has kept the sport of female prizefighting alive by covering as much as possible.

On Friday, several newly inducted members of the Hall of Fame spoke on the topic.

“I thought nobody was going to remember me, but here I am at the Hall of Fame,” said Wendy Rodriguez a multi-world champion from Los Angeles during the late 90s and early 2000s. “We need the Hall of Fame to be around to show we have talent like the men do.”

One former world champion Ria Ramnarine remembers being told women can’t fight and that led to anger and commitment.

“I’m going to make you eat your words,” Ramnarine said about hearing a boxing coach try to dissuade her from training in a Trinidad and Tabago gym. She proceeded to win world titles in the minimum weight and light flyweight divisions in a career that spanned 13 years.

All of those that receiving awards know one vital element was necessary for the ceremony taking place – Sue Fox who was sitting quietly a few feet away.

“We all know we wouldn’t be here without you,” said Sumya Anani to Fox the president of the Hall of Fame organization and a great historian for the sport.

Fox remains female boxing’s most valuable treasure and we greatly appreciate all of your efforts and kindness. You are truly the heart and soul of women’s boxing.

Japan will host an all-female boxing card featuring two world title fights and several regional belts on Thursday Sept. 12, at Tokyo’s Korakuen Hall. Leading the cast of elite Japanese fighters will be Ayaka Miyao challenging Mexico’s Monserrat Alarcon for the WBA minimum weight world title. No word yet on how it can be seen.

Shannon O’Connell (18-6-1) was the winner by split decision after six rounds versus Biana Elmir (3-1) on Saturday Aug. 31. The super bantamweight fight was held at Bendigo, Victoria. Also, Reanne Ware (1-1) beat Lorrinda Webb (1-1) by decision after four rounds in a featherweight fight.

On Sunday Sept. 8, lightweights Pasa Malagic (13-6) and Selma Baltic (4-1) meet in a four round fight at Banovici.

On Saturday Sept. 7, super lightweights Carolyn Redmond (0-0) and Veronica Diaz Marin (0-3) meet in a four round bout at Hamilton, Ontario.

Calista Silgado (18-11-3) knocked out Silvia Gonzalez (3-9) in the second round on Saturday Aug. 31. The super bantamweight clash too place in Cartagena. Also, Olga Julio (30-18-2) knocked out Kairuan Montenegro (2-7) in the fifth round of their super flyweight clash.

Spain’s Mary Romero (5-2) knocked out Bilgenur Aras (4-1) in the sixth round on Saturday Aug. 31. The bantamweight title fight took place at Hessen.

On Saturday Sept. 7, welterweights Jessica Schadko (5-0) and Matija Paradjik (3-0) meet in a 10 round title fight at Bayern.

On Saturday Sept. 7, super lightweights Dilar Kisikyol (0-0) and Nana Chakhvashvili (4-12) meet in a four round bout at Hamburg.

On Sunday Sept. 8, bantamweights Felmi Sumaehe (5-0) and Saowaluk Nareepangsri (8-16) meet in a 10 round title fight at Jakarta.

Akane Fujiwara (4-1) knocked out Suphansa Pho-ong (1-1) in the second round on Tuesday Aug. 27. The featherweight fight took place at Tokyo. Also, Kae Okumura (1-0) beat Saki Horiguchi (0-3) by decision after four super flyweight rounds. Plus, Honoka Kano (2-0-1) knocked out Ayaka Maeda (1-1) in the first round of a minimum weight fight.

On Sunday Sept. 8, super flyweights Nanako Komuro (0-0) and Michiko Abiru (0-3) meet in a four round bout at Yachiyo, Chiba.

Qui Li Chen (1-0) knocked out Shu Wah Yan (0-1) in the second round on Saturday Aug. 31. The super bantamweight fight was held in Macao.

On Saturday Sept. 7, minimum weights Regina Chavez (1-0-1) and Monserrat Diaz (0-0) meet in a four round bout at Naucalpan, Mexico City.

Savannah Marshall (7-0) was the winner by fifth round technical knockout over Daniele Bastari (2-1) on Saturday Aug. 31. The super middleweight fight took place at London, England.

On Friday Sept. 6, featherweights Rebecca Cruz (0-0) and Myasia Oglesby (0-3) meet in a four round bout at New Orleans, Louisiana.

On Saturday Sept. 7, bantamweights Shelly Barnett (4-1-2) and Noemi Bosques (11-14-3) meet in an eight round contest at Milwaukee.