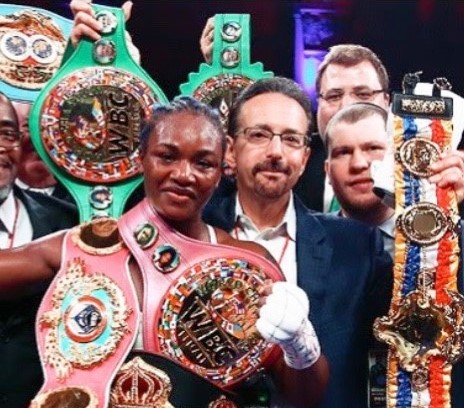 Mark Taffet; From Corn and Peas to Mayweather and Pacquiao

Life can take you down many roads.

One day you are analyzing how well a particular brand of frozen peas are doing with housewives in a supermarket, another day you are in the thick of negotiations for the biggest pay-per-view boxing event in history.

That is the story of 62-year-old Mark Taffet, MBA from the Wharton School of Finance and former head of pay-per-views for Home Box Office, otherwise known as HBO.  Now, Taffet is best known for managing and orchestrating perhaps the greatest career in female boxing history, that of Claressa Shields, the undefeated, unified and undisputed middleweight champion of the world.

“I worked a few years at General Foods in the Birdseye frozen food division,” Taffet said earlier this month after a late-night flight from the east coast to Las Vegas, Nevada, to the 2-Minute Round, the all-female boxing podcast.  “While I was there every quarter, I was in the finance group, I would do presentations about our analysis of our new products. In my case it was the new vegetable products, corn, peas and broccoli that were putting out every quarter.  About a year and a half in the job I began to lose interest.  It wasn’t something that in a Saturday night cocktail party I really cared to talk about with friends.  At the same time, I got a phone call from a gentleman named Andy Caplan and he said, ‘Mark, I am at this new company called HBO.  I want you to come over here and join us.’”

According to Taffet at the time of that fateful phone call, he didn’t even know what HBO was.  He toiled in the finance department of the then burgeoning network for seven years studying every area of the company.  He then was tapped by head of sports programming, Seth Abraham.

“He said, ‘Mark please help me with the financial model that justifies the amount of money I need to spend,” Taffet remembered.  “I studied at the time that helped them redo a Mike Tyson deal.  Most importantly when I did the study, I saw that in six cities across America there was these microwave dishes on people’s rooftops that were generating more money from consumers in one night than what HBO was paying for national rights.”

“I then said to HBO if we don’t get into this business which we eventually called pay-per-view, we are going to lose our boxing franchise,” he said.  “When this goes from six to 16 to 60 to 200 cities, they are going to dwarf the money we are paying.  They said, ‘well, you wrote this expensive study, we have no idea of what you are talking about so would you like to run it?’”

And that was the beginning of pay-per-view.

After his career with the network and developing pay-per-view into the powerhouse it became, Taffet felt he needed to give back to the sport that had changed his life.

“I had a great time at HBO and I was blessed, I had an incredible career and it changed my life,” Taffet answered when asked why female boxing was the next phase of his career.  “I felt that I wanted to give back.  I looked around the boxing landscape and women’s boxing has never gotten the due I felt it deserved.  All of a sudden you see this young lady Claressa Shields, a two-time gold medal winner, the only back-to-back gold medal winner in boxing in American history, male or female.  So, I said on her broad shoulders I think this dream can come true.”

Taffet confessed of stalking Shields, calling her and everybody that knew her to convince her that he was the right man for the job.  Taffet revealed he said to Shield, “my skills and my background with my commitment to you can lift you and women’s boxing to levels never before seen.”

That was compelling enough to Shields, now 24, to be willing to work with Taffet.  The former HBO executive promptly came up with a two-year plan.  At the time Shields was still thinking of whether of going pro and or vying for yet another gold medal.

Since then in only three short years and nine fights, Shields has become one of the most decorated female prizefighters of all time.  In only her second fight she captured the vacant NABF 168-pound title and by her third the WBC Silver strap in the same weight.  In fight number four she captured the vacant IBF world title and the full-fledged WBC belt.  In her sixth fight she added the WBA belt also at 168 pounds and by her seventh she was a two-divisional world champion dropping eight pounds to fight in the middleweight division and pick up the vacant WBC, IBF and WBA titles.  In her last fight she added the WBO version of the crown to become the unified and undisputed champion of the middleweight class.

On October 5th she’s looking to make history again when she goes after the vacant WBO 154-pound title against Ivana Habazin.  If she achieves the feat, she would be become the fastest three-divisional world champion in history.

The fight will be televised live by Showtime.

“It comes from her God-given skills that are unique to her, she is once in a lifetime,” Taffet said of their success.  “Also, a great plan that was put together with great execution and the fact that Claressa has the same vision I do.  We speak the same language, even though we come from different parts of the world, when we talk boxing, we speak the same language.”

Not everything has been rainbows and sunshine as Taffet reveals there have been in some obstacles on the road to greatness.  “Some of them I thought might be there and didn’t fully understand them and some were new.  First of all, in general when we started the talent pool was thin.  That is a problem because you are going to hit a ceiling with your growth.  I saw a need to develop talent in the weight classes Claressa was going to be fighting at to ensure the longevity of her career and meaningful fights.”

“Second was I thought there was a long way to go in the amount of money women were being paid,” he continued.  “Third, there wasn’t really any television.  Those are the major issues.  They became a critical part of our strategic plan.  One by one, point by point, I went at them and I went at them hard.”

It is no secret Shields speaks her mind, in person and even more so on social media.  At times her unfiltered opinion has gotten her in hot water, a fact that doesn’t escape her manager.

“What I have said to her is, ‘you need to be true to yourself,’” he continued.  “At the end of the day your fans will love you for being true to yourself.  I have raised the fact that certain sponsors could have an issue with some of the things she does, says and some of the positions she takes.  She is not in business for sponsors, she is in business for Claressa Shields, her fans and boxing history.”

There are some sponsors that are going to be very courageous and very understanding,” Taffet said.  “They are going to say they want to be with a woman who stands up strong.  I want to be with a woman who is about strong, empowered women.  One who states her mind when she needs to.  I still think Claressa could think twice about some of the things she says but 90% of the things she says I am behind her.  I am behind her 100% because she is being true to herself and she is standing up for women all around the world. Claressa is going to find her way, she is going to change her thoughts about some of the things she does and says.  It is part of her development as a young woman.  She deserves to go through that development herself.  I talk to her about it, I let her know my point of view on it.  She hears everything I say and then she puts it together in her mind and then she does what is right for Claressa Shields.  I love and respect her for that.  Sometimes she is over the edge and I cringe but she is Claressa Shields and that is who she is always going to be.  I respect her and love her for it and I will make sure I will defend her for it.”

Beyond that Taffet assures us there are facets of Shields’ personality that we don’t get to see including her overwhelming desire to help women’s boxing get to another level.

“There is nothing she wants more, she puts the success of women’s boxing ahead of her own,” Taffet revealed.  “She always talks to me privately about how do we move the game forward?  How do we lift it for women?  How do we lift it for all women, the ones coming down the road and in the next Olympics?  She doesn’t talk about Claressa Shields.  I think she knows that Claressa Shields is going to take care of Claressa Shields and Mark Taffet is going to take care of Claressa Shields.  She wants to always challenge me to make sure the whole game is being lifted for all women and I love her for that because that is not what a 24-year-old kid does.”

In 2018, Taffet was voted female boxing’s Manager of the Year by various publications.