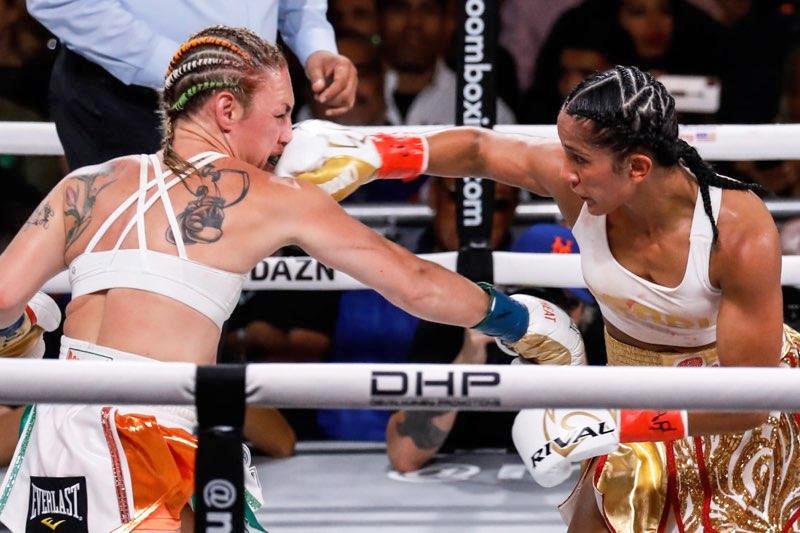 In 2016, former gold medalists Claressa Shields and Katie Taylor departed the amateur boxing world and entered the prize rings without skipping a beat.

Women’s prizefighting continues to grow because of the two undisputed champions and their many exploits continue to attract more and more fans worldwide. Lately, three separate media outlets have dedicated time toward female boxing.

Two weeks ago they streamed back-to-back days of female world title prizefighting. Was it an aberration or a sign of things to come?

Joseph Markowski, executive vice president of DAZN in North America, said during the L.A. kickoff press conference that female prizefighting is a mainstay on the streaming network that presented Franchon Crews versus Maricela Cornejo in Los Angeles and Amanda Serrano versus Heather Hardy in New York City in mid-September.

“We see huge potential in women’s boxing,” said Markowski and likens it to women’s pro tennis where winnings by women are amongst the largest in all sports. “We are optimistic in its growth.”

Markowski expects to see unified lightweight world champion Katie Taylor become a mega attraction in the U.S. as she is in the United Kingdom and Ireland. Every time she fights the number of hits grows more each time said the DAZN executive.

He also added that the numbers for the New York and Los Angeles female title fights were very good but did not reveal the numbers. What he did offer was that more female fights are being discussed and that Jessica McCaskill’s rematch with Argentina’s Erica Farias looks to be an exciting future match.

Next week Claressa Shields (9-0) seeks to add a super welterweight world title when she meets Croatia’s Ivana Habazin (20-3) for the vacant WBO world title and a version of the WBC title on Saturday Oct. 5, in Flint, Michigan. Showtime will televise the main event.

No further female bouts have been discussed by the television network but Shields remains the top American female attraction in the USA. She is also the top paid American female prizefighter and seeks to unify the super welterweight division too.

Last week during a conference call Showtime said it remains in the female fight game.

“Showtime has a long history of showing women in boxing,” said Chris DeBlasio, Showtime spokesman. “Since 2017 we have featured todays elite women’s boxing.”

ESPN showcases Top Rank’s Mikaela Mayer but has not ventured outside of her fights. They could become a player in the game if they choose but so far they remain committed only to Mayer a former American Olympian.

Next year could be a stellar year for female prizefighting viewing.

Adams, 36, won gold medals in 2012 and 2016 and then was given the WBO flyweight title without beating the actual champion Mexico’s Arely Mucino. Both were supposed to meet earlier this year but Adams was injured and unable to challenge Mucino. Then when Mucino suffered an injury she was basically stripped of the title and it was given to Adams without a fight.

The WBO did not respond to our query.

On Saturday Sept. 28, lightweights Yanina Lescano (5-1) and Pamela Benavidez (10-9-3) meet in a four round fight at Concordia.

Bianca Elmir (4-1) was the winner by unanimous decision after six rounds versus Suman Kumari (3-2-1) on Saturday Sept. 21. The super bantamweight fight was held in Southport, Queensland.

On Thursday Sept. 26, light flyweights Kim Clavel (9-0) and Xenia Corneac (10-4) meet in an eight round bout at Montreal.

On Saturday Sept. 28, super lightweights Kandi Wyatt (8-1) and Dayanna Gonzalez (6-2) meet in a six round fight at Calgary. Also, super bantamweights Bree Howling (0-0) and Claudia Vargas (0-4) meet in a four round bout.

Tomoko Okuda (5-2-2) and Kanako Taniyama (2-0-1) fought to a draw after eight rounds on Monday Sept. 16. The bantamweight title fight was held in Sakai, Osaka.

Leticia Uribe (6-14) won by unanimous decision after six rounds versus Fredee Gonzalez (6-15-1) on Monday Sept. 16. The featherweight bout was held in Hidalgo.

Anna Krasnoperova (2-0) beat Laura Yessenkeldi (0-1) by decision after four rounds on Monday Sept. 16. The lightweight bout was held in Moscow.

On Saturday Sept. 28, super bantamweights Nurshahidah Roslie (14-2) and Fan Yin (8-0) meet in a 10 round title fight at Singapore.

On Saturday Sept. 28, bantamweights Bukiwe Nonina (14-4-1) and Flora Machela (6-5) meet in a six round fight at Johannesburg.

Enerolisa De Leon (5-2-2) knocked out Karla Mendoza (0-1-2) in the first round on Saturday Sept. 21. The featherweight fight was held in Madrid.

Sunsanee McDonnell (1-0) beat Saule Tolegen (0-1) by decision after four rounds on Saturday Sept. 21. The welterweight fight was held at Pattaya.

On Friday Sept. 27, lightweights Kallia Kourouni (10-2) and Monica Gentili (6-11) meet in a six round fight at Bethnal Green, London.

On Saturday Sept. 28, super welterweights Nikita Silvera (0-0) and Augustina Markelionyte (1-0) meet in a four round fight at Staffordshire.

On Saturday Sept. 28, featherweights Bec Connolly (2-6) and Monika Antonik (1-17) meet in a four round match at Swindon.

Shadasia Green (3-0) beat Mexico’s Irais Hernandez (2-4-2) by unanimous decision after six rounds on Saturday Sept. 21. Green had won her first two fights by knockout, but had to settle for a decision win against hardened veteran Hernandez at Wilkes-Barre, Penn.

On Saturday Sept. 28, super bantamweights Shuretta Metcalf (7-3-1) and Carla Torres (5-5) meet in a six round contest at Irving, Texas.