Jessica McCaskill vs Erica Farias 2
Written by: David A. Avila 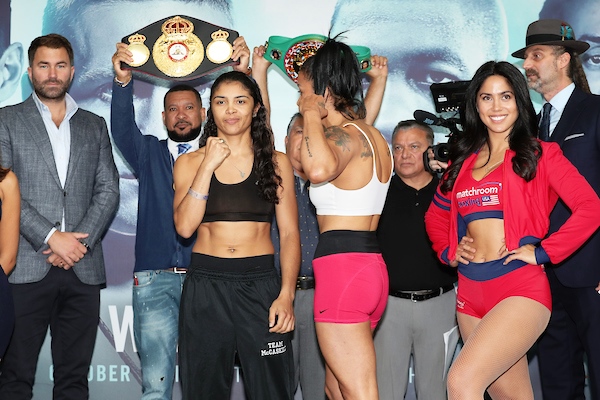 This time McCaskill (7-2, 3 KOs) walks into the boxing ring at Wintrust Arena in Chicago on Saturday Oct. 12, to face former champion Farias (26-3, 10 KOs) with not only the WBC world title, but the WBA as well. DAZN will stream the rematch.

The country of Argentina might be a little angry at McCaskill who not only took the WBC super lightweight title from Farias a year ago with a withering performance, but then added salt to the wound with a heated win for the WBA belt over Anahi Sanchez too.

Does she have a secret recipe for success over Argentine fighters?

“I feel right now I am the game-changer,” said McCaskill. “There are people that have been in the game that I am dethroning, I’m on a fast-track; I’ve won two world titles and fought for three in just nine fights, I feel like I am the wild card and people are watching to see what is going to happen next.”

For years Farias was one of the best female fighters pound for pound. When she met McCaskill a year ago in October 2018, many were surprised that despite Farias vast experience, the Chicago fighter out-witted her with a mixture of angles and attacks that the Argentine could never figure out.

That was a year ago.

Farias, 35, has fought 29 pro bouts and had only lost to Delfine Persoon and Cecilia Braekhus until she met little-known McCaskill. Well, you can strike out words “little-known” from any conversation when talking about McCaskill. The world knows her now.

“In the beginning people didn’t see me as a competitive player in the sport, so we had to do a lot of different things to get in the door,” said McCaskill during the press conference in Chicago. “We’re proud of the goals we’ve hit and we have more goals to meet.”

It’s been a rapid race that McCaskill has managed to run to near perfection.

Rick Ramos, the manager and trainer for McCaskill, knows that the former champion Farias has a lot of experience and toughness. His plans for a repeat win are simple.

“We jump on her,” said Ramos of their war plan. “Erica hasn’t fought in a year.”

“Summer has skill and good punching power,” said Ramos adding that she is also a former two-time Junior National champion as an amateur.

Getting back to McCaskill, the unified world champion knows at age 35 years of age, no time can be wasted. But a win over Farias sets up a possible rematch with Ireland’s Katie Taylor who is scheduled to fight WBO super lightweight titlist Christina Linardatou on November 2. If both win, they could meet each other sometime next year.

Two years ago McCaskill and her team managed to convince Taylor to meet her in a fight. The Chicago fighter surprised many with her aggressive attack that forced Taylor to resort to plan B and win by decision in England. It surprised the boxing world. Now a return match is a possibility especially with McCaskill holding two world titles at super lightweight. If Taylor wants to unify the super lightweight division as she accomplished in the lightweight division, she must get through McCaskill. But first, McCaskill must beat Farias again.