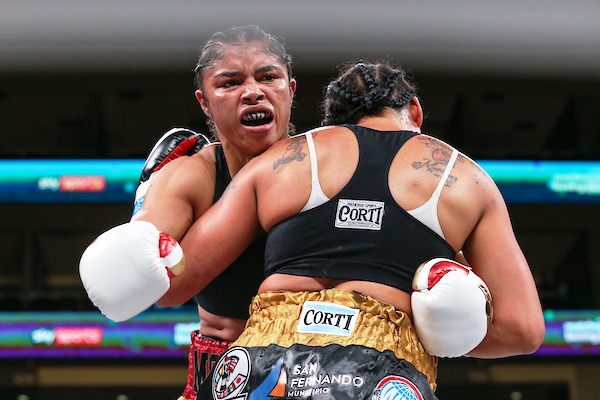 A more appropriate name would be “La Anaconda”

Farias showed an overwhelming penchant for clinching, grabbing and holding tactics than a willingness to exchange blows with McCaskill. The rematch proved to be frustrating to watch for those in Chicago and watching around the world.

The art of boxing does not include holding regardless of what some trainers teach in their gyms. It’s illegal according to the rules and for a major reason. It bores everyone to tears watching a hug fest.

Christian Curiel, the referee for the fight, deducted a point from Farias for holding but did not follow through. The Mexican referee allowed the former lightweight and super lightweight world champion to continue her clutch and grab tactics almost until the end of the fight. It was Curiel’s responsibility to keep the fight under control and he let Farias grab away the night.

“I was shocked at the way she (Farias) fought. We were expecting to knock her out. I was disappointed at the referee letting her get away with that,” said Rick Ramos, trainer and manager for McCaskill. “There was nothing Jessica could do.”

McCaskill did her job, or as much as she possibly could and punched whenever the opportunity arose. But Farias showed the world she had no answers to win the fight, only to survive.

Attention all trainers and fighters out there. Do not rely on holding as a tactic for defense. It’s not defense, its’ being lazy. Fans don’t love it, television viewers don’t love it, and nobody loves it except for the guilty parties utilizing this illegal manipulation.

Amateurs seem to be taught at a young age how to hold. Forget it. Erase out of your minds the way I and many others are trying to erase the memory of Farias grabbing McCaskill for 10 rounds last Saturday.

Adelaida “La Cobra” Ruiz (9-0, 4 KOs) battled to a unanimous decision victory after six rounds with Las Vegas fighter Mikayla Nebel (2-8). Most expected a knockout win due to their win and loss records. But in women’s prizefighting it’s all about who you have fought more than what your record looks like.

Nebel came to fight, not fall down.

A year ago Ruiz put together a knockout string of four consecutive fights. One of those foes had five wins and no losses and she was still able to brutally end the fight with a single punch in a result that was rated the 2018 “Knockout of the Year” by our publication.

Ruiz has developed a reputation as a banger and Nebel had developed her own reputation as a fearless competitor willing to challenge the bigger names. Though she’s been fighting since 2012, Nebel only has 10 pro bouts including two clashes with former featherweight world titlist Heather “The Heat” Hardy and another with Shelly Vincent. That’s very good competition.

In all six rounds Ruiz attacked like one of those rampaging robots on the TV show Battle Bots and Nebel kept trying to catch her with just the right punch. Despite receiving more fastballs than a Justin Verlander catcher, she kept looking for that homerun punch. That’s prizefighting.

On Friday Oct. 18, bantamweights Augustina Belen (2-0) and Lucia Los Angeles Ruiz (2-2) meet in a four round bout at Monte Grande.

On Saturday Oct. 19, bantamweights Roxana Bermudez (2-1-1) and Antonella Molina (1-6) meet in a four round bout at Rosario.

On Friday Oct. 18, middleweights Tayla Harris (5-0-1) and Margarite Butcher (0-2) meet in an eight round bout at Flemington.

On Saturday Oct. 19, super lightweights Jessica Camara (6-1) and Beatriz Aguilar (6-2-1) meet in a six round fight at Ontario.

Sarah Mahfoud (9-0) won by unanimous decision after eight rounds versus Enerolisa De Leon (5-3-2) on Saturday Oct. 12. The featherweight bout was held at Hilleroed.

On Saturday Oct. 19, flyweights Ilaria Scopece (8-0) and Valeria De Francesco (2-0) meet in a 10 round title fight at Lombardia.

On Saturday Oct. 19, super flyweights Karina Fernandez (12-4-1) and Cecilia Santoscoy (2-5) meet in an eight round bout at Chihuahua. Also, super bantamweights Karla Gonzalez (2-0) and Brenda Ruacho (0-1) meet in a six round bout.

On Sunday Oct. 20, lightweights Victoire Piteau (3-1) and Raphaelle Lachaume (0-0) meet in a four round bout in Monte Carlo.

Talia Smith (1-0) defeated Toni Moki (0-2) by decision after four rounds on Friday Oct. 11. The middleweight bout was held in Auckland.

On Wednesday Oct. 16, flyweights Carleans Rivas (7-6-4) and Floryvic Montero (5-7) meet in a six round bout at Calbayog City.

On Saturday Oct. 19, lightweights Oleksandra Sidorenko (7-0) and Argentina’s Mayra Gomez (18-9) meet in an eight round fight at Lomianki.

On Sunday Oct.20, super flyweights Simangele Hadebe (6-3-2) and Thema Zuma (5-3) meet in an eight round fight at Pretoria.

Gabriela Timar (2-0) won by unanimous decision after six rounds versus Andrea Jenei (1-13) on Saturday Oct.12. The super flyweight match was held at Basel.

Umi Ishikawa (8-3) won by technical knockout in the fourth round over Tassana Paladsrichuay (4-5) on Wednesday Oct. 9. The WBC minimum weight regional title fight was held at Bangkok. Also, Wassana Kamdee (4-5) beat Jarusiri Rongmuang (3-3) by knockout in the third round of their light flyweight clash.

Jessica McCaskill (8-2) won by unanimous decision after 10 rounds versus Argentina’s Erica Farias (26-4) on Saturday Oct. 12. The WBC and WBA super lightweight world title clash took place in Chicago and was a rematch of their fight a year ago.

Kristine Ion-Rood (2-0) won by knockout over Daisha Duran (0-1) in the second round on Saturday Oct. 12. The middleweight fight took place at Davenport, Iowa.

Amy Lemenager (1-0) knocked out Kayla Brady (0-2-1) in the second round on Friday Oct. 11. The super middleweight fight took place at Duluth, Minnesota.