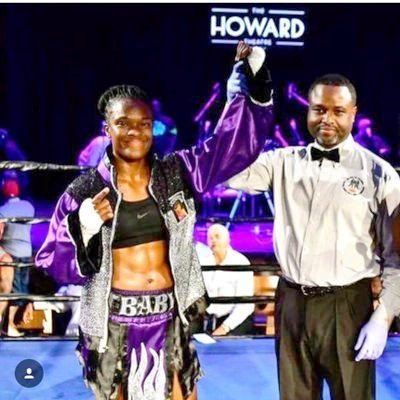 Not too long ago anyone interested in watching female prizefighting was out of luck. Television rarely showed the women for decades especially in the USA. That’s all changed.

Here’s who you can watch:

Tiara Brown (8-0) defends the NABF featherweight title against Vanessa Bradford (5-1-2) in a schedule eight round contest on Thursday Oct. 24, in Brooklyn, New York. The fight will be streamed by DiBella Entertainment live on UFC Fight Pass.

Brown, a police officer by day and a prizefighter by night, will be defending the NABF title for the first time. The Washington D.C. police officer has four consecutive knockout wins.

Also on the same card will be Brooklyn’s own Melissa St. Vil (11-4-4) who returns to the boxing ring for the first time since clashing with WBC lightweight titlist Delfine Persoon last March.

Facing St. Vil will be former world champion Dahiana Santana (36-11) of the Dominican Republic six round fight in the lightweight division.

St. Vil formerly held the WBC Silver super featherweight title and is moving up in weight for this fight. The fight will also be shown on UFC Fight Pass. Doors open at 6:30 p.m. ET and the card begins at 7 p.m. ET. Make sure to watch it on UFC Fight Pass. Go to this link: https://www.ufc.tv/page/fightpass

Though promoted by Top Rank, the former US Olympian has been unable to lure any of the world champions into the boxing ring. Offers have been made to WBC titlist Eva Wahlstrom and others but all have refused. Apparently the tall speedy American has scared off the competition.

Mayer will be facing another Argentine fighter in Zamora. It seems only the Argentine and Mexican super featherweights are willing to accept challenges. Her last two foes were Lizbeth Crespo of Argentina and Yareli Larios of Mexico. The European titleholders both refused to fight Mayer according to Top Rank.

One European fighter eager to test the world title market has been England’s Savannah Marshall.

This past weekend Marshall (8-0, 6 KOs) won by stoppage over American veteran Ashleigh Curry (8-13-4) to lobby for a world title bid. The contest took place in Newcastle, England on Saturday.

Marshall is recognized for being the only fighter to defeat Claressa Shields in the amateur boxing world. As a pro, they have yet to meet. Both have scorched the social media world with verbal blasts against each other.

A showdown between the two is inevitable and probably next year if Marshall can drop down to super welterweight where Shields is now campaigning.

Gomez is making the third defense of the world title but somehow is allowed to skip over challenges from WBC interim titlist Kenia Enriquez or WBC Silver titlist Seniesa Estrada. The Venezuelan fighter Rengifo was knocked out by East L.A.’s Estrada when she won the WBC Silver title a year ago.

Tijuana’s Enriquez has held the WBC interim version for more than two years but has not been allowed to fight for the actual title. Maybe there’s a reason.

Roxana Bermudez (2-1-2) and Antonella Molina (1-6-1) fought to a majority draw after four rounds on Saturday Oct. 19. The bantamweight fight was held in Rosario.

Sandra Villarruel (0-0-1) and Daniela Molina (1-4-2) fought to a majority draw after four rounds on Saturday Oct. 19. The flyweight fight was held in Buenos Aires.

Yamila Belen (7-4) was victorious by unanimous decision after four rounds against Patricia Reinoso (1-6-1) on Friday Oct. 18. The lightweight match was held at Neuquen.

Tayla Harris (6-0-1) knocked out Margarite Butcher (0-3) in the second round on Friday Oct. 18. The Australian middleweight title fight took place in Flemington.

Vanesa Taborda (10-12-3) defeated Eva Voraberger (25-7) by knockout in the fifth round on Saturday Oct. 19. The bantamweight title fight was held in Bregenz.

Sofia Abraamyan (4-1) knocked out Cintia Cinjel (6-3) in the third round on Saturday Oct. 19. The super flyweight match was held in Charleroi.

On Friday Oct. 25, super bantamweights Tania Walters(0-0) and Perla Rojas (1-6) meet in a four round bout at Toronto.

On Friday Oct. 25, super featherweights Leila Bueadoin (0-0) and Claudia Flores (0-1) meet in a four round contest at Quebec.

On Saturday Oct. 26, minimum weights Jianping Ouyang (3-1-1) and Charimae Salvador (4-3) meet in an eight round fight at Chongqing.

Maria Cecchi (2-0) won by decision after six rounds versus Jovana Milovanovic (0-5) on Sunday Oct. 20. The bantamweight fight was held in Rome.

On Saturday Oct. 26, super bantamweights Tatyana Zrazhevskaya (8-0) and Gabriella Mezei (9-19-5) meet in an eight round fight at Berlin.

Teresa Almengor (5-1-2) knocked out Haydee Zapa (3-4) in the first round on Saturday Oct. 19. The super flyweight fight took place at Boquete. Also, Yaditza Perez (12-13-1) knocked out Jamileth Vallejos (1-3) in the fourth round of their flyweight match.

Carleans Rivas (8-6-4) won by split decision after six rounds against Floryvic Montero (5-8) on Wednesday Oct. 16. The flyweight fight was held at Calbayog City.

Oleksandra Sidorenko (8-0) beat Argentina’s Mayra Gomez (18-10) by decision after eight rounds on Saturday Oct. 19. The lightweight fight took place in Lomianki. Also, Laura Grzyb (2-0) knocked out Valeria Kovacs (2-4) in the first round of their featherweight bout.

Cathaysa Delgado (2-0) knocked out Maria Firtat (0-1) in the first round on Saturday Oct. 19. The featherweight fight was held at Canary Islands.

On Saturday Oct. 26, minimum weights Denis Castle (2-2) and Sutthinee Bamrungpao (4-6) meet in a 10 round title fight at Bangkok.

Savannah Marshall (8-0) stopped Ashleigh Curry (8-13-4) in the third round on Saturday Oct. 19. The super middleweight fight was held at Newcastle. Also, April Hunter (1-0) beat Borislava Goranova (11-59-4) by decision after four rounds in a welterweight match.

Kirstie Bavington (3-1-1) knocked out Monika Antonik (1-18) in the second round on Friday Oct. 18. The welterweight fight was held in Wolverhampton.

On Thursday Oct. 24, lightweights Janaisa Morandin (0-1) and Anyela Lopez (0-0) meet in a four round bout at Shreveport, Louisiana.

On Saturday Oct. 26, super featherweights Mikaela Mayer (11-0) and Argentina’s Alejandra Zamora (7-3) meet in a 10 round title fight at Reno, Nevada.