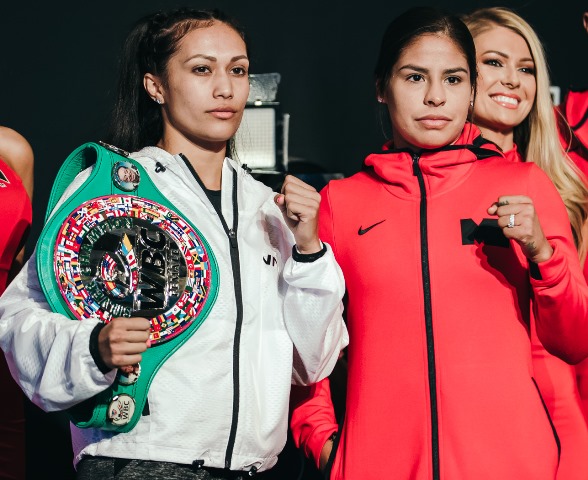 LAS VEGAS, Nev.-Despite the shoves, accusations and words tossed like lightning bolts, Seniesa Estrada and Marlen Esparza have yet to fight.

A brief press conference on Thursday morning by Golden Boy Promotions was unable to contain the fire and vitriol that erupted from the two flyweights Esparza (7-0, 1 KO) and Estrada (17-0, 7 KOs) who will face each other Saturday Nov. 2, for 10 three-minute rounds at the MGM Grand for the interim WBA flyweight world title.

“Can we make this the main event,” jibed Bernard Hopkins of Golden Boy Promotions.

The winner gets a crack at the actual champ Naoko Fujioka of Japan. But that’s another story.

East L.A.’s Estrada has held a long time beef with former Olympian Esparza out of Houston, Texas. Over the years the pair have traded insults and accusations and now they finally get to meet in the boxing ring.

“I do my talking in the ring,” said Estrada, 27, whose nickname “Super Bad” fits her ringside persona, but outside the petite fighter seems more like a university student. “She’s just a person with a bad attitude.”

Two days ago Estrada shoved Esparza who shoved back. It was the culmination of words and taunts traded over social media the past two years.

“You claim to be the victim. What are you the bully or the victim? asked Esparza at the press conference inside the David Copperfield Theater inside the MGM.

“I’ll be the bully on Saturday night,” snapped back Estrada.

Estrada began boxing at the age of eight when her father Joe Estrada took her into a boxing gym in East L.A. The boxing bug hit her hard and she was hooked for good.

Even at an early age Estrada showed talent and grit as she won tournament after tournament. When she hit her pre-teens, a reporter from the L.A. Times had heard rumors of her abilities and began compiling information that resulted in a series of features stories that ran on the front page.

Blessed with speed and power Estrada also had a unique boxing style not used by female boxers and seldom by male fighters. It’s a mix of Roy Jones Jr. and Sergio “The Latin Snake” Mora with whom she later shared the same trainer in the same gyms over the years.

Estrada was an instant phenom in the female boxing community.

In her teen years Estrada was able to continue her success and won consistently. But as she entered international tournaments her style that consists of slipping punches and a low crouch, was not favored by judges who are accustomed to the hands high orthodox style of boxing.

After one particular international event that did not go well, Estrada and her team decided to jump to the professional world.

“It was obvious that I wasn’t getting credit for punches landed,” said Estrada of her international amateur experiences. “The referees were always penalizing me for slipping punches. They kept saying you can’t do that. It was bizarre.”

Estrada worked in the same gym as another East L.A. fighter Francisco “Ponchito” Bojado who was with Gary Shaw Promotions at the time. He asked that Estrada be placed on a fight card and her pro debut took place on May 2011 at Chumash Casino in Santa Ynez, Calif.  Estrada won every round against tough Maria Ruiz.

Her second fight took place at Fantasy Springs in Indio, Calif. She nearly was taken off the card when she stepped on the scale before the actual weigh-in to appease local photographers and one of the inspectors noticed she weighed only 104 pounds and not 112. The contracted weight was set at 112 and Estrada was ruled too light. After some negotiations with the inspector she was given time to load up on soda and cookies and stepped back on the scale and barely made 108 and ¼ pounds. She was accepted and then proceeded to battle against the much bigger Blanca Raymundo and win by decision.

From lean to mean

Then came the lean years.

“It was really hard for Seniesa,” said Joe Estrada who aside from being her father also advises and informally handles public relations. “Those were really bad years but she stuck to it. We knew things were going to get better.”

Backed by her ardent fans Estrada’s drawing power convinced Los Angeles-based promoters to put her on several cards including at the Inglewood Forum in Inglewood, California. It’s also when fans began recognizing her as “Super Bad.”

Wins over Carley Batey, Maria Andaverde, Selene Lopez and Cristina Fuentes showed the boxing public and promotion companies that Estrada was not just popular but capable of defeating opposition between 105 and 118 pounds.

Both 360 Promotions and Golden Boy Promotions offered her a promotional contract and she accepted the latter.

“For the first time I was able to concentrate on just boxing and its’ made a big difference,” said Estrada. “Boxing is my only focus.”

Estrada’s match with Esparza is the stuff of dreams for women’s prizefighting.

Though the fight will be held at a higher weight class, Estrada feels that’s a non-issue.

“It’s all about consistency,” said Campos. “She can’t let Marlen get comfortable in there.”

Ever since female prizefighting grabbed the media attention these past three years, most of it has focused on those fighters on the Midwest and East Coast. Now it’s a Wild West showdown and a large proportion of media has descended to watch with anticipation.

“This is what I’ve been dreaming about,” said Estrada. “It’s the reason I signed with Golden Boy.”

Seniesa versus Marlen, it’s the Wild West all over again.