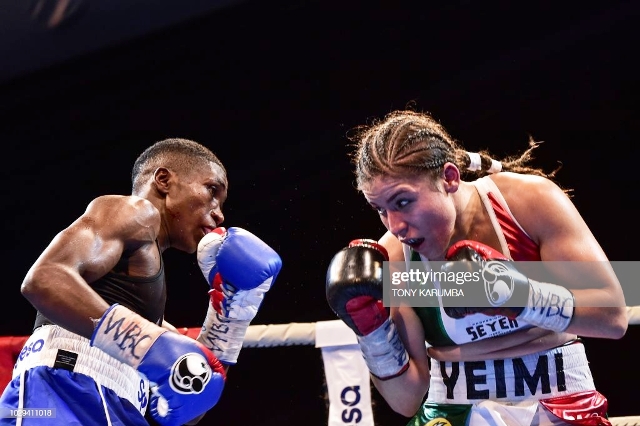 Fatuma Zarika, 34, the current WBC super-bantamweight titlist, must be wondering if she will ever get away from Catherine Phiri or Yamileth Mercado.

After defeating Phiri of Zambia in her first defense of the green and gold strap back in late 2017, she made her second defense against Chihuahua, Mexico’s Mercado nearly a year later in September of last year via a split decision.  Six months later Zarika faced Phiri again earning a unanimous decision for the second time over the Zambian in the third defense of the WBC belt.

This Saturday night Zarika (32-12-2, 17KO) will face Mercado (14-2, 4KO) for the second time.  This time the champion has traveled to the challenger’s native city of Ciudad Cuauhtémoc to defend her title for the fourth time since capturing via split decision over wily veteran Alicia Ashley in October of 2015.  By capturing the title Zarika became the first Kenyan female fighter to win a world title.

A victory by Mercado would make her the first female world champion not only of her hometown but of her state Chihuahua.

“This is as great motivation for me, the fact now it is in my hometown,” Mercado said recently.  “I am ready to take my revenge and for the title to stay in Mexico.  I am ready, excited to be facing Zarika again.  I have to put everything on the line, I can’t disappoint everybody that believes in me and not in my hometown.  I will climb down from the ring with that belt no matter what it costs me.”

Zarika’s road towards the world title has been a long and arduous one.

She began as a professional in late 2010 and for the next two years won all her fights except one, a draw, in her home country of Kenya.  Her first loss came in her 10th fight as a pro to Frida Wallberg.  Her subsequent 11 losses after that have come versus world class opponents such as Ina Menzer, Jelena Mrdjenovich, Delfine Persoon, Eva Wahlstrom, Jennifer Han and Amanda Serrano.

In early 2015 she fought Amanda’s older sister, Cindy Serrano, to a six-round draw.

Her second defeat to Amanda Serrano back in September of ’15 was the last loss suffered. Since then she has turned the page stringing together eight wins in a row.  During this latest run she captured the title with that aforementioned win over Ashley then came wins over Phiri and Mercado.

The first encounter between Zarika and Mercado ended with a controversial split decision in favor of the then home fighter, the fight took place in Nairobi, Kenya, with scores of 99-91 and 97-93 for Zarika and a close 96-94 for the 21-year-old Mercado.

“I am very excited to be here in Yamileth’s country,” Zarika said at the final press conference before the fight this Saturday night.  “She went to fight in my country against me and now it is my turn to come to her home.  I know it is going to be a great fight but I know my fists will do my talking and I will return home with the belt.”

Since that night of the first fight Mercado, who began boxing at the age of 10 to combat her weight, has been screaming for the rematch but first, she had to get back on the winning column with successful tilts against Alys Sanchez and Karina Fernandez, but via unanimous decision.  With the Sanchez win Mercado captured the vacant WBC International 122-pound title and with Fernandez she defended it for the first time.

The charismatic Mercado began her career at the age of 16 with seven straight wins. Her first loss came at the fists of Jessica Arreguin Muñoz in early 20017 in Mercado’s first scheduled 10-rounder.  The fight, for the vacant WBC FECOMBOX super bantamweight title ended in a unanimous decision for Muñoz.  After that loss Mercado won her next five, not jumping back to the 10-round limit until her first world title opportunity against Zarika.  Since then, in her wins over Sanchez and Fernandez, the Mexican has remained at the female world championship limit of rounds.

In her most recent fights Mercado has been traveling west from her home in Ciudad Cuauhtémoc to Hermosillo where she has joined the camp of Alfredo Caballero, better known for being the trainer of current WBC super featherweight champion Miguel Berchelt and current WBC super flyweight king Juan Francisco “Gallito” Estrada.

“Everything is set to make history,” the excited Mercado stated in her turn at the podium.  “This is the most important fight of my career.  The fact that I could become the first female world champion from my home state of Chihuahua and to be able to achieve it at home is a great motivation for me.  We have done a great training camp for this fight.”

“I am ready with my objective set,” she continued.  “I will not fail myself or my people. It is a dream come true and an honor to be able to challenge for the world title at home.  The support of everybody motivates me.”