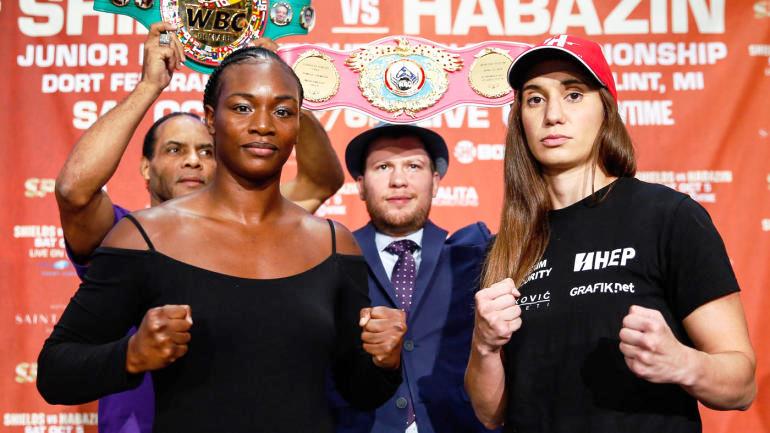 Anytime fans can watch the best perform is a special moment. Whether its’ Shields, Katie Taylor, Mariana Juarez, Amanda Serrano, Layla McCarter or any of the other elite female prizefighters, if you can watch them exhibit their fighting skills in person or via television it’s like heaven for fight fans.

Not too long ago it was near impossible to see female prizefighting anywhere. Finding the Holy Grail was probably more attainable for nearly a decade. That has changed emphatically.

Shields, 24, represents the face of American boxing and brings her electric talent whenever she steps in the prize ring. What I personally enjoy watching is the added weaponry to her already vast arsenal. When she first entered the pro game I could see the tremendous potential she possessed fresh out of the Rio Olympics. Now, every time I see her perform she adds another wrinkle to her game. It’s mesmerizing to me as a boxing connoisseur and probably terrifying to potential foes.

This fight against Habazin was supposed to happen back in early October but sometimes things happen for a reason. Though the fight was canceled due to the attack on Habazin’s trainer James Ali Bashir, the fight is back on track.

“I’ve been thinking about this since October and I have more of an incentive now given what happened,” Habazin said. “I feel like I’m fighting for James Ali Bashir, as well as for my own pride and respect. I’m also fighting for my country. I want to make Croatia proud that I am their daughter, and I feel that I now have their full support.”

Fighting as a super welterweight may prove an unseen obstacle for Shields. Dropping down in weight as not as simple as most fans believe. Ask Amanda Serrano who dropped down to super flyweight and told ThePrizefighters.com it was the most difficult obstacle she endured in recent years.

Habazin, who is an inch taller, will be fighting in her more natural weight class. Shields is venturing into yet another weight division as she motors toward pursuing history. She will be the quickest to gain three division world titles in the least amount of fights if she can beat the weight loss and Croatia’s Habazin.

“My goal is to become three-division champ faster than any man or woman in history,” Shields said.  “This is a very significant fight for both of us. We have both trained really hard twice and great opportunities await the winner, so hopefully three times is the charm.”

Mark down Jan. 10th on your calendar.

Many consider Dicaire, 33, extremely talented and a potential road block for Shields. The blonde Canadian has a formidable challenge of her own on Saturday against Venezuela’s Suarez.

Suarez, 32, has been fighting for 13 years and began as a super bantamweight and has grown into the super welterweight division. It’s an interesting matchup.

The other super welterweight clash pits American fighter Miller against Mexico’s Ibarra. Though the American has a solid amateur background, you can never overlook Mexican fighters. They have tremendous survival skills in the boxing ring.

Thankfully UFC Fight Pass will be streaming the fight card on Saturday night.

A world title fight that took place in Mexico saw Yamileth Mercado wrestle the WBC super bantamweight championship from Kenya’s Fatuma Zarika by unanimous decision. Though hometown decisions are often questioned, on this occasion it was the ease of the victory that was a surprise.

In a story that appeared Monday on the Standard, a Kenyan publication, a quote by Zarika said: “For four years, I’ve held the title and the only good thing I’ve received was help from Sportpesa. The government did not do anything, so, its better the belt remains in Mexico where they can take good care of it.”

Last Saturday, Zarika gave a flat performance and lost decisively to Mercado. It has happened to others many times. But to mention that a government should take care of a champion leaves a bitter taste.

When countries get involved in pro sports, bad things happen. There are endless examples of countries meddling in championship fights. It seldom results in fair results. And based on Zarika’s complaints she wants her native country to subsidize her. You can bet that Mexico does not subsidize Mercado or any Mexican fighter.

Zarika allegedly signed a contract that specifies a rematch if she lost. Let’s see what happens in a third contest.

On Friday Nov. 22, bantamweights Deborah Dionicius (28-2) and Virginia Carcamo (5-12-3) meet in a six round fight at Buenos Aires.

Linda Winmar (2-2) won by technical knockout in the first round over Arasa Nimnoi (4-5) on Saturday Nov. 16. The super lightweight fight took place in Punchbowl.

Samantha Vella (1-0) knocked out Marisa Kuewan (0-1) in the first round of their fight on Friday Nov. 15. The lightweight fight took place in Flemington.

On Friday Nov. 22, super welterweights Tayla Harris (6-0-1) and Janay Harding (1-4) meet in an eight round fight for the Australian title at Flemington.

On Saturday Nov. 23, lightweights Rachel Loder (5-0) and Tania Reid (1-2-1) meet in an eight round match for Australia’s title at Tweed Heads.

On Saturday Nov.23, super bantamweights Lorrinda Webb (1-1) and Sally Blunt (0-1) meet in a four round bout at Wantirna, Victoria.

On Saturday Nov. 23, super featherweights Djemilla Gontaruk (15-6-2) and Angela Cannizzaro (6-5-1) meet in an eight round contest at Herstal.

On Saturday Nov.23, welterweights Carolyn Redmond (1-0) and Gisela Luna (0-3) meet in a four round fight at Niagra Falls, Ontario.

Elhem Mekhaled (13-0) won by disqualification in the sixth round versus Gabriella Mezei (9-21-5) on Friday Nov. 15. The super featherweight fight took place in Paris.

On Friday Nov. 22, lightweights Giulia Grenci (3-1) and Elena Ghezzi (3-1) meet in a 10 round fight for the vacant Italian title at Sarnica, Lombardia.

Yamileth Mercado (15-2) defeated Kenya’s Fatuma Zarika (32-13-2) by unanimous decision after 10 rounds on Saturday Nov. 16. The WBC super bantamweight title fight took place at Ciudad Cuauhtemoc. It was a rematch of a fight that took place a year ago that Zarika won.

On Saturday Nov. 23, bantamweights Wendellin Cruz (0-0) and Ninoska Morales (0-0) meet in a four round match at Managua.

Katharina Thunderz (13-0) was the winner by split decision after 10 rounds versus Danila Ramos (8-2) on Saturday Nov. 16. The super featherweight title fight was held in Oslo.

Natasha Jones (9-1) won by technical knockout over Bianka Majlath (3-4) in the second round of a scheduled six-round fight on Friday Nov. 15. The lightweight fight was held in Liverpool.

Stevi Levy (1-0) won by decision over Bojana Libiszewska (5-38) after four rounds on Friday Nov. 15. The lightweight match was held in Norfolk.

On Saturday Nov. 23, super lightweights Sangeeta Birdi (1-0) and Denisa Cicoova (2-3) meet in a four round bout at London.

On Saturday Nov. 23, lightweights Chelsey Arnell (0-0) and Vaida Masiokaite (1-7-2) meet in a four round fight at Yorkshire.

Destiny Day-Owens (2-0) was the winner by decision after four rounds against Dasha Ragland (0-2) on Saturday Nov. 16. The super lightweight match was held at Glen Burnie, Maryland.

On Friday Nov. 22, super lightweights Nicole Reinhart (1-0) and Anyela Lopez (0-0) meet in a four round match at Detroit.