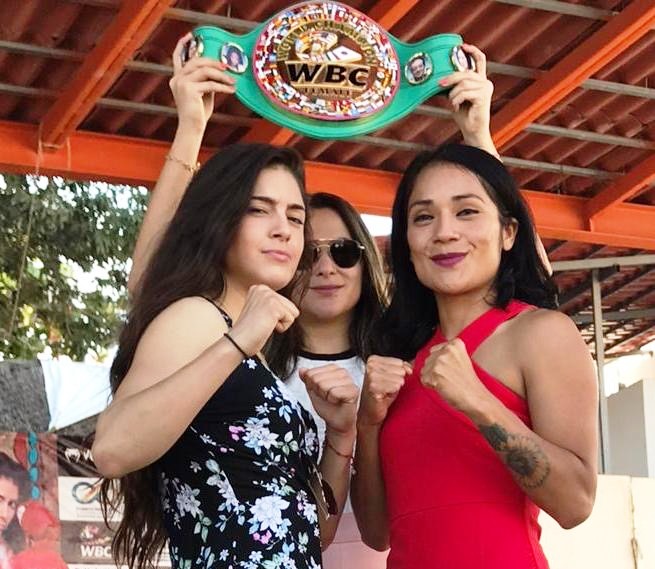 Nobody could have imagined that on the night in May of 2017 Guadalupe “Lupita” Martinez (19-9, 6KO) would come out not only with her hand raised but the with WBC green and gold super flyweight belt firmly strapped around her waist.

Martinez wasn’t challenging just any champion, but against – at that time – the longest-reigning female champion in Mexico, Zulina “Loba” Muñoz.  The scheduled 10 round affair, what would have been Muñoz’s 12th title defense, should have been a just a formality in Muñoz’s trek towards a big-name fight against Mariana “Barbie” Juarez.

After 10 hard-fought rounds Martinez walked away with a close unanimous decision, the belt and a bright future.

This Saturday night Martinez of Mexico City will be stepping in the ring against Debani Balderas (11-3-2, 3KO) in a scheduled 10 round.  The championship fight will be televised live in Mexico by mega-channel Televisa and presented by Cancun Boxing in association with Promociones del Pueblo.

“I don’t care who it is, what her name is, I am going to defend my title,” the confident Martinez exclaimed.  “I am a proud champion of the WBC.  I want to be the best super flyweight in the world.  I hope my opponent comes well prepared.  I am going to do what I always do, give my best, give a war like I always do.”

Balderas, not to be outdone, made a confident claim at the final press conference before the fight this Saturday night.

“I am very happy for the opportunity and to be able to represent female boxing,” Balderas stated at her time at the podium.  “There is no doubt the fight will be a tough one and I must fight intelligently.  I guarantee you that it will be a war and that I am going to knock the champion out so there is no doubt.”

Martinez had to reply.

“If she says she is going to knock me out, I only want to remind her that I have defended my title against three former world champions,” Martinez rebutted.  “I know she has a dream; I know what it means to want to be a world champion.  I respect her because I know she can be dangerous.  But I have my own goals, nobody is going to stop me and I am going to be the best super flyweight in the world.  I am ready for anything.”

The fight will mark Martinez’s fifth defense of her title.

“This title is very important for me,” the mother of two stated.  “I am very happy in having the opportunity to defend it again, for a fifth time.  The other four defenses have been very tough fights and I think we are making a name as one of the best champions out there.  I think the goal of tying the number of defenses, 10, that Muñoz and (Ana Maria) Torres achieved is a bar set very high but my goal is to break that record.”

Before her championship run, Martinez’s record had not been as impressive.  Although the majority of her nine losses have been against world level opposition, Daniela Bermudez, Ana Arrazola, Debora Dionicius, Naoko Shibata, Linda Laura Lecca and Ava Knight, she had never been able to get over the hump.

“There is no doubt I’ve had tough tests,” Martinez said at the final press conference prior to the fight this Saturday night.  “I fell but I got back up and that is why today I am a world champion.”

Her last loss was over three years ago, a technical decision loss to Jasseth Noriega but since then she has been on a tear.  After two unanimous decision wins over Leticia Uribe and Guadalupe Solis, Martinez earned the opportunity against Muñoz.

Her four defenses have been against Carlota Santos, Irma Garcia and Yulihan Luna, all unanimous decisions.  In her last fight last April, Martinez faced her biggest challenge yet, former 108 and 112-pound champion Jessica “Kika” Chavez.

Martinez squeaked away with a split decision.  It was Martinez’s aggression and conditioning over the better boxing skills of Chavez that gave her the win. It also cemented Martinez as one of the most solid female champions in Mexico.

“I don’t see myself yet as one of biggest names,” she frankly said.  “I think I still have some way to go.  There are a lot of fighters who I look up to and motivate me.  I hope in the future I can be like them.  I consider it a big responsibility to hold a green and gold belt.”

On Saturday the 27-year-old Martinez will have the advantage in experience over the slightly younger Balderas, 23.

The fight this Saturday night will be Balderas’ first opportunity for a world title.  Nothing reflected in her record says she deserves one. After losing her pro debut in 2015 against Jazmin Gonzalez, the younger cousin of multi-time world champion Jhonny Gonzalez, Balderas put together a 4-0-1 record against overmatched opponents before her second loss to the actual WBC super-bantamweight champion Yamileth Mercado in early 2018.

Balderas strung together six more wins and another draw before suffering her third and most recent loss to Diana Fernandez this past September live on Televisa.  Since then Balderas has scored a win over unknown Linda Vazquez.

“We are going to close the year in the best way possible,” Martinez said.  “With a win, and I am very thankful with my promotor since he has assured us our next fight.”

It was announced with a win Guadalupe Martinez will be giving Jessica “Kika” Chavez a rematch in her next fight in the first half of 2020.

Another name Martinez mentioned for the upcoming year is none other than Mariana “Barbie” Juarez.  “I am ready to defend my title against anybody.  My promotor has mentioned to me they would like for me to fight for a WBC Diamond title and I don’t want any doubt that I am the best so that is why I want to face ‘Barbie’ Juarez.”