Bermudez, Bopp and Baumgardner and Female Fight News
Written by: David A. Avila 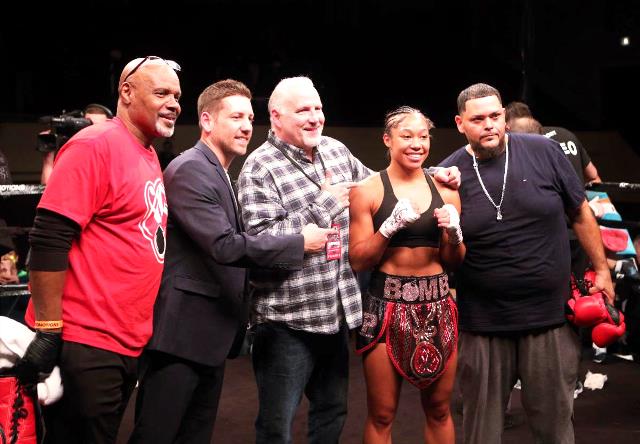 The world of female prizefighting has slowed a bit, but not by much. Several of the top fighters engaged in contests this past weekend.

Argentina’s super talented Daniela Bermudez shook out whatever dust or rust against Marianela Ramirez, a fellow Argentine with a so-so record this past weekend in Santa Fe. She easily handled the rugged challenger and retained the WBO bantamweight title by unanimous decision.

She wants bigger game like fighting in America, she said on social media.

Bermudez is not alone. Her fellow Argentine icon Yesica “La Tuti” Bopp also wants a shot at fighting in the USA. She told thePrizefighters.com more than a year ago that it was her primary goal to fight in a world title fight somewhere in the USA.

Ironically, Bopp and Bermudez fought each other once before back in 2014 in a battle that took place in the flyweight division. In that contest the quicker and smaller Bopp walked away with the win by unanimous decision. Since that fight, Bermudez has gone on a tear winning 11 fights with one split draw against Paola Benavidez in 2017. But she also defeated Mexican great Mariana Juarez in Mexico City in a match held at bantamweight in 2016.

A ton of top notch fighters await Bopp who hasn’t lost a fight since losing by decision to Mexico’s Jessica Chavez in 2013. It’s the only loss on her record in a career that spans from 2008 to the present. The speedy flyweight could fight Mexico’s Kenia Enriquez, California’s Seniesa Estrada or Texas Marlen Esparza. All would be intriguing match ups for female boxing.

Bermudez also has a ton of competition awaiting her arrival. Beginning with Amanda Serrano, Helen Joseph, Rosalinda Rodriguez and Adelaida Ruiz would all give the Argentine star a run for her money. That’s not including Mexico’s roster of bantamweights like Lupe Martinez with designs to move up from her perch as the WBC super flyweight titlist and Mariana Juarez who would probably entertain a rematch with Bermudez in the US.

Argentines, come on down.

Baumgardner bludgeoned Pacheco with a withering attack to the body and head that forced the referee to step in and save the Argentine fighter. It was an impressive performance.

“Alycia looked fantastic tonight, and showed that she is one of the top fighters in the world.  She is ready and wanting to fight anybody in the world.” said Marshall Kauffman, CEO of King’s Promotions.

Iara Altamirano (7-0-1) was the winner by unanimous decision over Julieta Cardozo (12-5) in a 10 round fight on Saturday Dec. 14. The Argentine bantamweight title fight was held at Buenos Aires.

Micaela Sarfati (3-0) beat Lucrecia Belen Arrieta (0-1) by knockout in the fourth round on Friday Dec. 13. The bantamweight match was held at Buenos Aires.

On Wednesday Dec. 18, bantamweights Cherneka Johnson (12-0) and Nurshahidah Roslie (14-3) meet in a six round match at South Brisbane.

Sara Marjanovic (6-7) beat Marija Zivkovic (1-4) by knockout in the second round on Saturday Dec. 14. The super featherweight fight took place at Plovdiv. Also, Joana Nwamerue (1-0) knocked out Kristina Svarc (0-4) in the first round of their lightweight contest.

Jhosep Vizcaino (10-9) was the winner by decision after 10 rounds versus Maria Vega (9-4) on Friday Dec. 13. The super flyweight fight took place at Quito.

Priscilla Peterle (2-0) knocked out Marija Raznatovic (0-3) in the second round on Saturday Dec. 14. The super welterweight fight took place at Nord.

Vanessa Caballero (3-7-3) won by decision after six rounds versus Marina Sakharov (5-9-2) on Saturday Dec. 14. The featherweight fight was held in Oise.

On Saturday Dec. 21, bantamweights Marie Connan (1-0) and Mailys Gangloff (2-1) meet in a six rounds at Dreux.

Maria Lindberg (19-6-2) defeated Mariam Tatunashvili (1-14-2) by decision after 10 rounds on Saturday Dec. 14. The super welterweight match was held at Oberhausen.

Tenkai Tsunami (27-12-1) knocked out Jessebelle Pagaduan (12-2-1) in the eighth round on Saturday Dec. 14. The WBO light flyweight world title fight took place at Kagoshima. It was Tsunami’s second defense of the WBO title. She also fought Naoko Fujioka to a draw in a flyweight title attempt this past July.

On Saturday Dec. 21, super flyweights Casey Morton (8-2-3) and Saowaluk NareePangsri (8-17) meet in an eight –three minute round fight at Cebu.

Maja Milenkovic (10-10) knocked out Nana Dokadze (1-3) in the first round on Saturday Dec. 14. The super bantamweight match was held at Basel. Also, Gabriela Timar (3-0) beat Teona Pirosmanashvili (2-6) by decision after a six round super flyweight fight.

Olivia Belkacem (10-1) was the winner by decision after six rounds versus Bianka Majlath (3-5) on Saturday Dec. 14. The welterweight match took place at Fribourg.

Amy Timlin (4-0) beat Claudia Ferenczi (20-73-8) by decision after six rounds on Saturday Dec. 14. The bantamweight fight was held at Bolton.

April Hunter (2-0) was the winner by decision after four rounds against Monika Antonik (1-19) on Friday Dec. 13. The welterweight bout took place at Tyne and Wear.

Alycia Baumgardner (9-1) knocked out Cristina Pacheco (11-13-2) in the first round on Saturday Dec. 14. The super featherweight fight took place at Harrisburg, Penn. Bantamweights Britain Hart (3-3-3) and Unique Harris (1-3-1) fought to a split draw after four rounds.

Summer Lynn (2-0) knocked out Nina Gallegos (0-5) in the second round of their scheduled four round fight on Sunday Dec. 15. The welterweight match was held in Gary, Indiana.