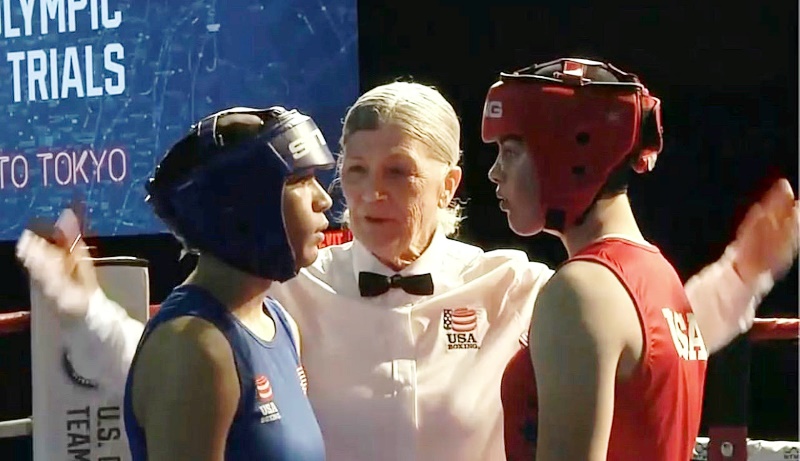 2019 US Olympic Trials – Lu Gutierrez and Other Winners

Huge congratulations to Lupe Gutierrez. Our girl Lu is the 2020 Olympic Trials National 125lb. Champion. She did it. We did it! I’ve known Lu since she was 10 years old. I met Team Sac’s Finest at my sister Blanca’s private gym BabyFace Boxing in my hometown Pacifica, CA. It was years ago that my sister first told me, “Lu’s going all the way to the Olympics.” My sister also promised Lu her a Corvette when she reached her goal. Not sure what’s going to happen there…But here we are.

I’m not exactly certain of how or when it happened, but I became an integral piece of Team Lupe. It’s an incredible feeling to be on this journey with such a sweet, extremely talented and humble athlete like Lupe. The highs and lows of both Reno National Qualifiers where she stamped her ticket to get here and the Olympic Trials itself made me realize how much I love this girl. Her wins were electrifying; we celebrated and quickly looked ahead to the next match. Her first and only loss was so very hard to take. We cried as a team, shook it off and moved forward. Lu was so protected, loved and cared for. That’s what a team does for their athlete. That’s what we do for Lu. She does the rest. All credit goes to the athlete.

I’m so excited for her as she takes the next step towards Olympic Gold. Her dreams are coming true and it couldn’t happen to a better person. All Glory to God for giving Lupe the ability and perseverance to reach her goal and to her Sac’s Finest Team. Great job coaches! Love you Lu. Go get it!

Returning home from the 2020 Olympic Trials, Youth Nationals & Junior Prep, December 7-16 in Lake Charles, LA took a few days to process all that had happened. Team NorCal (Northern California) had 5 Olympic hopefuls. However, only one advanced to the finals and only one came out victorious as the 2020 Olympic Trials National Champion. Lupe Gutierrez out of Sac’s Finest Boxing in Sacramento, fought 6 times last week, with 4 bouts back to back, to secure her spot in the 125lb. division. She went from seventh to the number one seed and will be representing her hometown, her state and her nation at the 2020 Summer Olympics in Tokyo. The Games will take place from July 25 to August 9 at the Ryōgoku Kokugikan.

Lupe or Lu has been boxing since the age of 10. She is a 2015 World Gold Medalist at Taipei, a 7-time Beautiful Brawlers Champion and 2015 WBC Amateur Champion.

Coach Sonya, the heart, soul and owner of Sac’s Finest, along with Head Coach Abel Calderon have dedicated their lives to their boxing team and we are seeing the fruits of their labor:

Since this was a double elimination tournament, Medina and Gutierrez fought in a box-off on Monday and Gutierrez won by split decision. Both boxers fought their hearts out and gained the respect and admiration of the crowds before them. Both now leave to Bulgaria in January.

Throughout the Trials, NorCal gym owners and coaches joined forces to ensure Team Lupe reached their goal. On Day 1, Sac’s Finest coaches lead the way with Sonya, Ernie and Abel. Leading up to the finals Coach Kris Lopez, owner of Lightning’s Boxing Club in Oakland and AIBA Coach Mario Bamberger along with Coach Abel stood in Lu’s corner for the next 2 bouts. Entering the finals and box-off, Coach Blanca Gutierrez, owner of BabyFace Boxing and Beautiful Brawlers in Pacifica who has worked closely with Lu since 2009, jumped in with Sac’s Finest Coaches Abel and Ernie finishing the week off with the goal in mind:

◦ Day 1: Lu Gutierrez defeated Texas’ Isamary Aquino
◦ Day 3: She defeated Southern California’s Iyana Verduzco in an exciting bout that had the entire crowd going wild!
◦ Day 5: Andrea Medina of Chula Vista CA defeated Lupe to advance to the finals.
◦ Day 6: Lu defeated Isamary Aquino in double elimination 4-1 advancing to the finals
◦ Sunday, December 14: Lupe defeated Andrea Medina forcing a box-off the next day.
◦ Monday’s box-off was a private show with 3 fights. With a 4–1 decision, Sacramento, CA’s Lupe Gutierrez is one step closer to her Olympic goal. But there is still a road ahead of her as well as the following 2020 Olympic Trials Champions:

Here are the other results

◦ 112: Virginia Fuchs, Kemah TX went undefeated at the Trials having some very tough, skilled fights against Southern California’s Heaven Garcia and New York’s Cristina Cruz.
◦ 125: Lupe Gutierrez, Sacramento CA took her victory over Chula Vista’s Andrea Medina at the box-off
◦ 132: Rashida Ellis, Lynn MA is another very nice and talented athlete who went undefeated at the Trials. She took two Bronze medals at the 2019 World Championships and Pan Am Games.
◦ 152: Oshae Jones, Toledo OH, is one of the sweetest yet toughest boxers in her division. She is a 2019 Pan Am Gold Medalist and 2019 Bronze Medalist at Strandja Tournament. Oshae also went undefeated at the Trials. She is flawless in her athleticism and aims to take it all the way to the top in 2020.

◦ 165: Naomi Graham, Colorado Springs won by walkover over Morelle McCane on Day 5 where she was left standing alone in the Ring, beating her in the finals.

We wholeheartedly thank guest writer Lupi Gutierrez for her willingness to cover the Olympic Trials on our behalf. She is based in San Francisco and her sister Blanca Gutierrez was in the corner of one of the winners Lupe Gutierrez. Normally we do not cover amateur boxing but in this instance we are getting a snapshot of the future of American boxing.