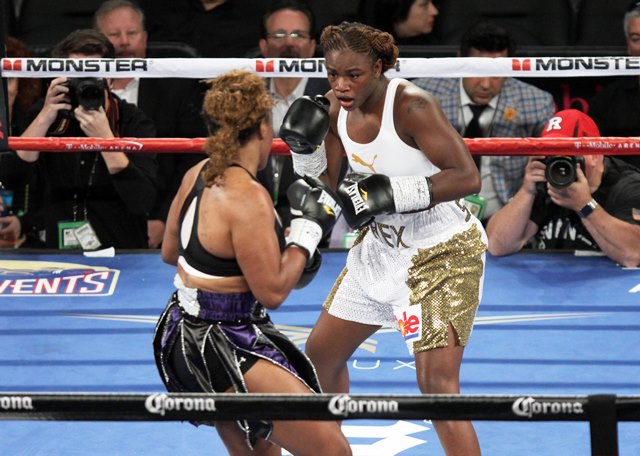 Three years ago Claressa Shields and Franchon Crews-Dezurn met in the boxing ring unceremoniously at the T-Mobile Arena in Las Vegas. Few paid attention to their clash that has become arguably the genesis for big time women’s prizefighting in the U.S.A.

Decades from now the boxing world will look back at that moment and realize when Shields and Crews made their pro debuts against each other on November 19, 2016, it sparked a forest fire of interest in the female boxing world.

American female prizefighting will never be the same.

Shields was voted Women’s Boxing Athlete of the Decade by the Sporting News for helping the American public realize that not only can women fight, but dominate, entertain and draw focus like never before.

“I just want to fight the best, be better and get better and by the time I’m done boxing or even while I’m boxing be considered one of the top 10 best boxers in the world,” Shields told Sporting News. “That’s my overall goal…at the end, I think that I’ll look at this list and be like ‘This list of accomplishments is crazy.’”

In two weeks Shields will vie for a third division world title when she meets Ivana Habazin for the vacant WBO and WBC super welterweight world titles in Atlantic City, New Jersey on Friday Jan. 10. Showtime will televise the fight.

Both former adversaries have been entwined in creating boxing history for the last three years and are continuing in different paths for different rewards.

When they fought against each other professionally female boxing was marginalized and hidden beneath male boxing matches with fighters whose athletic abilities did not compare to Shields and Crews. Not to demean the men that night but aside from Andre Ward winning by decision over Sergey Kovalev, the other bouts paled compared to the short but fierce war that erupted between Shields and Crews that night.

In front of less than 200 people in an arena that seats 20,000, the sound and echoes of concussive blows unleashed by Crews and Shields surpassed any others that night. Watching a boxing match on television does not compare to seeing it in person and hearing the blows land. Shields and Crews bounced blows off each other that were not rivaled by even those tossed by Ward and Kovalev. I kid you not.

Before that night, I had never seen either female fighter perform live. After their battle, I was immediately convinced that history was being unraveled in front of my eyes. Only once or twice before had I seen any female prizefighter exhibit speed or power on that scale. But that night not just one, but two showcased the future of women’s boxing.

Little did I know that more were coming such as Katie Taylor, Jessica McCaskill, Christina Linardatou, Marie Eve Dicaire, Maiva Hamadouche, and Helen Joseph were about to crash the scene.

Because I’m based in Southern California I was already familiar with Seniesa Estrada, Mikaela Mayer, Kenia Enriquez, Melissa St. Vil and Layla McCarter. But this new wave that arrived has stirred the pot to even hotter temperatures.

Abril Vidal (9-1) defeated Maria Angelica Ruiz (5-14-1) by knockout in the fifth round on Saturday Dec. 21. The super welterweight fight was held in three-minute rounds at Rio Negro.

On Saturday Dec. 28, super bantamweights Nazarena Romero (9-0) and Laura Griffa (18-4) meet in a 10 round fight for the Argentine title at Buenos Aires.

Lauryn Eagle (23-4-1) won by knockout in the second round over Siriphon Chanbuala (12-10-2) on Saturday Dec. 21. The super featherweight fight took place at New South Wales.

Cherneka Johnson (13-0) was the winner by unanimous decision after six rounds against Nurshahidah Roslie (14-4) on Wednesday Dec. 18. The super bantamweight fight took place at South Brisbane.

Rima Ayadi (1-0) won by unanimous decision after six rounds versus Ksenija Medic (0-18-2) on Saturday Dec. 21. The super lightweight fight was held in Calvados.

Tina Rupprecht (10-0-1) won by unanimous decision after 10 rounds against Catalina Diaz (6-3) on Saturday Dec. 21. The WBC minimum weight title fight took place at Hamburg. It was Rupprecht’s third defense of the title.

On Saturday Dec. 28, featherweights Phannarai Netisri (3-0) and Valeria Kovacs (2-4) meet in a six round bout at Bayern.

Saida Bukvic (5-0) was the winner by fifth round knockout over Marijana Dasovic (0-4) on Saturday Dec. 21. The super bantamweight contest took place at Polje.

Casey Morton (9-2-3) knocked out Saowulak Nareepangsri (8-18) in the fifth round on Saturday Dec. 21. The super flyweight match was held in Cebu.

Li Liu (3-0) knocked out Suphansa Phooong (1-2) in the first round on Saturday Dec. 21. The lightweight bout took place at Manila.

Shannon Courtenay (5-0) knocked out Buchra El Quaissi (2-1-2) in the fifth round on Thursday Dec. 19. The super bantamweight fight was held at London.

On Saturday Dec. 28, super lightweights Mia Ellis (0-0) and Uneaka Best (0-0) meet in a four round match at Atlanta, Georgia.