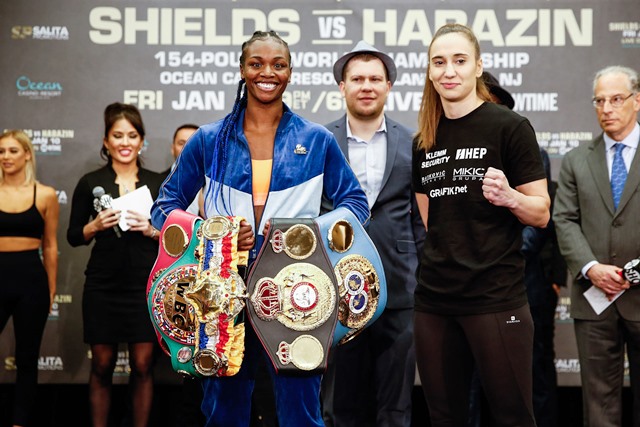 Meet the messiah of women’s boxing.

Three years ago Claressa Shields arrived with a bag full of gold medals, 168 pounds worth of confidence and bewildering fighting skills never seen before in female prizefighting.

The scary part for future foes is at age 24 she’s going to get better.

Since arriving in November 2016, the Michigan native with the flashy moves and relentless aggression has not only shocked and awed the boxing public with her ability, she’s also stepped into the roll as ambassador for American women’s boxing.

Last November, the two-time Olympic gold medalist arrived in Las Vegas to see smaller weight fighters Seniesa “Super Bad” Estrada and Marlen Esparza battle it out at the MGM Grand. It was a gesture seldom done before by a female champion – supporting other female fights.

“I feel I’m the face of women’s boxing. When there is a big women’s fight I should be there supporting women’s boxing,” said Shields by phone. “There needs to be a women’s representative like when these men fight you had all these big celebrities cheering for whoever is fighting the main event.”

At ringside, Shields watched and cheered for the participants of the WBA interim flyweight title fight that was eventually won by East L.A.’s Estrada. The appearance of Shields was a surprise for Estrada, the winner.

“It was a great surprise. I’ve always been a fan of Claressa Shields. I love her fighting style and her whole attitude,” said Estrada.

Later, Shields dubbed Estrada the “Little G.W.O.A.T,” which is short for Greatest Woman of All Time. Shields dubs herself Big G.W.O.A.T. and some take offense at the self-proclaimed title.

Not everyone likes Shields, but that’s OK.

“If I didn’t speak up for these women nobody will. I am showing them the way,” she said.

Very few female prizefighters in the past attained high profile status and those that reached that level rarely supported other female fighters. It’s what separates Shields from all other elite female fighters.

Shields also feels that many top promoters seldom put female fights on their major cards such as the Errol Spence Jr. fight in Los Angeles.

“I would love to fight on the undercard of an Errol Spence or Deontay Wilder. I would probably steal the show,” said Shields. “Right now, Christy Martin is still a known fighter because she fought on the under card of Mike Tyson. We need that kind of exposure.”

Despite fighting only once last year, Shields stays in gear for the upcoming year beginning with her fight against Habazin that includes pursuing a third weight division world title. This time it takes place at 154 pounds, a much lower fighting weight than she ever experienced before.

“Cecilia Braekhus was the reason I went down to 154,” said Shields of the welterweight world champion. “I came down to this weight because I was trying to get a fight with Cecilia Braekhus. But now she’s running away from me and wants to fight Katie Taylor.”

“She (Braekhus) knows that Katie won’t give her problems and she will have a size advantage,” said Shields. “She has been ducking Layla McCarter for so many years. I know Layla McCarter would be a hard test for Cecilia. She should have fought Layla who was the mandatory for three four years.”

On the other hand, Shields ducks no one.

When she first arrived in 2016 no professional female fighter was willing to face the two-time Olympic gold medalist, except for Franchon Crews.

“Me and Franchon had a war in our debut,” said Shields of Crews who fights on Saturday in defense of the super middleweight world title against Alejandra Jimenez. “If we fought again that’s going to be one of those fights that it’s going to be a war between two warriors.”

Success for the female fight world drives Shields to speak out, accept difficult fights and pump up attention for her fellow women prizefighters.

“Claressa has incredible awareness of the boxing world and what it needs,” said Mark Taffet, who advises and manages Shields. “She truly supports other female fighters.”

“You got to let them know,” says Shields. “I really don’t hate another female boxer. I’ve always known that we are stronger together than apart. Supporting each other is important. Not beating each other down.”

Other champions, not just female champions, have taken notice. Shields appears in person at major fight cards around the country giving support to the sport of boxing.

“She is doing a lot for women’s boxing,” said Estrada. “It’s one of the reasons I really like Claressa Shields.”

The winner will probably be the next foe for the winner between Shields and Habazin.

Napoleon-Espinosa, 33, fights out of New York and has looked impressive in her last five fights. The last two wins were accomplished via knockout.

“I’m honored to be on the card with these women and to be bringing this sport up together,” said Napoleon-Espinosa. “We’re pioneering for women’s boxing for all the women that are with us now and the women who are ahead of us.”

Cederroos, 34, is the mother of two and defeated Femke Hermans for the vacant IBF title last March in Belgium. Though a native of Sweden, the tall hard-punching fighter has fought mostly in Spain.

“This is a big dream coming true. Thank you for this opportunity,” said Cederroos. “I don’t know what to say, I’m just enjoying the moment. I’m for sure going to put on a great show Friday night.”