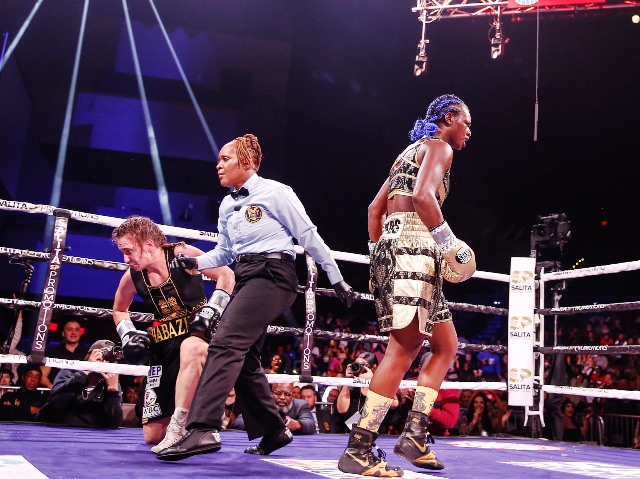 Oh, and she also scored her first official knockdown against someone who had never before tasted the canvas.

“This is great. I did it in 10 fights,” said Shields. “The fastest boxer in history to become a three-division world champ.”

Behind a blistering jab, Shields (10-0, 2 KOs) dominated Habazin (20-4, 7 KOs) in winning a third weight division world title in only 10 fights to become the fastest man or woman to reach the trifecta at Ocean Resort Casino in Atlantic City.

Vasyl Lomachencko and Kosei Tanaka accomplished the same feat in 12 fights in 2018.

After two prior scheduled meetings between the two female fighters had to be scrapped, Shields and Habazin finally met and the match was a one-sided affair.

Habazin opened up aggressively behind a one-two and Shields slipped one but not two of the blows. Then the two-time Olympic gold medalist unsheathed that potent left jab and quickly regained the upper hand in the first round.

Jabs were the key by Shields, who could have dominated the fight with the left jab alone. It was straight, fast and accurate and forced Habazin to reconfigure her own jab when she was unable to slip Shields left fist.

Habazin walked into the fight known for packing power as seen in recording seven knockouts in almost half of her fights. That’s a lot of knockouts when you consider most female fights are only two-minute rounds. But the Croatian fighter rarely scored with her left jab and was neutralized by Shields at almost every juncture.

The first three rounds saw Shields dominate with that bullet jab and every time Habazin tried to return fire, she hit mostly air as Shields slipped most of the incoming.

In the fourth round Habazin opened up and found success with rights to the head and the body. But it was short lived as Shields kept rifling that quick jab and punching to the body.

Shields took over completely by the fifth round as Habazin seemed to be looking impotent. A ceaseless body attack had Habazin unable to return fire and though she tried, she was off target.

After seeing her attack to the body prove successful, Shields opened up the sixth with another all-out attack to the body of Habazin and down went the Croatian. She went down to one knee and Shields hit her again unaware that Habazin was already down. The referee did not penalize Shields for the infraction.

“I tried to throw all body shots in the first minute and boom she went down,” said Shields of the knockdown. “This was my first drop. I never dropped somebody and this was with a body shot. It makes it even sweeter.”

During the final two rounds Habazin tried to mount an attack but was simply neutralized by her opponent’s defense and speed.

“I want to thank my coach, we spent so many months in camp for this fight,” Shields said of her trainer John David Jackson. “It wasn’t what I wanted. I’m happy with the improvement. But I dropped her with a body shot.”

Shields was not totally dismissive of Habazin.

“Hopefully she’ll win a world championship against somebody else,” Shields said of her beaten foe. “She couldn’t do nothing with me. Zero.”

Shields had hoped that she would be fighting Alicia Napoleon-Espinosa, but the New York fighter lost by close decision.

“I just want to become a better fighter. That’s all. I want to grow women’s boxing, I want to have equal pay, equal opportunity,” said Shields. “I would love to share a card with Deontay Wilder or Errol Spence.”

In a battle between super middleweight world titlists, it was Sweden’s Elin Cederroos (8-0, 4 KOs) who scored a critical knockdown of Alicia Napoleon-Espinosa (12-2, 7KOs) in the second round with a left hook to the chin that proved the difference in winning by close decision after 10 rounds and unifying the super middleweight title.

After suffering a knockdown, the much shorter Napoleon figured out how to attack Cederroos but couldn’t overcome the knockdown in 10 rounds, though she did mount an impressive counter-attack. It was close, but not enough according to the three judges who all saw it 95-94 for Cederroos who added the WBA title to the IBF title she already held.

“I thought I was ahead,” said Napoleon who attacked the body for all 10 rounds but was unable to knock down Cederroos. “I don’t think I lost this fight.”

During the post-fight press conference, Cederroos did not seem to be interested in fighting Shields.

For those unaware G.W.O.A.T. is an acronym for Greatest Woman of All Time.