Alejandra Jimenez Gets Split Decision Over Franchon Crews-Dezurn
Written by: David A. Avila 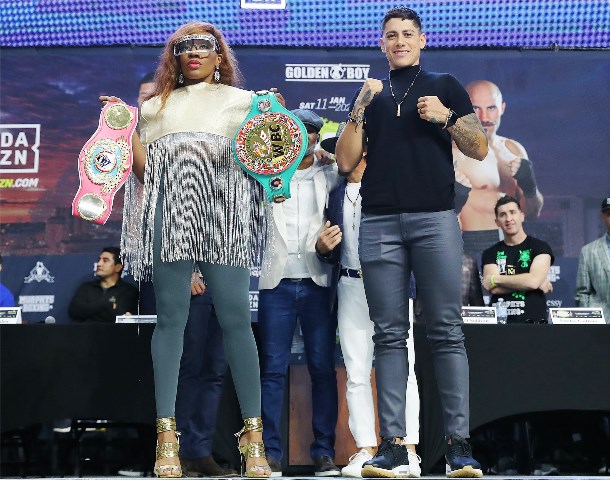 Looks can be deceiving or they can be telling.

Though it appeared Crews landed more blows she never showed a look of confidence. That proved her undoing.

Like a modern day monster Jimenez (13-0-1, 9 KOs), a former heavyweight champion, moved in slowly like a glacier absorbing blows from Crews (6-2, 2 KOs) in every round, but the more menacing figure never moved backward in front of a large crowd at the Alamodome.

From the opening round Crews was able to land flush blows but Jimenez seemed unfazed by the punches and continually moved in. Crews looked tired and worried almost from the beginning until the late rounds.

The display of concern by Crews was noticeable to the judges as well as the fans.

Jimenez shrugged off every combination landed by Crews and was able to tag the shorter fighter with some heavy shots, but a lack of speed in both her feet and hands kept her from being able to put the finishing touches.

Crews was the quicker fighter but looked worried and tired.

In prizefighting, fighters are taught to always show a poker face even after taking a painful shot, this makes it difficult for judges to determine whether a solid blow was hard or not. Crews never kept a poker face and that proved her undoing.

Both fighters traded hard combinations in the third round. Crews opened up with a four-punch combo that landed flush. Jimenez answered back with a five-punch combo of her own then the two got entangled.

“Twice she hit me with a good shot,” Crews said.

Crews seemed to land the more effective blows from the fourth round through the sixth. But after landing blows Crews held and appeared to be hanging on for survival, despite landing the more effective punches. It was all about appearance and though she was connecting with better punches she looked more survivor than winner.

The look of concern by Crews seemed to convince the judges to score the rounds for Jimenez who was out-punched but never appeared worried.

Jimenez targeted the body in the seventh round and for once was the busier fighter. Crews answered back with a flush one-two combination but the Mexican fighter’s work to the body was solid.

Lack of a body attack by Crews was a weakness, especially with Jimenez losing more than 60 pounds to make the weight limit of 168 pounds. Only a few times did the Baltimore-based fighter work the body. It could have turned the fight heavily in her favor.

Crews seemed to gain a second wind and began to box and move in the eighth and ninth rounds. She fired shots from long range and moved out of range against the lumbering Jimenez. But was it enough to convince the judges?

In the last round Crews and Jimenez slugged it out and each connected but neither was able to hurt the other. Both were happy by their performances and congratulated each other.

One judge saw it 97-93 for Crews but the two other judges scored it 98-92 and 97-93 for Jimenez. All scores were very wide considering that Crews seemed to land more blows throughout the fight. According to punch stats: Crews landed 197 punches and Jimenez 152. Crews connected on 36 percent while Jimenez at 24 percent.

A rematch would seem to be a good call.