Can 2020 Match 2019 for 10 Great Moments in Female Prizefighting
Written by: Felipe Leon 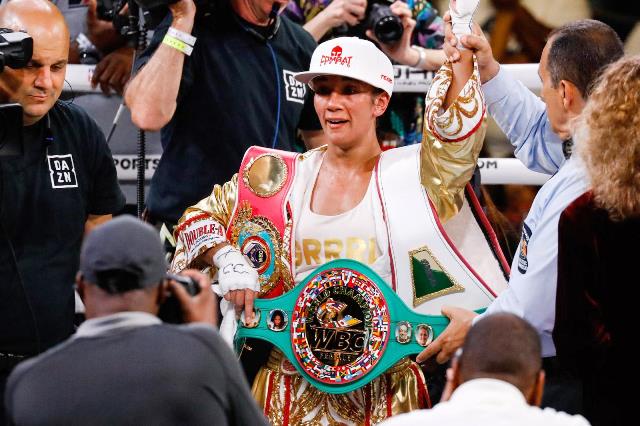 Last year followed the trend of the last half-decade as a solid one with good if not great fights in women’s boxing.  Little by little the sport is gaining ground not only within the world of boxing but in the sports world in general.

Female boxing is continues finding its place not only on major fight cards but also on the number of streaming applications, like DAZN and ESPN+, which are the major platforms boxing is distributed today.

The following 10 fights are what we consider the most game-changing of the last 12 months by either their significance or for being the first step towards something bigger in the future maybe as soon as 2020.

Friday, January 18th, Amanda Serrano KO Eva Voraberger 1st Round, Madison Square Garden, New York – Serrano, considered currently in the top four pound-for-pound fighters in the world, only needed 35 seconds to stop Voraberger with a devastating body shot.  More significantly the knockout scored Brooklyn’s Serrano the WBO super flyweight title.  That title marked Serrano’s seventh in as many divisions and after beating Heather Hardy, later in the year, she captured her ninth world title overall.  Serrano has not only cemented her place in the history of Puerto Rico but in female boxing.

Saturday, March 30th, Geovana Peres UD Lani Daniels, Sky City Convention Centre, Auckland, New Zealand – Perhaps the actual 10 round fight wasn’t by any means spectacular and as far as action inside the ring it doesn’t deserve to be on this list.  The reason it does belong was it’s the inaugural title fight for a light heavyweight women’s world championship.  Women’s weight categories previously jumped from super middleweight to heavyweight skipping over 175-pound and 200-pound weight limits until now.  Since capturing the WBO title, a sanctioning body that doesn’t bother in actually ranking female fighters, Peres has defended it once.  Is there a deep enough talent pool at 175 pounds to sustaining the division? We’ll soon find out in 2020.

Saturday, April 13th, Claressa Shields UD Christina Hammer, Boardwalk Hall, Atlantic City – If there is one thing Shields can be accused of is of being a history maker.  Her two gold medals for the United States in the Olympics was a first by any American boxer and now as a professional is continuing the trend.  With this dominating performance against Hammer, considered by many her best yet, Shields left no question who was the best middleweight in the planet and has the hardware to prove it.  With the win Shields unified the division collecting Hammer’s WBO strap and made Shields only the second undisputed champion behind Cecilia Braekhus at welterweight.

Saturday, June 1st, Katie Taylor MD Delfine Persoon, Madison Square Garden, New York – For the first time in her professional career Taylor looked beatable. It took Persoon, a police officer by day in her native Belgium, to push Taylor, an Olympic gold medalist, to the limit.  The result was a controversial one with many tallying up their scores with Persoon as the winner.  With the win razor-thin win Taylor unified the division adding Persoon’s WBC green and gold belt to the WBO she captured earlier in the year.  She already held the WBA and IBF versions.  Taylor became the third current female to unify her division behind Braekhus at welterweight and Shields at 160 pounds.

Friday, September 13th, Amanda Serrano UD Heather Hardy, Madison Square Garden, New York – Serrano needed all 10 rounds to defeat a game but over matched Hardy in her second outing at the Mecca of boxing for the year.  With the win Serrano captured the WBO title again at featherweight but more importantly the vacant interim WBC title.  With that green and gold belt it might set up a fight the female boxing world has been clamoring for years, against the full-fledged champion Jelena Mrdjenovich of Canada.  Even if it doesn’t, Serrano’s win over Hardy was a barnburner with Hardy displaying a barrel full of heart for the 10 round New York clash.  The candidate is an easy candidate for fight of the year.

Saturday, September 14th, Franchon Crews-Dezurn UD Maricela Cornejo, Dignity Health Sports Park, Carson – This is another result of a fight that hopefully sets up a bigger one in 2020.  Originally Crews-Dezurn was supposed to face-off against former WBC heavyweight champion Alejandra Jimenez of Mexico but when Jimenez was not able to secure a visa, Crews-Dezurn fought a familiar foe.  With two days’ notice Cornejo stepped into a rematch of 2018 fight for the vacant WBC super middleweight title. Crews-Dezurn defeated Cornejo once again in front of a large audience not only in the venue but on DAZN. It was even better than the first fight.

Saturday, November 2nd, Katie Taylor UD Christina Linardatou, Manchester Arena, Manchester, England – Many fans and media believed Taylor would look to clear her name after her controversial win over Persoon in her previous fight.  Instead Taylor looked for another challenge five pounds north and captured the WBO 140-pound title with an impressive win over Linardatou.  The victory gives Taylor a title in a second division and at the same time gets her closer to 147 pounds where a mega-fight could happen, or at a slightly lower catch weight, against Cecilia Braekhus.  Both are with DAZN and both have stated they are interested in fighting each other sooner than later.

Saturday, November 2nd, Seniesa Estrada TD Marlen Esparza, MGM Grand Arena, Las Vegas – There is no bigger platform in professional boxing than a Saul “Canelo” Alvarez fight.  A stage that big was needed for this much anticipated fight because of the bad blood between East L.A.’s Estrada and Houston’s Esparza.  The battle was an all-action affair, and candidate for fight of the year. For the majority of the three-minute war Estrada took the win and bragging rights over her arch-nemesis Esparza.  Will there be a rematch? Estrada doesn’t seem to want it while Esparza says the cut she suffered early on affected the outcome. Their three-minute round fight for 10 rounds also seemed to please fans, fighters both at the arena and watching on streamed locations.

Saturday, November 16th, Yamileth Mercado UD Fatuma Zarika, Poliforum, Ciudad Cuauhtémoc, Mexico – Our neighbors to the south have always been a world-class force in boxing whether it be male or female.  Mexico boasts the most female full-fledged world champions than any other nation with eight and Mercado is its latest one.  Her win wasn’t a spectacular one since Zarika never seemed to want to win the fight but the title does make its way back to Mexico.  The win might make it easier for Mercado to defend against Mariana “Barbie” Juarez, Mexico’s most decorated fighter who is looking for a fourth title in as many weight classes. Stay tuned.

Thursday, December 5th, Mary McGee TKO Ana Laura Esteche, Terminal 5, New York – It has been a long and arduous road to a world title for McGee. From hailing from a boxing cold front like Gary, Indiana, to at a time being homeless McGee has seen it all in her professional career.  The recent win makes her the first world champion from her hometown since the ‘40s and the win should bring her much deserved paydays.  The most significant result of her win is that it might set the table for a unification fight against the WBC/WBA super lightweight champion Jessica McCaskill.  There is no love lost between these two women and in boxing that tends to make for better fights.