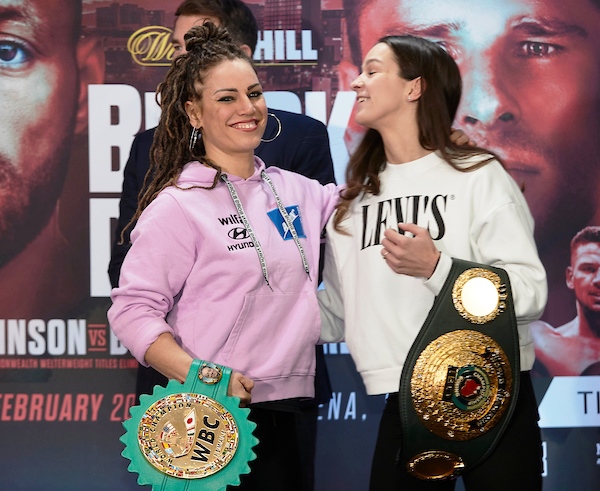 When Finland’s Eva Wahlstrom defends her WBC super featherweight championship against rising British star Terri “Belter” Harper it shapes up as a classic case of both experience versus youth and acquired wisdom versus raw power.

It will be little surprise if the ladies steal the show in the featured undercard bout on a high profile Kell Brook – Mark DeLuca card at Sheffield Arena this Saturday night. DAZN will stream the fight card.

Wahlstrom (23-1-2, 3 KOs) represents by far the biggest challenge Harper  (9-0, 5 KOs), has faced so far in her pro career, but from the way the fight has been billed it seems many observers feel the result is somewhat of a formality.

Much of the prefight press coverage has focused on the 23-year old Harper and her knockout percentage, and though Wahlstrom holds a far more recognized belt some UK media present Harper as an equally proven commodity.

“I feel like it’s the right time for me to come through and prove to myself this is where I belong,” said Harper.

As is the case with many female title matches there aren’t a lot of betting lines to be found, but an online search shows Wahlstrom as a considerable underdog, with Harper more than a 4 – 1 favorite.

Wahlstrom, making her 6th defense, takes it all in stride and arrived in England looking cheerful, relaxed and ready.

“I don’t feel I have to prove anything,” Wahlstrom told The Prizefighters.com. “As usual, I hope we’ll both be safe and that the better boxer wins. I don’t think she’s underestimating me, even though that’s how it looks in the media. Harper seems like a smart young woman, I am sure she knows that it won’t be an easy fight for either of us.”

“I can change my life on February 8th,” said Harper. “Eva is a solid opponent who has shared the ring with some great boxers over a long career. She has more experience but she’s nearly 40 and it’s my time now. It’s a good fifty-fifty fight, but I have youth on my side.”

“I feel my fitness will come through and the fight will be over in the mid to late rounds.”

In her eleventh year as a professional, the veteran Wahlstrom has faced some very solid opposition, including the elite Katie Taylor when she moved up to challenge for Taylor’s lightweight title in December 2018. While Eva lost a widespread decision, she hung tough against one of the very best pound for pound fighters in the game.

Even though it was her first and only loss, if Wahlstrom can equal that rumbling effort against Harper the youngster is in for trouble.

As usual in such matchups, the primary question involves how much Wahlstrom has left in the tank and how much of a toll the years of extreme training have taken.

The 39 year old Wahlstrom may seem vulnerable to emerging contenders and their promoters, but that doesn’t make it so. She isn’t ready to concede anything to Mother Time, and remains a tough assignment for anybody.

“During my whole professional career I’ve suffered from chronic tendonitis, and had bad days I could hardly walk. I can’t rely on my physics the same as I was used to, but I found ways to train including a lot in water and in a sport science lab as well, which is a good concept. I developed tactics and mental skills, letting opponents do most of the work and exploiting their mistakes.”

Both women figure to enter the ring in tip-top condition.

Wahlstrom says her counterpunching style may change for this fight, and she’s been working with trainer Risto Juvonen on being much more aggressive.

“I’m not actually expecting anything but I’m ready for everything,” promises Wahlstrom. I know she is well trained and hungry. I think my strengths are that I am versatile and able to change tactics fast if needed, and that I have a strong intuition I trust. I think I will solve things at the moment they happen, whatever she offers.”

Harper has ideas of her own, and the newcomer is being groomed as her promotional stable mate Taylor’s heir-apparent.

For Harper, signing with Eddie Hearn’s Matchroom Promotions gives her the potential for more relatively lucrative opportunities than most boxers, female or male, and a rare position in the women’s game. Harper immediately made the most of that situation last November with a strong performance against respected Viviane Obenauf, a worthy previous title contender.

“This camp flew by,” Harper told the press. “I’ve been getting lots of rounds in with different girls and training twice a day. We’ve seen that she’s open to the back hand. I feel like I’ve got long range (control), just getting straight one-twos when we’re in close. I won’t get dragged into a brawl.”

“I’m really looking forward to fighting back in Sheffield. Being local and having the home crowd behind me, the atmosphere is going to be electric. This is going to push me to win not only for me but every single supporter.

“I’m fighting for one of the most prestigious belts, in my opinion. I know there’s boxers out there who would give anything for this opportunity so we’re leaving no stone left unturned.”

At 5’6, Wahlstrom measures an inch taller, but Harper has a few inches on her with a reach listed at 65”.

The champion picks her openings with punishing precision and usually comes out ahead during exchanges. Harper employs an excellent jab, setting up her exceptional power.

A wild firefight inside favors the champion.

A methodically paced affair from a distance makes it a whole different story for the challenger.

Expect a bit of both. Styles make fights, but exactly how that actually makes them is a varying equation. It isn’t unlikely that each woman will wisely exhibit caution much of the time.

If you believe the oddsmakers it could be a long, lonely night for the visiting Wahlstrom, but she is not the type to succumb to pressure.

Expect her to show why she was undefeated for so long and why it took a special fighter like Taylor to beat her.

“I want to get back on my KO streak,” Harper concluded.

“I think it’s a fun fact that I have been boxing for as long as Terri has been alive,” mused Wahlstrom with a knowing smile. “So, we’ll see how it goes.”