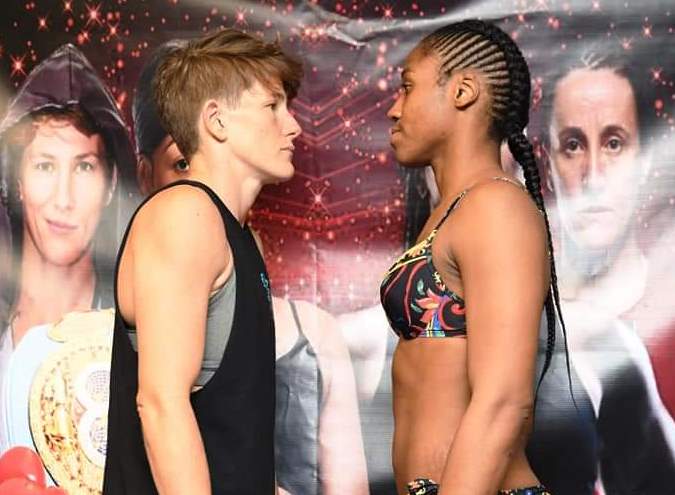 An impressive roster of top female prizefighters including IBF super lightweight titlist Mary McGee descends on the state of Indiana.

It’s been years since a female dominated fight card equaled this.

McGee (26-3, 14 KOs) defends the IBF title in a 10 round main event against Australia’s Deanha Hobbs (8-1, 5 KOs) on Saturday Feb. 8, at the Civic Center in Hammond Indiana.  The Triple Crown International Showdown fight card will be streamed at this link: Www.lrplive.tv .

Not since 2008 has a card as female dominated as this taken place. Twelve years ago a strong female fight card at Pechanga Casino in Temecula, California pitted Holly Holm vs Belinda Laracuente, Chevelle Hallback vs Melissa Hernandez, Lisa Brown vs Jeri Sitzes, Ana Julaton vs Carly Batey and Jennifer Barber against Hondi Hernandez.

This card in Hammond, Indiana may be even stronger.

This is McGee’s first title defense since grabbing it by technical knockout against Argentina’s Ana Laura Esteche this past December in New York. Now she gets another foe from across the globe in Hobbs whose only loss was to former titlist Christina Linardatou eight months ago.

“I’m my city’s first and only world champion,” said McGee. “This belt is staying home.”

McGee toiled in boxing for many years beginning as an amateur who was kicked out of her house for boxing. Now, after nearly 15 years as a professional, the Gary, Indiana native has the belt wrapped around her waist and it’s priceless.

“I chose to fight here in Indiana against a girl coming all the way from Australia in front of my people and build my own brand,” stated McGee who is co-promoting the event with DiBella Entertainment and others. “It’s for younger fighters coming up in my city after me.”

Hobbs has built a reputation as a rugged fighter as most Aussies are inside the boxing ring.

“I’m feeling great, so excited to be a part of such an amazing fight card,” said Hobbs whose lone defeat was against another of the participants on this fight card.

It was last June in Greece that hard-hitting Hobbs was dealt her only loss and that was against former world champion Christina Linardatou.

Linardatou, the former WBO super lightweight titlist, lost to Katie Taylor last November who then vacated the title. Now, she must deal with Prisca Vicot who fights out of Great Britain but is originally from France. The vacant WBO title is the prize.

Vicot, 44, is tall and experienced but can she survive the eruption of blows that follow whenever Linardatou steps in the boxing ring?

“I’m in very good condition,” said Vicot who holds the WIBF and GBU titles as a super lightweight. “I’m here to fight, face a good opponent and look for a new world title to show America who I am.”

Linardatou wants her former belt back.

“The best way to start the New Year is reclaiming the WBO title,” stated Linardatou.

St. Vil and Others

A third 10-round clash features popular Melissa St. Vil the former WBC Silver super featherweight titlist. The Brooklyn fighter will be moving up to lightweight to face Canada’s Jessica Camara.

St. Vil (12-4-4) has fought many of the best and has a reputation for never turning down a fight. She will be tasked on her lightweight clash against Camara (7-1) whose only loss was two years ago against Natalie Brown.

Several other bouts are planned including newcomer Ebanie Bridges (3-0) of Australia who fights Crystal Hoy (6-10-4) in a super bantamweight match.

Bridges won her last fight by knockout and was just signed by Split-T Management.

Another interesting match pits former middleweight champion Leatitia Robinson (15-1) versus Canada’s Claire Hafner (4-2) in a heavyweight contest. Robinson, 40, has not fought since losing 11 years ago.

Rounding out the female portion of the boxing card is Sarah French (4-2-1) versus Christina Barry (1-6) in a six round welterweight match.

Editor’s note: here is the link to the fight card: Www.lrplive.tv