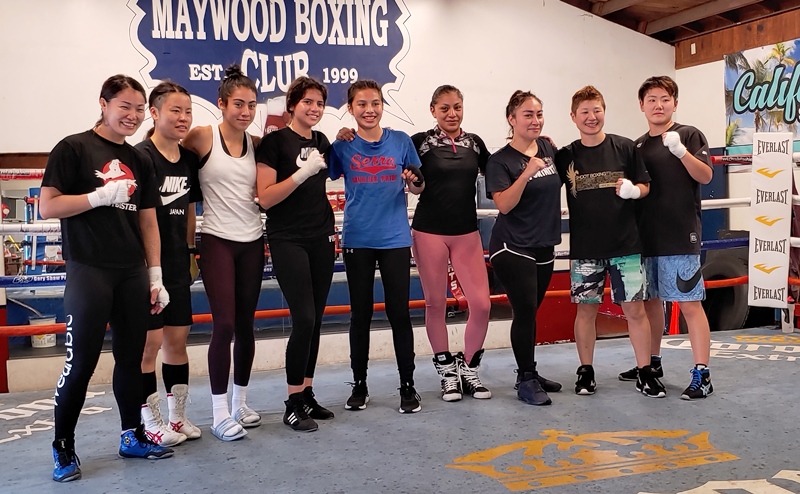 Earlier this week as the sun was setting to the west of Los Angeles, a plane was landing from the East.  Traveling in it were the current WBA female flyweight champion Naoko Fujioka (18-2-1, 7KO), arguably the best Japanese fighter of all time, and current WBO super flyweight champion Miyo Yoshida (14-1), both of Tokyo, Japan.

Here to do some sightseeing in Los Angeles, CA, Las Vegas, NV and San Francisco, CA, but more importantly to look for some quality sparring and training on the west coast of the United States.

“This is the second time I come to Los Angeles for sparring but this time I asked Miyo if she wanted to join me,” Fujioka said through interpreter Yuriko Miyata after a hard session at the Maywood Boxing Club in Vernon, CA, a suburb of Los Angeles.  “The last time I came to Los Angeles I was very impressed by the level of boxing here and that is why I wanted to come back.”

Linares, the former champion of Venezuela living in Japan, defeated Carlos Morales on Friday, February 14th, en route to a summer face off against Ryan Garcia.

At the Maywood Boxing Club both women had the opportunity to mix it up with up-and-coming prospect Adelaida “La Cobra” Ruiz.  Ruiz, an undefeated super flyweight from Los Angeles, is an aggressive skillful boxer-puncher often described as the Mexican-style.

“I wasn’t too familiar with her style,” Yoshida, a personal trainer by day, explained.  “When I realized her style was very aggressive, I tried to stay on the outside but I couldn’t because I wanted to fight.  That is my nature.”

“I want a big fight for my next fight against a big name in my division hopefully in the United States, a world famous fighter,” she said of her plans for 2020.  “I am not scheduled as of right now.”

If Yoshida accomplishes half of what Fujioka has, she would go down in the record books.

Fujioka began her career in 2009 and has captured titles at 105, 108, 112, 115 and 118 pounds and not specifically in that order.  She won her first, the WBC 105-pound title; by stopping current champion Anabel Ortiz in eight.  She defended that strap twice before jumping up to 115 pounds to capture the WBA super flyweight crown.  After defending it once, she suffered her first loss as a pro dropping the title to Susi Kentikian in Germany in late 2014.

She beat the legendary Mexican Mariana “Barbie” Juarez in a non-title fight in Mexico in her next fight before capturing the vacant WBO bantamweight title in October of 2015.  She suffered her second loss as a pro in her second visit to Mexico, losing a controversial close decision to Jessica “Kika” Chavez for the WBC flyweight green and gold belt.  A tenth round TKO over the tough Isabel Millan of Mexico in early 2017 gave her the vacant WBA flyweight title and in her next fight she captured the vacant WBO light flyweight version with a unanimous decision over current champion Yokasta Valle.

In her last fight she defended the WBA 112-pound title with a split draw over fellow Japanese veteran Tenkai Tsunami.

“I have fought against Mexican fighters a number of times,” Fujioka said.  “I feel the Mexican style is totally different than the Japanese.  The timing and the punch selection, location, the rhythm, everything is different.  To be able to fight the best in the world, she has to be used to it and that is why I come to America, to learn how to fight against that type of fighter.”

On the twilight of her career, Fujioka is looking for a major fight in the United States.

Last November popular East L.A.’s Seniesa “Super Bad” Estrada captured the vacant interim WBA flyweight title with a TKO win over archrival Marlen Esparza.  With the win, Fujioka feels that is the fight to make at any weight Estrada chooses.